This week, authorities in Florida announced another major bust surrounding Disney in which 108 people and a former judge were arrested for human trafficking in their latest sting.

“The arrests of a human trafficker and four child predators alone makes this whole operation worthwhile,” Polk County Sheriff Grady Judd said Wednesday. “Where there is prostitution, there is exploitation, disease, dysfunction and broken families.” 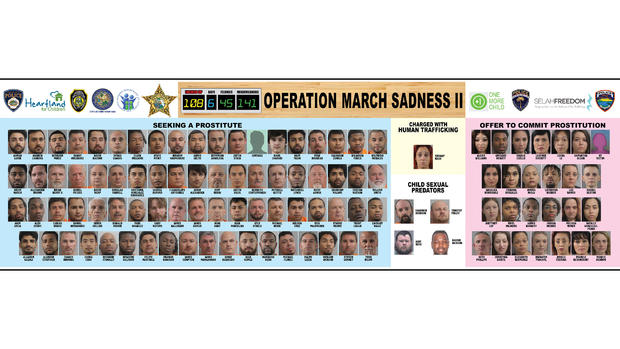 According to the video description, provided by 10 Tampa Bay:

Polk County Sheriff Grady Judd discussed more than 100 arrests made during an undercover operation that in part focused on human trafficking, according to the agency.

Out of all 108 arrests, one person was charged with human trafficking.

According to the sheriff’s office, 32-year-old Tiffany Nash was arrested for trafficking another woman. Deputies say they learned Nash repeatedly threatened violence against the woman, who is an adult if she didn’t prostitute herself.

Judd said Wednesday Nash was a manager of a KFC in Orlando.

The sheriff’s office says the woman victimized was provided assistance from Selah Freedom of Sarasota.

During their operation, which they called “Operation March Sadness 2,” detectives found prostitutes who had posted online advertisements through various websites and social media platforms to identify people who were seeking them out. They also identified adults who they thought were inappropriately communicating with children.

Undercover detectives then communicated online with these suspects before meeting them at a location and arresting them. Members of anti-trafficking organizations also responded, speaking with prostitutes and offering them services and counseling, the sheriff’s office said.

Officials identified four Disney employees as among those arrested. Xavier Jackson, 27, worked as a lifeguard at the Polynesian Resort for Walt Disney. Judd said Jackson sent inappropriate photos of himself and messages to an undercover detective who pretended to be a 14-year-old girl. He was charged with three counts of transmitting harmful material to a minor and one count of unlawful communication.

“We protected some little girl someplace that was groomed or potentially groomed by these evil, deviant criminals, thugs, that’s all they are,” Judd said about the four suspects at a press conference. “They’re dangerous people.”

The three others, who were allegedly attempting to solicit a prostitute, were identified by Judd as: Wilkason Fidele, 24, who worked at the Cosmic Restaurant at Walt Disney World’s Tomorrowland for four years; Shubham Malave, 27, who is on a visa citizenship from India and worked as a software developer for Disney; and Ralph Leese, 45, who spent nearly four years working in IT for Disney.

“He’s married,” Judd said about Leese. “So I’m sure Disney’s not pleased. I bet his wife’s not pleased, but we’re pleased that we arrested him.”

In a statement to CBS News, Disney confirmed that Leese, Fidele and Jackson have been placed on unpaid leave. It added that Malave is not an employee of the company.

Authorities also arrested a man who worked at a local family amusement park in Orlando called The Fun Spot and a former Florida judge. Both were allegedly seeking prostitutes.

Judd said Daniel Peters, 66, told detectives that he used to be a judge in the Cook County 4th Sub Circuit Court and a special assistant for legal affairs in the office of professional regulations at the Cook County Sheriff’s Office in Illinois. He was charged with soliciting a prostitute.

Judd warned that his office will continue to arrest those who violate the law.

“What amazes me is we could do another operation starting next week and fill this board up again,” he said. “And be sure of one thing: These chiefs and I will do just that. We’ll be back and if you violate the law, we’re going to take you to jail. That’s a guarantee.”

This ends when the people demand justice and bring it upon the heads of the wicked, but not until that time.

Article posted with permission from Sons of Liberty Media

Tim Brown is an author and Editor at FreedomOutpost.com, SonsOfLibertyMedia.com, GunsInTheNews.com and TheWashingtonStandard.com. He is husband to his “more precious than rubies” wife, father of 10 “mighty arrows”, jack of all trades, Christian and lover of liberty. He resides in the U.S. occupied Great State of South Carolina. . Follow Tim on Twitter. Also check him out on Gab, Minds, MeWe, Spreely, Mumbl It and Steemit