Narcotics and firearms bust in Fillmore

During the month of March 2020, detectives began an investigation involving Cary Roberts who was suspected of selling narcotics to residents in Ventura County. Detectives conducted surveillance and were able to gather enough evidence of Roberts’ involvement in methamphetamine sales. Based on the investigation, detectives were able to obtain search warrants for Roberts’ residence located in the 700 Block of 4th Street in Fillmore and a business associated to him located in the 700 Block of Santa Maria Street in Santa Paula.

On April 7, 2020, detectives executed search warrants at both locations associated with Roberts. Detectives contacted and arrested Roberts at his residence in Fillmore. While at the residence, detectives also contacted Billy Howard and Dana Baysinger. Both Howard and Baysinger reside at the residence and were arrested for misdemeanor possession of methamphetamine and drug paraphernalia, respectively. Detectives searched the residence and found methamphetamine, money, scales and packaging consistent with narcotics sales.

During a search of Roberts’ business, detectives located additional methamphetamine, a loaded firearm, ammunition and illegally possessed prescription medication. In all, detectives seized approximately 383 grams of methamphetamine and over 2,700 Oxycodone pills. Roberts’ past criminal history prohibit him from owning and or possessing any firearms or ammunition. Roberts and Howard were both subsequently booked at the Pre-Trial Detention Facility for a variety of charges. Baysinger was cited and released for misdemeanor possession of methamphetamine. 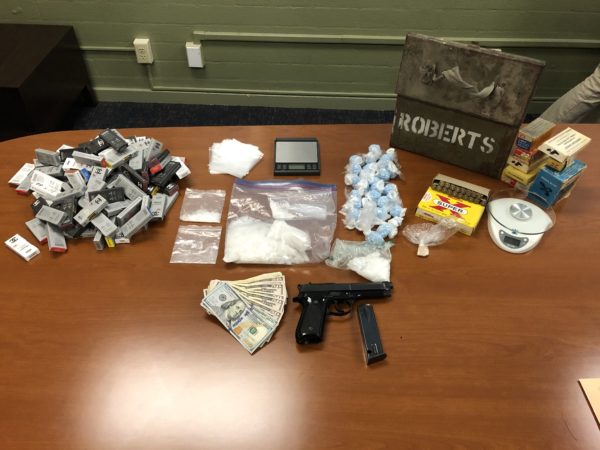