On March 26, 2021, the Sheriff’s Pharmaceutical Crimes Unit detectives concluded their investigation into Heidi Hexberg, a known narcotics dealer in Ventura County. She was also wanted for three felony arrest warrants issued by the Ventura County Superior Court and is on felony probation for drug related offenses.

Detectives were conducting a follow-up investigation in the City of Thousand Oaks when they spotted Hexberg driving her vehicle on Rancho Road near Thousand Oaks Boulevard. Detectives knew that she was a wanted person and on active probation, so they attempted to conduct a traffic enforcement stop on her vehicle.  Hexberg did not stop and accelerated away in an attempt to flee.   During the initial moments, Hexberg completed a quick and unsafe turn, and collided with the pursing deputy.  She did not stop for the collision and continued to flee.  During the pursuit, Hexberg threw methamphetamine out of her vehicle in an attempt to destroy it.

As the pursuit entered the 101 freeway, Hexberg accelerated to speeds that were too unsafe for the pursuit to continue.  Detectives stopped the pursuit.  Sheriff’s deputies receive extensive training in pursuit driving and decision making.  In this instance, detectives weighed the need to apprehend Hexberg against her unsafe speed and chose to disengage in the interest of public safety.

Although the pursuit was terminated, detectives continued their investigation into Hexberg. A short time later, Hexberg and her vehicle were found in the City of Agoura Hills.  She was arrested without incident.  During a search of Hexberg’s vehicle, detectives located methamphetamine, heroin, and Viagra pills not prescribed to her believed to be for sale.

Hexberg was arrested and booked at the Ventura County Sheriff’s Main Jail for 11351 HS- Possession for Sales of Controlled Substance, 11378 HS- Possession for Sales of Controlled Substance, PC 245(a)(1) Assault with a Deadly Weapon, 2800.2(a) VC- Evading an Officer with Willful Disregard, PC 135 Destruction of Evidence and the three outstanding warrants.  Hexberg remains in custody with bail set at $80,000.  Hexberg’s case was reviewed and filed by the Ventura County District Attorney’s Office.

The Ventura County Pharmaceutical Crimes Unit is a task force made up of members from the Ventura County Sheriff’s Office and the Thousand Oaks Police Department; the task force’s primary mission is combatting the transfer of legal prescription medication to the illegal market. In addition, the task force works to identify and stop new trends of abuse among the younger population and investigates overdoses due to both prescription medication and illicit drug use. 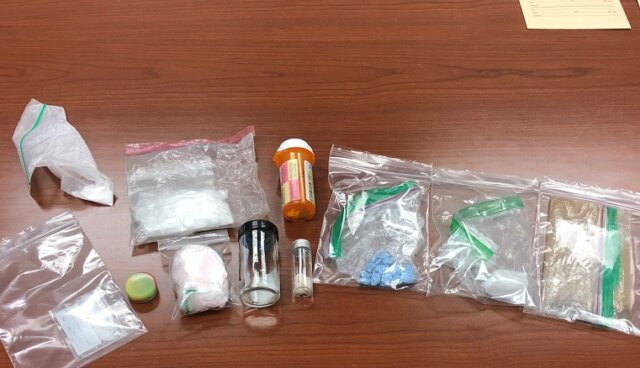