At 10 a.m. on Wednesday, multiple Netflix employees participated in a walkout to protest Dave Chappelle’s latest comedy special titled, The Closer. The workers, organized by a group called “Team Trans,” claim that the special is transphobic and demanded Netflix censor it immediately and then commit to putting out more transgender content.

But what is this “justice” to which Preston is referring? Was someone harmed in Chappelle’s skit? Were there victims from Chappelle refusing to toe the line of the woke cult who demands “intersectional” praise in all things Netflix — or else?

Who was harmed by Dave Chappelle claiming that “every human being on earth, had to pass through the legs of a woman to be on earth”?

Multiple times during Chappelle’s performance, he made sure to let people know what he was talking about. He wasn’t bashing trans people. He was bashing all people who constantly attempt to silence, censor, and otherwise attack the comedian over his free speech.

During his special he even goes into detail over one of his friends who he tried to elevate into the world of comedy by having her open for all of his shows in San Francisco. That person was Daphne Dorman, an aspiring transgender comedian and beloved friend of Dave Chappelle.

Chappelle had every reason to invoke Dorman during his performance as she was attacked by the woke trans cult on Twitter for defending the comedian and driven to suicide 6 days later. 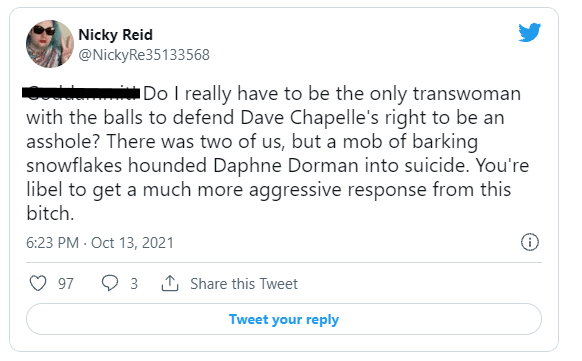 Illustrating just how non-transphobic Chappelle’s set was, is the fact that Dorman’s family came out defending it, accurately pointing out that Chappelle is trying to end the madness and find peace with the community.

“At this point I feel like he poured his heart out in that special and no one noticed,” Brandy wrote in a Facebook post. “What he’s saying to the LGBTQ family is, ‘I see you. Do you see me? I’m mourning my friend in the best way I know how. Can you see me? Can you allow me that?’… This was a call to come together, that two oppressed factions of our nation put down their keyboards and make peace. How sad that this message was lost in translation.”

Despite the peacefully and non-transphobic nature of Chappelle’s act, the entire establishment moved against him in unison in what appears to be a massive act of virtue signaling by the mainstream to appease the tyrannical woke cult. But don’t take our word for it. One need only look at how the Associated Press openly lied in a headline to demonize counter protesters at the Netflix walkout.

In an article about the protest, the AP openly lied and stated that “Comedian and videographer Vito Gesualdi screams profanities as he engages with peaceful protesters begging him to leave.

But this was not true. Gesualdi never once swore and he was the one who was attacked and had violence enacted against him. The only profanities being hurled are from the woke cultists screaming in his face and attacking him. The people in his face, pushing him back, breaking his property, and attacking him were not “peaceful protesters” as the AP falsely claimed in their story. Watch the video below for yourself to see it. Will the AP be fact-checked? Not at all.

The idea that these protesters stand for some altruistic cause for equality comes crashing down when they enact violence against others for practicing the same and equal right to free speech.

The fact is that these protests, including this recent one, are led by folks with bigotry and hatred flowing through their very blood streams.

The tendency of a sociopath is to bully via any means to achieve some perception of dominance. The person above used bigotry and hatred to bully her foes and now uses “anti-bigotry” to do the same. This is not only shameful, but it is incredibly dangerous.

The selective outrage mob has become so obsessed with identity politics and competitive victimhood that they are willing to attack the very rights that paved the way to ending things like discrimination against gays, Jim Crow, and other actual racist and discriminatory practices carried out in and by this country.

There is no moral imperative behind this movement other than silencing anyone with whom they disagree. Had these Netflix employees and their supporters been concerned about actual victims, perhaps they would have said something when the highly controversial “Cuties” movie was released on the platform. You know, the show that was actually indicted by a grand jury on charges of “promotion of lewd visual material depicting a child,” a state felony.