“Justice on Trial,” a new book detailing the events of Justice Kavanaugh’s Supreme Court confirmation, has been a resounding sales success, but the media refuses coverage.

Carrie Severino and Mollie Hemingway’s new book has achieved the #6 spot on the New York Times Best Seller list since its July 9 release, and was the #1 best seller on Amazon before it was even available. Despite breakout success and its thorough coverage of the Kavanaugh confirmation, CNN, MSNBC, AP, Washington Post, NYT and CBS have all turned a blind eye to the book. 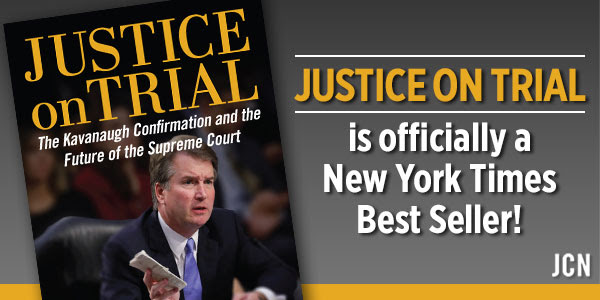 “Justice on Trial” has sold quickly in the 9 days since it became available. (CRC Strategies)

“The New York Times’ first mention of our exhaustively reported and heavily researched book about the most important thing that happened to the country last year was when they had to place us on their best seller list,” said Hemingway. “It is a sad reminder that many in the media are not interested in journalism but progressive advocacy.”

Despite media silence, the authors seem happy with the product of their labor and its reception from readers.

“We are thrilled that the book is not just a bestseller, but already making an impact,” says Severino. “There is still a real hunger out there to understand what happened during the national circus that was the Kavanaugh confirmation and how to prevent it in the future.”

“Justice on Trial” was also the best-selling nonfiction book on Amazon this week and made the Apple Books top 10 list. It was the #2 best-selling book for Barnes & Noble last week. (RELATED: TV Ignores Conservative Authors Of No. 1 Book In The Country, While Putting Liberal Author Of No. 3,421 Book On Major Tour)

Severino and Hemingway’s account contains several revelations about the Kavanaugh confirmation process, such as the fact that “Justice Kennedy was eager to help” Kavanaugh get confirmed. According to the authors, when the Trump administration approached Kennedy for potential candidates to replace him, he offered up a list that placed Kavanaugh in the top five.

“While Kennedy called his other clerks good or excellent, he tended to describe Kavanaugh as brilliant,” the authors noted.

“Justice on Trial” also contains incendiary new allegations about Christine Blasey Ford. According to the authors, Ford was a “heavy drinker” during her high school years and was also known for aggressively accosting her male peers while she attended Holton-Arms School.