New Life conference attendees challenged to ‘get up’; no more paralysis

OXNARD—Pastor Sammy Rodriguez of New Season Christian Worship Center in Sacramento, challenged the 1,000 attendees at the first annual New Life Conference, on Saturday to “get up” and end their season of (metaphorical) paralysis in a message he entitled “More than a Mat:  My testimony.”

Rodriguez (president of the National Hispanic Christian Leadership Conference, the largest Hispanic Christian Protestant organization in the world with over 40,000 Latino Evangelical churches as members) said that his message was based on two separate gospel accounts of paralytics healed by Jesus taken from Mark 2:1-12 (the paralytic that was lowered through the roof) and John 5:1-16 (the paralytic who had an infirmity for 38 years lying by the Bethesda pool).

“Who are you?   If you don’t know who you are in Christ, you will be paralyzed,” said Rodriguez.   “Jesus is the one who defines you.   You need to surround yourself with people not paralyzed, not broken, not wounded.  Don’t give anyone access to your mat.  You need to pick it up and begin to walk and then your paralysis will come to an end.  You don’t want your children or their children to trip over it.

“Paralysis ends with me.  Tell others, I don’t live there anymore.  You don’t live in sin, failure, depression, anxiety, fear or addiction.  I am a new creation by the blood of Jesus, the Spirit of God, and the Word of God.   Your children, your children’s children and their children will not inherit your sin but your blessing.”

Rodriguez, 49, who is an ordained Assemblies of God pastor and executive producer of both Breakthrough and Flamin’ Hot as well as author of “Be Light” and “You Are Next”, said that he was forever changed when he had an affirmation  from the Lord on March 29 while at his home. Rodriguez said he never faced such spiritual warfare as the week before Breakthrough was to be released.  The affirmation came in the form of a shooting star that covered the entire sky.

“I reclaimed the power of His blood—the blood of Jesus and began to declare prayers” using olive oil.   “I knew my faith and future would never be paralyzed again.  Paralysis came to an end.”

Pastor Madu spoke on “Get Out” and “Get Up” using the stories of Jairus (a ruler in the synagogue) pleading with Jesus to heal his daughter and that of a woman with an issue of blood being healed by Jesus after touching his garment (Mark 5:21-43).  According to Pastor Madu, “Jesus has the power and authority (to heal) and we must become aware of this authority” and become like Jairus who “watched a miracle (the woman who was healed) while waiting for a miracle.”

Also, speaking on Saturday morning was Pastor Ben Prescott of Free Chapel Orange County (son-in-law of Pastor Jentezen Franklin founder of Free Chapel, a multi-campus church based in Gainesville, Georgia with seven campuses in three states).   Pastor Prescott spoke on the Damascus Road experience when Saul was converted by encountering Jesus and then sent to Ananias to grow in the faith (Acts 9:1-19). He then challenged New Life conference attendees to develop a prayer life; seek the right position; and the right people.  “Will you receive (the Lord’s) promise?   Will we move away from a spirit of fear and move from facts to truth (found in Jesus).”

The New Life conference was hosted by founding Pastors Steve and Tami Abraham (who started the church with a group of about 50 people in 1997 in an Oxnard hotel).   Today, almost 4,000 people call New Life their home church. 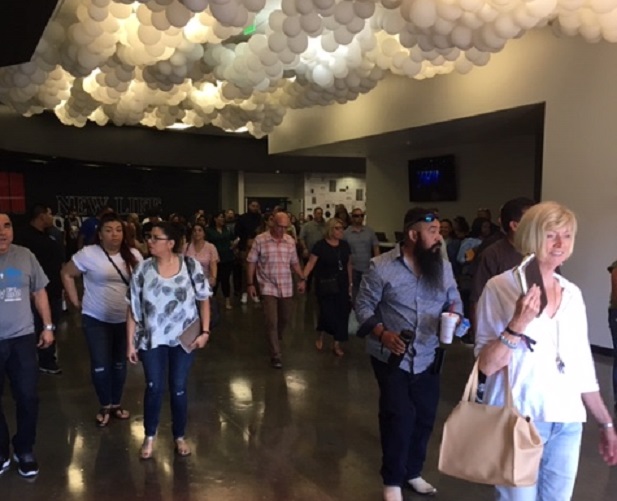 Michael Hernandez, Co-Founder of the Citizens Journal—Ventura County’s online news service; editor of the History Makers Report and founder of History Makers International—a community nonprofit serving youth and families in Ventura County, is a former Southern California daily newspaper journalist and religion and news editor.  He has worked 25 years as a middle school teacher.   Mr. Hernandez can be contacted by email at [email protected].