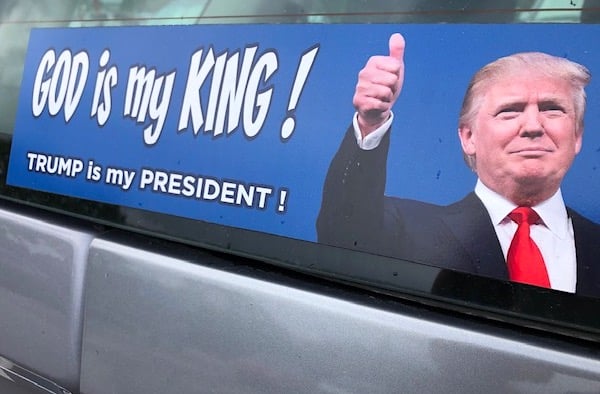 A “reporter” for the leftist New York Times has suggested on social media that supporters of President Trump are “enemies of the state,” a category of offenders that could face charges of treason, sedition and conspiracy.

And if convicted, executed.

The definition in the U.S. Code specifies such an “enemy” is “any country, government, group, or person that has been engaged in hostilities, whether or not lawfully authorized, with the United States.”

It is, according to a report in the New York Post, Times reporter Katie Brenner who applied that label to supporters of the 45th president.

“As Americans, we believe that state power should not be used to work against a political figure or a political party. But what happens if a politician seems to threaten the state? If the politician continues to do so out of office and his entire party supports that threat?”

She then claimed that since a DOJ investigation of the now-debunked Russia collusion claims made up by Democrats against the 2016 Trump campaign failed, and Democrats failed twice in Congress in their successful impeach-and-remove campaigns against Trump, the situation is all “unresolved.”

It didn’t take long for the response to develop, and not much after than for Brenner to frantically delete those wild claims against the millions of Americans who elected Trump in 2016 over twice-failed Hillary Clinton, and the 74 million or 75 million who voted for him in 2020.

Brenner excused herself by claiming the social media statements were “unclear,” but no one was buying her message.

And journalist Glenn Greenwald pointed out, “This is a reporter — not an op-ed writer — saying this.”

It’s one-sided because Pelosi picked the Democrats to be on the committee, then picked two Republicans who have aligned with Democrat agenda points after rejecting several members of Congress tapped by House Minority Leader Kevin McCarthy.

The report said Brenner was casting doubt on whether the committee would solve the problem that remains “unresolved” following Democrats’ multiple failed attempts to destroy Trump while in office and after.

“Here we have an NYT reporter, channeling the views of the corrupt FBI and DOJ officials who leak to her, straight-up saying that your political opposition to the ruling regime makes you an enemy of the state by definition,” the Federalist co-founder Sean Davis WROTE.

At the Gateway Pundit, a report noted, “She approves of BLM but wants patriotic Americans labeled enemies of the state. What a sick woman!”

Nutty flipping left wing loon. It’s like these media types all went to the same movie and came out of the theater as Loon Bots. Group think at its worst.

Meanwhile, patriots have already discovered you can’t use words to stop the Democrat-Media Complex.

Boycott the New York Times, and get others to do the same.

Katie Brenner of the NYT? Really? Just another hateful loon in the nut-house media. Problem is, they’re the propaganda wing, for the democratic party…and, the current administration, is as far left, as it has ever been. Be forewarned. This is how Stalin, Hitler, Mao, Pol-pot, Idi Amin…and a host of others, began their purges.

“This is how Stalin, Hitler, Mao, Pol-pot, Idi Amin…and a host of others, began their purges.”

And to all you doubters out there, chew on this:

“The free West has lost ground against the resurgence of Communism, rebranded as Progressivism, because it has simply allowed itself to be overrun. It can turn the tide by opening its eyes and fighting back. Stand by the truth and refuse to buy into the Left’s linguistic manipulation. Do not tolerate their intolerance. Reject their demonizing labels. Push back against their violent bullying. Resist as relentlessly as they attack. Easier said than done, but the alternative is surrender to an enemy that will show no mercy.”