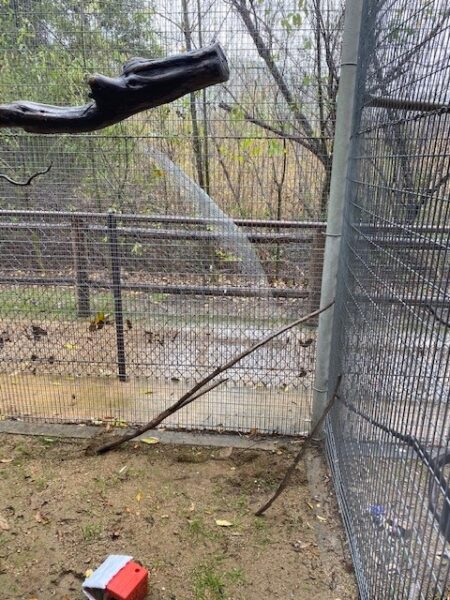 On January 4, 2023, at approximately 3:00 AM, the Steckel Park Bird Aviary caretakers were tending to their nightly chores of taking care of their birds when they discovered their pet Umbrella Cockatoo named “Julie” had been stolen from its habitat. An unknown suspect had cut the habitat wire siding and stole the Cockatoo.

Deputies responded and collected evidence at the scene. The caretakers quickly notified several social media platforms of the missing Cockatoo. Later the same morning, an anonymous party called in a valuable tip pertaining to the theft of the Cockatoo to Ventura County Crime Stoppers. This tip was relayed to the detectives who immediately began working on this case.

The investigation led to the identity of Santa Paula resident Michael Wear as the suspect who stole the Cockatoo. The same afternoon, detectives contacted Wear in the 400 block of Blanchard Avenue in the city of Santa Paula where additional evidence was obtained confirming Wear had stolen the Cockatoo. Detectives developed more leads and subsequently rescued the Cockatoo where it was being held by an acquaintance of Wear. The Cockatoo was unharmed and reunited with the caretakers at the Steckel Park Bird Aviary.

On January 9, 2023, detectives obtained a felony warrant for Wear from the Ventura County District Attorney’s Office for one count of felony Grand Theft and one count of Grand Theft of Domestic Fowl.

On January 10, 2023, at approximately 8:30 PM Santa Paula patrol officers arrested Wear in the 400 block of Blanchard Avenue. Wear was booked into the Ventura County Pre-Trial Detention Facility. Wear remains in custody in lieu of a $10,000 bail. Wear’s next scheduled court date is January 11, 2023.

The Steckel Park Bird Aviary was built in 1926 for birds of all feathers, over the decades the aviary housed exotic birds from around the world as well as the more run of the mill variety including pigeons, turkeys, peacocks, and quail. Julie the Cockatoo is valued at approximately $2,500.00.

The Ventura County Sheriff’s Office would like to thank members of the public for their on-going support and due diligence in providing information to assist our agency in solving crimes. We are better at what we do because of our community partnerships.