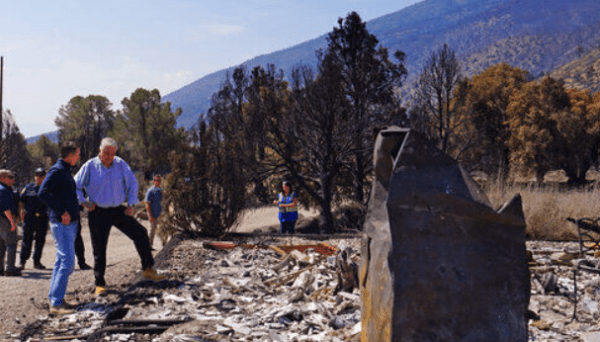 (The Center Square) – California Gov. Gavin Newsom and Nevada Gov. Steve Sisolak toured the aftermath of a wildfire that began in California but grew to a blaze spanning two states.

The Tamarack Fire began with a lightning strike in a rocky portion of the Mokelumne Wilderness that was deemed a low priority by responders. But, high winds on July 16 were enough to fuel the flames into a fire that InciWeb estimates has burned more than 68,000 acres of mostly federal land and commanded more than 1,300 personnel. It’s more than halfway contained as of Wednesday morning.

“There was a sense that this thing was going to be under control,” Newsom said. “It’s cost property, lives. Those that survive will never get back those memories.”

The two governors, both Democrats, met with reporters in western Nevada Wednesday morning.

Both Sisolak and Newsom praised the efforts of federal, state and local firefighting personnel, saying the men and women should be paid more for their work.

“I cannot begin to thank you all enough for what you are doing,” Sisolak said.

The messages of praise quickly parlayed into sharp critiques of federal responses to western fires going back decades.

“At the end of the day, The U.S. Forest Service is underpaid and understaffed,” Newsom said. “It’s remarkable that these guys are willing to raise their hands.”

Sisolak said that, had there been adequate resources, “we could have knocked this one out early and prevented this damage.”

Newsom said California has entered into a memorandum of understanding with the federal government for a more pronounced response to western forest fires but says it’s yet to be funded. He said the effort needs better forest management and better technology to predict growing fires.

“It requires a radical approach to governance,” he said. “We need more active forest management.”

According to information from CAL FIRE, 4,566 fires have burned an estimated 458,000 acres in 2021. However, there have yet to be any fatalities tied to the wildfires, the agency says.

Both Newsom and Sisolak are set to meet with President Joe Biden later this week.