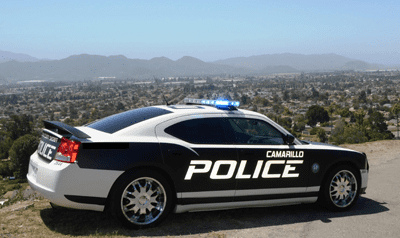 Narrative:Repeat offender, Brandon Harman, led deputies on a short foot chase in the 5000 Block of ViaCalderon after he was seen attempting to enter locked vehicles. Harman was apprehended andfound to be in possession of stolen property, burglary tools, and narcotics.

Recently, the city of Camarillo has experienced an unusually high volume of nighttime thefts.Criminals have been using the cover darkness to steal vehicle components and property frominside unlocked vehicles. As a result, deputies from the Camarillo Police Station have beenaggressively patrolling neighborhoods during the overnight hours looking for any suspiciousvehicles or persons. This has included augmenting typical overnight patrols with specializedunits, including the Camarillo Special Enforcement Detail and Directed Enforcement Unit.On 01/22/2022, at about 3:09 AM, a resident of Via Calderon received a motion alert from theirhome security system at the front of their property.

The resident reviewed video surveillance covering their front yard and saw a male pulling on door handles of locked vehicles on the street.The resident promptly called 911 to report the suspicious male.Deputies were on scene moments after the resident reported the suspicious male and begantheir search for him. A short time later, Harman was located crouched down behind a vehicle ina resident’s driveway. Harman was wearing dark clothing that matched the description providedby the reporting resident. Upon being located, Harman stood up and ran away from the deputy.

After a short foot chase, the deputy caught Harmon and struggled to take him into custody. Withthe assistance of additional deputies arriving on scene, Harman was secured in handcuffs.Harman sustained minor injuries during the incident.

Harman was arrested for Prowling, Vehicle Tampering, Resisting Arrest, Identity Theft,Possession of Stolen Property, Possession of Burglary Tools, and Possession of Narcotics.Harman was booked at the Pre-Trial Detention Facility and his bail was set at $40,000.Harman’s next court date is scheduled for 02/08/2022.

Shortly after booking, deputies identified Harman as the suspect of a theft from vehicle in the1600 Block of Daphne Street. This incident occurred on 01/21/2022, at 6:05 AM. Videosurveillance from this incident captured a male suspect entering an unlocked vehicle parked inthe driveway of the residence. Harman was not only identified as the suspect in the video, but hewas also in possession of the property stolen from the vehicle during his arrest on 01/22/2022.Deputies returned to the jail and arrested Harman for an additional count of theft.During the commission of these crimes, Harman was out of custody on bail awaiting sentencingfor similar offenses committed in Camarillo in March of 2021.

Residents are encouraged to ensure no valuables are left in their vehicles and are encouraged toalways lock their car doors when the vehicles are left unattended. Most thieves engaged in thistype of criminal behavior pass over locked doors and move to those that are unlocked to prey onvictims. Additionally, the Ventura County Sheriff’s Office has established a secure database tolog information about the location of residential surveillance systems. This will assist ourdeputies during criminal investigations similar to the one described above. If you wish to registeryour surveillance system with the Camarillo Police Department, please call (805) 388-5100 oremail [email protected]

Ventura County Crime Stoppers will pay up to $1,000 reward for information, which leadsto the arrest and criminal complaint against the person(s) responsible for this crime. Thecaller may remain anonymous. The call is not recorded. Call Crime Stoppers at 800-222-