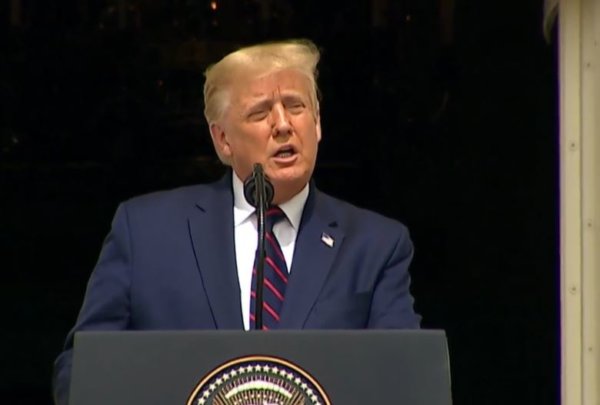 Officials have canceled a rally in a public park in Alabama after discovering that it would be former President Donald Trump who would be speaking.

It may be the latest iteration of Trump Derangement Syndrome, the affliction that causes his political opponents to take the opposite stance on any issue, just because it opposes Trump.

Some suggest that Joe Biden’s decision to obliterate security measures at the southern border, allowing hundreds of thousands of illegal aliens to move into the U.S. to claim public benefits, was because of TDS.

The Wall Street Journal editorialized not long ago, “Research has shown that TDS appears in five stages, each of advanced intensity. Perhaps there will be some value, if not promise of diminishment, in setting these parameters out for public awareness.”

It continued, “The cause of TDS is clear enough—Donald Trump, his looks, his manner, his nearly every utterance. So far there is no known cure. Ventilators are unnecessary in TDS, for people who progress beyond the first stage tend to vent quite vigorously on their own.”

It explains that afflicted by stage three, for example, one is ready to believe “anything—anything pernicious or salacious, that is—about Mr. Trump and to reject anything he has done that might be good for the country, if only because he is the man who did it.”

It is the Gateway Pundit that reported a park commissioner in Alabama said the event scheduled for Saturday was dropped “after” it was learned Trump was invited.

The event was to be at the USS Alabama Battleship Memorial Park. Park officials said that “no partisan events” were allowed, the report explained.

That’s even though the state attorney general confirmed partisan events were allowed as long as the applicants had equal access to the process.

But the timing of the announcement, just five days before, is suspect.

The request reportedly was made to Alabama Attorney General Steve Marshall on May 26 but it apparently wasn’t mailed until June 11 and received on June 14. He wrote his response on June 16.

Officials said, “After the request was made, then there was contact with the Republican Party, they contacted us and then it became apparent that it was going to be a partisan political event, rather than just a patriotic event planned for that evening.”

Tunnell’s verdict? “Due to the imminence of the date of the proposed event, my Opinions Division is unable to timely respond with an official position.”

But he said case law says parks may be used for political events provided access is “available for all political parties and candidates on an equal basis.”

Columnist Jonah Goldberg explained one possible complication of the TDS epidemic among Democrats and liberals was a significantly different COVID pandemic than might have been.

He noted, “A remarkable consensus has emerged in the last few weeks: It’s no longer crazy to think that the COVID-19 pandemic was the result of a ‘lab leak’ in Wuhan, China.”

He explained the theory isn’t that China deliberately unleashed the virus as some sort of biological attack.

“No, the theory is that this was some sort of accident — quite likely the deadliest and most costly accident in all of human history — and that the Chinese government covered it up. While not as villainous as a deliberate release, that would nevertheless be a monumental outrage because it would mean precious time was squandered that might have been better spent containing the outbreak before it became a pandemic. The death toll as of now is at least 3.5 million worldwide and roughly 600,000 in the U.S.”

He said the theory was rejected by media, public health officials “and virtually the entire Democratic Party as a dangerous and debunked conspiracy theory.”

He explained “a key driver of the groupthink that drove the dismissal of the lab-leak theory was the media’s unremitting hostility to, and distrust of, Donald Trump.”

“Trump had floated the lab-leak theory often. He even suggested that China’s failure to alert the world earlier was intended to cost him the election,” Goldberg opined.

He pointed the situation was so egregious, “For four years, if Trump said ‘the sky is blue,’ someone in the mainstream media would respond, mockingly, ‘Well, actually, scientists say … blah blah blah.'”

TDS, he said, “is an overused, often-abused term that nonetheless describes a real phenomenon.”

LMAO PEOPLE Need to grow up and stop acting like jealous BRATS.

Trump is/ has been a loser all his life. Nothing but a liar, thief and grifter. Funny, the dummy would have probably got away with everything, but he wanted to be a king!