It has been a while since we last talked or met. I think the last time we talked was at the old Social Security building, a few times in the past two years when you announced to us (CORE) and other community organizations and leaders your intentions to revising the two original Oxnard Civil Gang Injunctions (OCGI). You law enforcement folks saw the adverse decisions being render by courts up and down California that much of the language of the ill-conceived and hastily drafted Civil Gang Injunctions in California were being challenged, and upon judicial review were not passing judicial muster and where in eminent danger of being struck down and rendered unconstutional. Under your leadership the OPD, and the Ventura County District Attorney’s Offices, saw the writing on the wall and decide to drastically rewrite and modify significant language of the original OCGI. 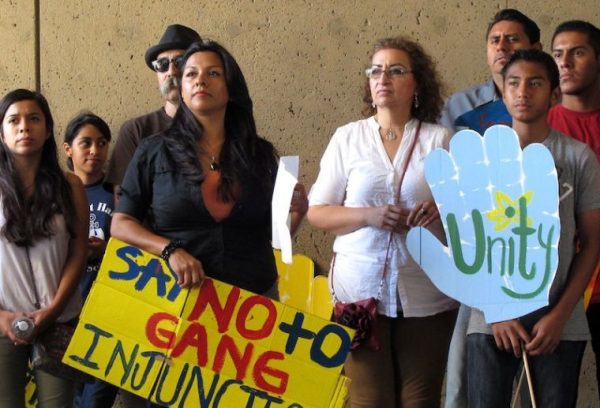 Chiques Organizing for Rights and Equality (CORE) has been fighting for the abolishment of both the Colonia and Southside Oxnard Civil Gang Injunctions since their inception in 2003-2004 on the simple grounds that they are racist, profile a specific class of Oxnard residents (Latino men) and are unconstutional, not to mention horrifically written and ambiguous. ABOLISH THE TWO OCGI NOW!!!!

CORE further contends that the two new and “revised” Oxnard Civil Gang Injunctions are nothing more than pathetic political “boogieman” theatre intent only on keeping the community in fear,  in darkness and continuing to project the OPD’s “tough on crime”  posture that always overwhelming wins support from the frighten and head in the sand residents.

The cold truth is that, last year the Ventura County Superior Court gave you the green light to proceed with the execution of your new and revised OCGI. Today your new, shiny, and revised OCGI documents and court orders collect dust in your OPD offices and the offices of the DA. Today, Tuesday June 9, 2020, you folks have served no one in Colonia or Southside!!!! So much for the urgency to get the Superior Court to approve the modification to clear the street of the gang lawlessness and violence.   You are a smart man Scott, you can see that the time has come to rescind both the Colonia and Southside Oxnard Civil Gang Injunctions, you are the wrong side of progressive safety reform. ABOLISH THE TWO OCGI NOW!!!!

You’re an intelligent, educated and a progressive man Scott and of course you see what is happening across the nation a demand for police accountability, transparency and massive reform movement had taken hold that will not be denied. You and I have worked with 5 different OPD Chiefs over a turbulent 20 plus year period. We both want safety in our community of Oxnard. Our approach to community safety is diametrically, 180’degrees different in philosophy and practical approach. There is a national paradigm shift, that can no longer be ignore it is bigger than you or me. Dramatic police and community safety reform changes will happen with or with you or me. History will judge you as courageous progressive or an out of touch Chief that is control by a very weak city council and an obsolete “toothless tiger” police model that often does more harm than it protects and serves the community.

This is what CORE proposes as ways of make progressive, cost effect, and community safety and strengthening improvement measures. Abolish your fiscally wasteful, and programmatically questionable PALS programming that is currently budgeted at about $750,000 on a year basis. The PALS is public relation program (COP TOOL). Scott, get your cops out of PR and Recreation services. You cops do not do a good job as recreation staff, you cops know it.  Abolish immediately your pathetically and useless DARE monster car program that teaches no one  or inspires no one and spends close to $100,000 tax payer dollars each year. Be go cops work with resident to identify and creative smart culturally and ethnically congruent safety programs for all seven city voting districts. Your best public relations is good solid police work, keeping all resident of Oxnard equally safe.

Stop hiring your old tired retired cops to write RFP and then these same well-connected retired cops are rewarded with the supervising of state and federally funded programs like CALgrip. These state and federally funded grants are nothing more than slush fund for well connect Oxnard cops, they do nothing for the intended identified at-risk kids or other residents of Oxnard. These programs are a total waste of time and taxpayer money. Instead work closely with CBO in the community that do the good and noble work. Scott we know exactly who this great CBO’s are in the community that are out here doing the transformative work.

Eliminate now the “professional” training of inferior jaded and knuckleheaded cops/interlopers in dubious professional area that these cops neither have the credential, professional training, nor the physiological disposition or makeup to undertake on the incredible demanding and crucial new 21st century safety programs and services in Oxnard. Eliminate the current OPD “service philosophy” department notion that cops can be social worker, counsellor, therapist, recreation teachers. This fickle and thoughtless incursion into vital professional community safety professions by cop we have witnessed are not only problematic, dangerous, but many time a total waste of taxpayer money and deadly.

A community Police Advisory Board must be set up immediately so that all residents of Oxnard can have direct involvement and power in the reform, creation of a community safety model that reflects community aspirations and is directed and supervised by the community. Today, cops must be constantly reminded that they act on the direction and orders of the community and are nothing more than faithfully employed servants of the entire community. The cops must be muzzled and indoctrinated to be the loyal servants, of all of the community and not the attack dogs, or militarized soldiers for the elite of Oxnard.

Finally, I recommended to you some two years ago that there are many professional mental health experts volunteers that are anxious and willing to work with the OPD to develop a mental health first responder protocol/program. These community volunteers/staff would act as trained and professional civilian first responders to certain community safety incident/problems that current national safety model have demonstrated to have the real possibility of eliminate the cops, “shoot first, ask question later” approach to familial, youth violence, homelessness, unique immigrant issues. The new safety models can save lives!  These mental health professionals can work with the myriad of other mental health and community safety  issues and concerns that the cops have absolutely no train, patience or time. These community based safety models with non-police professionals as first responders on the scene can help minimize and avoidable situations where things are going to go dreadful and at time deadly wrong when only police respond.

You’re the right Chief for Oxnard, you can lead the city progressively, compassionate and intelligently through these historically angry, deadly times. We the communities of color, in Oxnard and throughout the nation, will never go back to those, hopeless, powerless and disenfranchised days where cops dictated, ruled and controlled completely the safety agenda at the total exclusion of the communities of color.

Those unjust, unequal and racist American policing day are dead and gone forever Scott. No institutional power not your OPD, The Ventura County DA or the Oxnard City Council can stop this national and local police reform movement that demands equal justice, accountability and community input and a sharing of decision making process. Not one step backward we have waited 245 to 400 plus years for this moment we will win because love and justice is on our side. You are the OPD Police Chief that can d

Ever notice how the leftist viewpoint on this outlet comes almost exclusively from one person?

If anyone wants to know the Left’s position on truth and society’s right to a free exchange of ideas, there’s your answer.

I find it hilarious that the ones protesting this are the gangsters themselves!

No thanks Vasquez, we want the injunction. There is way too much gang activity as it is, can you imagine if it was not implemented?

Mr. Vazquez does not follow local news. At least several times a week, gang members are arrested in Oxnard for weapons violations. The injunction, to some extent at least, helps keeps dangerous individuals who do not abide by the law off the streets. It reduces the change that they will kill one another or decent, law-abiding citizens. Wise up, Mr. Vazquez, and stop harassing the police whose only goal is to make this a safer community. The OPD needs to be tough on crime because of gangs.

This illiterate and inaccurate piece was supposedly written by someone with a master’s degree? Where did he purchase it? Ask for a refund.

Comrade Vazquez, how are you doing? Hope all is well in your surreal world of communist propaganda. What page in the communist manifesto do you acquire your talking points? By the way what have you done recently to decrease gang crime? All of your baseless allegations have no basis in fact or you would gladly post them. Thanks for all the useless hot air your spreading. The Green group will probably start suing you soon for pollution.