By Tim Gruver | The Center Square

(The Center Square) – A Southern Oregon wildfire spanning more than 150,000 acres threatens thousands of homes and the Californian power grid.

The Bootleg Fire was first reported on July 6 and was burning some 38,000 acres on Friday. By Saturday, the fire grew to 76,897 acres, according to INCIWEB. On Monday morning, it swelled to at least 153,535 acres, threatening 1,200 homes in Klamath County. That equates to around 240 square miles or the approximate square mileage of Portland, Eugene and Salem combined.

All residents in the vicinity of the Bootleg Fire were under evacuation orders on Monday. Those orders include Level 1 “Get Ready,” to Level 2 “Get Set” and Level 3 “Go Now.” Over the weekend, the Klamath County Sheriff’s office announced it would make arrests if anyone in the evacuation zones refused to leave the area.

As of Sunday, the following communities in Klamath County were placed under evacuation: 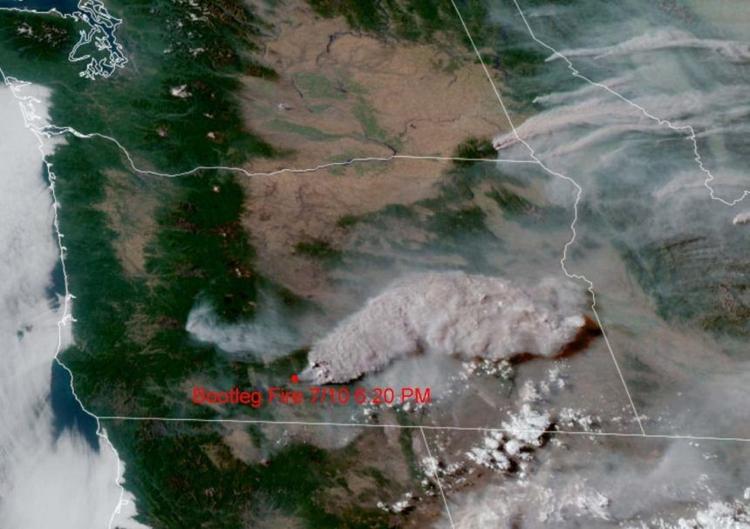 On Sunday, the Oregon State Fire Marshal reported that 1,000 firefighters were being sent to the scene along with 83 fire engines from Lane County and beyond. The Bootleg Fire was 0% contained on Monday morning. Its cause is under investigation.

Fire officials report the thick plumes of smoke from the Bootleg Fire and the Jack Fire in neighboring Douglas County were drifting as far east as Idaho. On Sunday, the Jack Fire had burned more than 10,937 acres west of Tokatee, the Oregon State Fire Marshal Blue Incident Team reported.

As of Monday, The Jack Fire was 10% contained as of Monday, the agency reported. Around 781 people are fighting the Jack Fire in 53 vehicles—four aircraft, five dozers and 44 engines. The fire threatens some 240 structures.

More concerning to Northern Californians is the Bootleg Fire’s proximity to power lines some eight miles away. The prospect of fire-induced mass power outages in the region prompted California’s Independent System Operator to issue energy conservation advisories this week.

Customers are urged to use as little electricity as possible between 4 p.m. and 9 p.m. PST on Monday. The agency recommended households set thermostats to at least 78 degrees Fahrenheit, leaving the lights off and not using major appliances.

Over the weekend, the Bootleg Fire cut power to transmission lines, clogging up energy output up and down the West Coast. As a result, power to the California ISO service territory, which covers about 80% of the state, was cut by as much as 3,500 megawatts.

Tim Gruver is a politics and public policy reporter. He is a University of Washington alum and the recipient of the 2017 Pioneer News Award for Reporting. His work has appeared in Politico, the Kitsap Daily News, and the Northwest Asian Weekly.