Last summer, squatter encampments mushroomed across Oxnard’s Ormond Beach wetlands, increasing public concerns about the water quality in the lagoon–and for good reason.  According to the California Coastal Commission’s Coastal Act Policy 30240 (a), “environmentally sensitive habitat areas shall be protected against any significant disruption of habitat values.”  Many insisted that the city of Oxnard, which holds jurisdiction over Ormond Beach vis-a-vis the Local Coastal Plan (LCP), not only had failed to comply with state policy but also its own city ordinance, OCC 2906 sec, 7-301, that prohibits camping in the wetlands.

Watershed scientist Tevin Schmitt from the Wishtoyo Foundation and its Ventura Coast Keeper Program questioned what impact the human encampments had on the Ormond Beach Lagoon water values. In July, he took several water samples from three areas around the Ormond Beach Lagoon:  Perkins Bridge (GPS coordinates 34.138558, -119.184328), Ormond Lagoon North (GPS coordinates 34.137639, -119.183320) and Ormond Beach South (GPS coordinates 34.135369, -119.182579). Schmitt tested the samples for the presence of the E. coli bacteria and for the enterococcus bacteria.  The results validated what many intuited: both bacteria were present in mass quantity. In fact, according to Schmitt, “Results from July had each sample with >24,196 CFU/100mL.” CFU stands for Colony Forming Units and is the metric used to measure water quality.  Schmitt explained that 24,196 CFU/100 mL is the maximum count for the particular test method he used and the bacteria count for all three areas that he sampled exceeded that number.  He concluded that the most likely source of the bacteria was human, and the culprit, the squatters living in the area.

In November, Schmitt repeated his tests and sampled the water from the same three areas again. The results were promising–he found that E. coli numbers, while still somewhat high, had significantly improved from July.  Most noteworthy are the water samples taken from Ormond Lagoon South, the area located closest to the squatter community. The E. coli samples averaged 1308.45 CPU/mL and the enterococcus samples averaged 3.05–a vast improvement from the July count of >24,196 CFU/100mL. Schmitt agrees that the aggressive campaign in September by both the Oxnard Police Department and the Port Hueneme Police Department to remove the squatters from the public areas in Ormond Beach helped significantly to improve the water quality in the lagoon. Future testing events will have to wait until after the wet season when results will not be skewed by bacteria introduced from run-off from other sources, such as the  tšumaš Creek.

While the Ormond Lagoon appears to be recovering, human contact with the water should still be avoided.  Schmitt reports that the November samples revealed that for water quality limits for recreation “all E. coli samples exceeded limits for Water Contact Recreation (REC-1: 235 CFU/100mL) and all but two samples taken from Perkins Bridge exceeded Limited Contact Recreation limits (LREC-1: 576 CFU/100mL). No Enterococcus samples exceeded recreation limits.”

Moreover, bacteria in the Ormond Lagoon continues to pose a threat to the endangered species that depend on the lagoon for their food and habitat.  Sludge from human waste not only introduces the E. coli bacteria into the water but also nutrients that disrupt the delicate ecosystem of the lagoon and may cause eutrophication, resulting in oxygen-deprived “dead zones.” The endangered Tidewater Goby that lives in the lagoon is exposed to these bacteria and nutrients and then predators such as terns, cormorants and diving ducks, ingest their prey along with all the bacteria and nutrients.  Additionally, the lagoon is habitat to the threatened California Least Tern, which forages for fish in the waters of the lagoon, full of high levels of human bacteria.

Schmitt’s data strongly suggests that the public pressure put on the city of Oxnard over the summer worked.  However, the public must continue to closely watch Oxnard, especially next spring, when the weather warms and brings more hospitable conditions for squatters seeking areas for their encampments.  Oxnard Police Department and city officials must do all it can to secure the Ormond Lagoon area prior to March 1. Nesting season for the western snowy plover “officially” starts on March 15th, but because it takes the birds a couple weeks before nesting to establish their breeding territories and perform courtship, human activity is restricted as of March 1st.  More can be done between now and March 1st to make the wetlands more optically appealing. Ventura Audubon Society President Cynthia Hartley agrees that after years of weather and vandalism the dilapidated habitat fencing is an eye-sore and no longer protects nesting areas.  In particular it is regrettable that the squatters removed fencing purchased for the purpose of keeping humans out of snowy plover nesting habitat and instead repurposed it in their own encampments.  This winter Ventura Audubon is removing the old fencing, raising funds to replace the materials and seeking volunteers to help install new fencing before nesting season starts in March. The Ormond Beach wetlands is considered the jewel of the Ventura Coast and should look like one.  What a difference new fencing and additional signage could make in signaling to visitors that this place is indeed beautiful and worthy of being admired and protected.

Should Oxnard maintain its commitment to enforce city ordinance 2906 and to comply with Coastal Act Policy 30240 (a), then perhaps the water samples that Tevin Schmitt takes a year from now will show that the concentrations of the E. coli and enterococcus bacteria were greatly reduced in the Ormond Beach Lagoon. 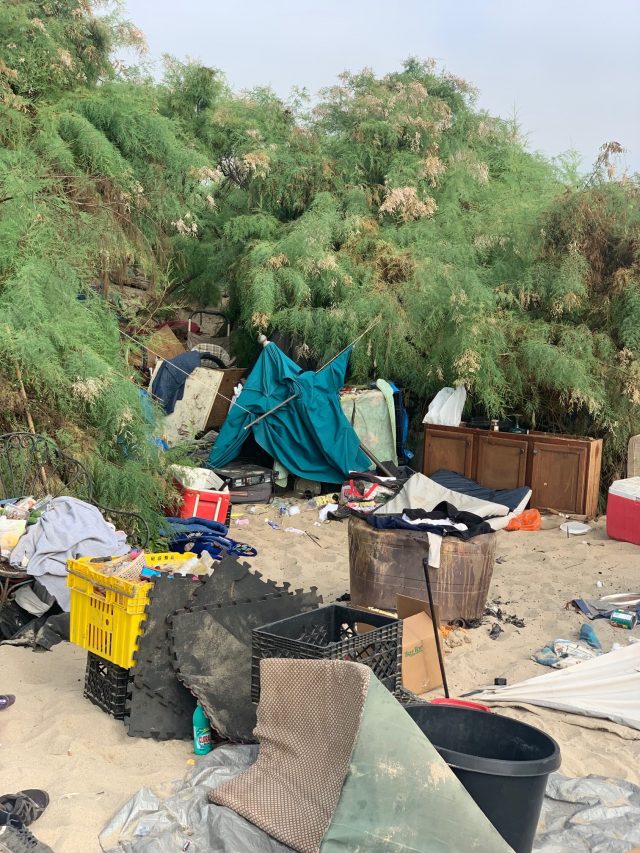 The Wishtoyo Foundation and its Ventura Coast Keeper Program is a non-profit organization and is committed to using the scientific method to educate the community.  Opinions expressed in this article belong exclusively to the author.

Christina Zubko is a reporter for Hueneme Voice