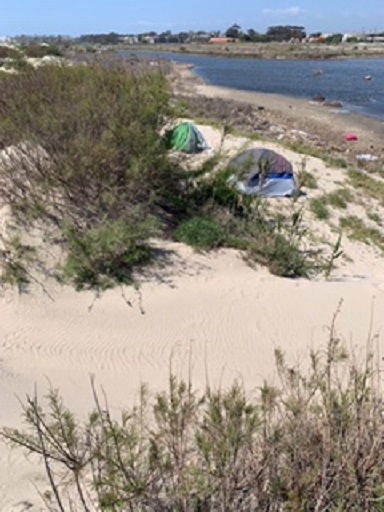 Very well said mike as a person that has a heart for all humans iv visited the helico properity on ocasion i watched it grow from 18 incampments to over 300 incampments i questioned why did our law in forcment and city Council let it grow so big.i was told by a tenate of halico that they have been servied notice to get off the properity .at this time i voice my opion on next door of witch i warned that an evition of this size would put the older folks in danger so they extened the date by two weeks and i was told that the city had an a emergancy meeting and had decided to take $400,000 of emergentcy funds to help these homless people then we had the wild fires and the move out date was again extened.after the fires were over about a month or so later law inforcement show up and force them all to leave.the beaches the parks some gated commuitys were being invaded with these homless because they had no where to go they were sleeping on the sides of private homes and all the commuity was put at risk of possible danger.and when a question about the money was brought up i was told that it went to the clean up of halico.when at fitst it was to be used to help relocate or get help for these homless people.i tried to stop this from happening people got held up on the bike path assalted at the park meranda and bubbleing springs some of the homeless were subject to harassment by our law inforcement and chase into other citys and remain.the santa clara and ventura rivers became safe havens for the homless.these people are human beings and treated like animals.if the money was there to help them then why treat them this way.the homeless incampments now are few now some are waiting to go into houseing but theres no where to put them the vegibon hotel is full other houseing is not availble to them and just this moring i got a phone call from a scared older lady that she was scared of being thrown out because of drones flying over them with a message to vacate the property.is this a scare tatic if lt is ask the people that filled up the houseing ment for homless why they couldent place them?because the women that called me and her friend had contacted some one that places them to be told there is nowhere to put them.and if they did the friend wouldnt be dead today.she was murdered on the april 9th 2020.and herself has no one to protect her .now that the person has been caught sure she feel safe.but when the drones flu over them she feels threaten.she wants off the streets.her health is not good and needs help.and i will keep my promise to not turn my back on her until she does get the help she needs.i take food and supplys to her almost dayly.so please have a heart and leave them alone.the city can help by puting trash dumpsters so they can pick up there trash.i try to bring some out my self.im 61 yrs old and it takes me time to go to the site but i still go out there.there is some there that would help keep that area clean they would stop cutting trees if they had portable stoves showers and fire wood.they are trying to survie.thank you again mike people like us are needed.

I find it kind of funny that you pass such judgement when I’m sure you don’t live there. A lot of homeless people get financial support and still chose to sleep outside because they chose to spend their money on other things! I know that some people are homeless due to losing their jobs and homes and that’s a temporary situation but there’re some that chose not to make a change in their lives. I’m from Santa Barbara and we probably have more homeless than a lot of cities because of our weather. When you’re living in your neighborhood though in Ventura, the house you paid over $600,000 for and you now have homeless people living there, using bushes as their bathrooms across the street, do you honestly feel that’s acceptable? They were shooed away from the beach area because of stabbing a and too many incidents but because of so many houses being built on the east end… they’ve ventured out and crime has increased incredibly. Cars broken into, packages stollen and vandalism. I am not saying to put them somewhere, I just know that some have housing or places to rest their heads and choose not to. Theirs no reason they can’t pick up after themselves when they have trash and act in a appropriate way. Just because you’re living in a tent, doesn’t mean you have to act horribly to other people. The community shouldn’t have to clean up tons of trash on multiple occasions because they can’t make it to a trash can!

To you Godless people. So what soon you too may become homless as they are.I am ashamed of all you as anonomous strangers. How dare you judge the homless as you have. Many of those people have been pushed lead even forced into where they are now. Yes many are addicted many are criminal.many are without hope as well from ever being anything more. And with people such as these haters hendering their survival and any chance at getting any kind of foot hold to rebuilding a life….a life you care nothing about nor do you even know why so many fall victim to this alternative way of living. It breaks my heart that you would so much as help a bird to survive yet not a fellow human soul.let them live let them be. Who the hell are you and were have you misplaced you hearts and minds.at least the homless can survive more then I can say an⅞