Our Ventura TV recently surpassed a million online views, all in addition to multiple millions of television views on Ventura cable channel 6 TV. 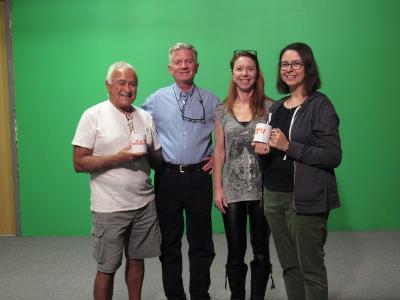 Our Ventura TV is an award-winning weekly talk-show television series broadcast on Ventura cable channel 6 TV and also published on OurVentura.com as well as on social media networks. The programs are primarily about individuals, nonprofits, community advocates, leaders, artists and organizations who contribute in some way to the Ventura County community.

Since the series began in 2008, the theme for the TV series has been “People doing good things in Ventura County” and the surrounding area. The majority of programs are talk shows featuring guests who are interviewed about their community activities. Additionally, there are music and other creative productions.

The series is produced by George Alger and directed by Michelle Hoover. Several of the most active hosts include Sandra Siepak, MB Hanrahan and Monique Nowlin, as well as George Alger. Some of the key crew include Mary Christine Ballestero and Juan Mancera.

As a result of the pandemic the series expanded to integrate video conferencing so that guests can get their message out from their own home or office.

Producer George Alger said: “We’ve been honored to broadcast many individuals and organizations over the years and we wish to include your message, as well.”

If you’d like to be a guest on Our Ventura TV, just visit OurVentura.com and click “Contact” to get scheduled. There’s no cost for non-commercial messages.