The City of Oxnard’s September 2021 investment report will be brief this reporting period and is required to be submitted to the City Clerk and the City Council as prescribed in California Government Code 41004.

But first, I wish to give a special thanks to​ Eden Alomeri, Assistant City Treasurer, of the City​,​ and staff without whose assistance this report could not be generated. This report does not show the fund balances, nor disbursements, nor total receipts of the City of Oxnard, because Oxnard Municipal Code identifies the Oxnard Finance Department is charged with producing that information. This report does reflect the monthly investment information in the similar format that has been presented in previous months along with the amounts in the Bank statements as of September ​30, 2021. The following data is included in this report.

Next, we will show you in a bar chart the amounts invested separated by their maturity date or year. This will allow you to see the ladder or spread of the investments in order to generate a higher return. Third, we explain that the cash flows over the last 15 months so you can judge the management of the cash and determine whether there are periods during the year when more money is available for a short period, overnight investments versus 2-, 3-, 4-, or 5-year maturities. Fourth, we will show you the daily cash position for September 30, 2021 so that you can see how the Treasurer’s department reviews our cash balances every day to assure that the city has enough liquidity to cover its obligations.

And next, we attached the detailed list of every investment that the city currently holds as of the last day of September 30, 2021.

This information is being provided to you using both charts and graphs. The charts are presented so that the Mayor, Council and the public can begin to ​see the actual amounts in the city’s ​ bank ​accounts​ at Bank of America​. The graphs are created in order to show trends, and relationships that are best understood in that method of presentation. So, while this report is brief in the number of pages, we hope to respond to any question you may have.

The City’s total amount invested as of September 30, 2021 at market value was $273,293,570     purchased at a cost of $274,400,981.90. Because of the fluctuation in the market rates yield on new instruments going up and down, the City’s current investments have a lesser value than they cost, resulting in a net market loss of $1,107,411.90 if we had to sell them in the market one month ago. Everything else being equal this means the instruments purchased when rates were going down are now marketed below their cost thus producing the calculated potential loss.

Cash balances on the 30th day of September 2021 in each authorized city bank account with Bank of America total $61,475,474.66 in the accounts shown below.

The investments have a par value of $274,209,000 with a current market value of $273,293,570 were purchased months or years ago. To provide greater return we can try to reduce the amount in LAIF and spread that over the 2,3,4, and 5- year terms. Recently, LAIF was generating an average return that is moving further from the City’s ​average portfolio return. ​LAIF’s September average apportionment rate was .20%, which is less than the current GSE (government sponsored enterprises) rates. Reducing the amount in LAIF would, however, reduce the liquidity of the portfolio.

So now the cost of the investments, the face value, and the market value as of September 30, 2021 and the prior 2 months is provided so at a glance you can see the summary of the entire portfolio, the risk, and the earnings with the current yield on a 365-day basis of .535% year to date. We believe monthly rates for GSEs have begun the long-waited upswing. (?)

Now when we look back at the monthly cash flows of the recent years, we found that the month with the highest cash outflow was September 2018 with an outflow of $37.4 million. And the fact that we had $75 million invested in LAIF, which can be drawn down within one day, means there should be no normal condition that would require the Treasurer to sell investments before their maturity. Before we reveal the details, we want to know the level of efficiency in our investment team. But first we look to see how much cash is available, how much cash is invested to determine the efficiency of the team. The goal is to invest 100% of available cash, and we know that for normal operations we should retain a daily balance of $3-5 million in the bank accounts.

The daily cash report for the last working day in September shows sufficient available cash to satisfy the city’s booked short-term obligations though somewhat reduced from prior months.

So, when we look at the detail, we see that the city is investing as a percent of total available cash. Bank of America provides a return of .19%. Thus, our efficiency rating is now 82% down from 93% in a prior month.

The bar chart below, shows the maturities of City’s investment portfolio and reflects the fact that as our older instruments are being called early, we find the need to acquire shorter term notes unless we can guarantee a rate of .19 % or higher as explained above. Starting in September and concluding in September we have invested all the ARPA money in s-t (less than 15 months) instruments where some we invested at the market rates below .19%. 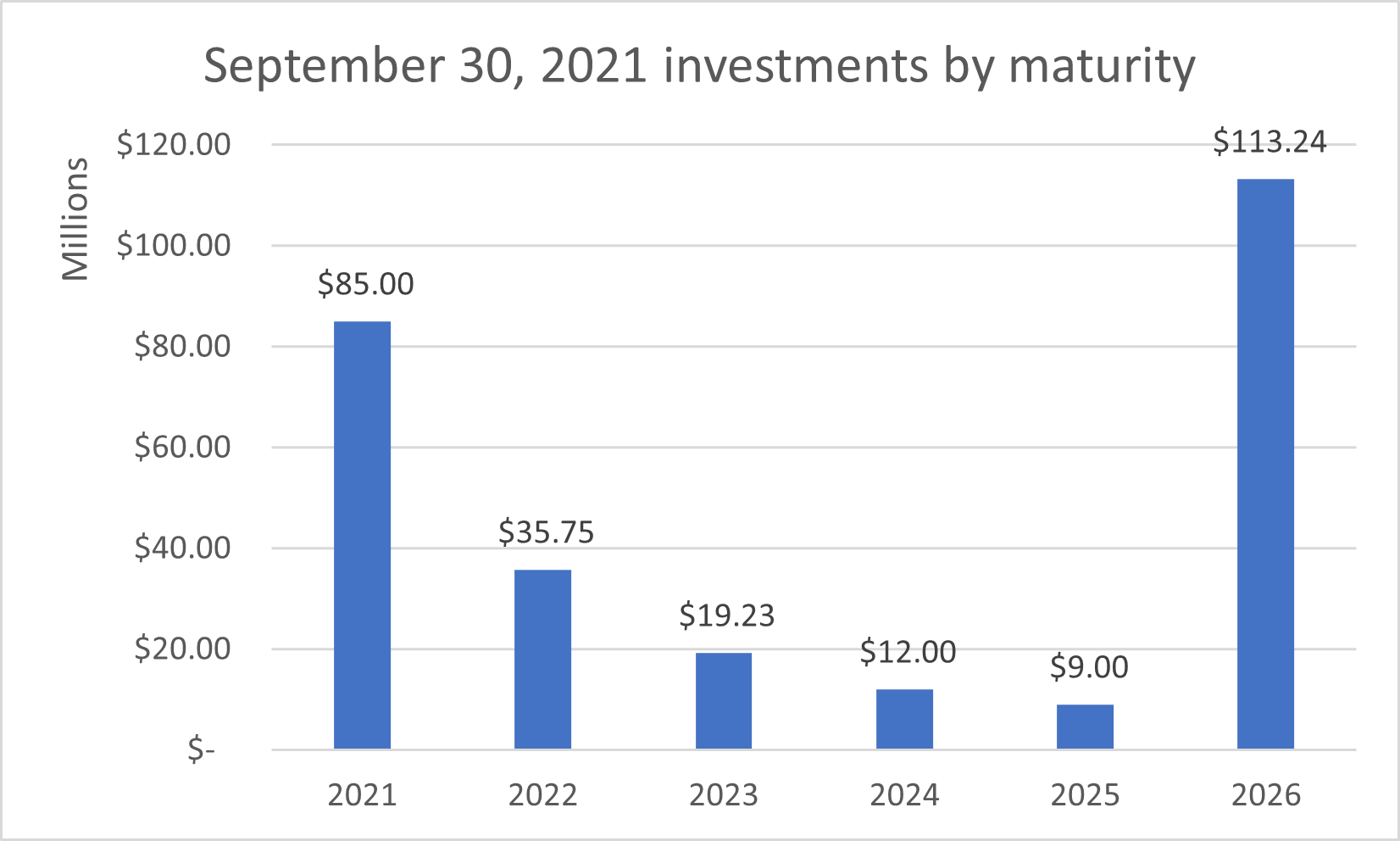