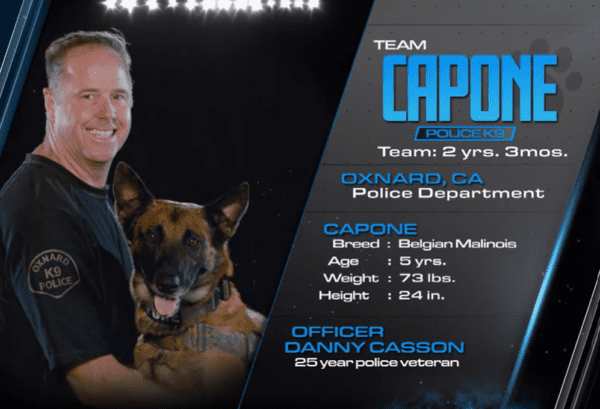 The first event was a course with 6 obstacles. These included the high jump, zig zag, fire escape, palisade where the dogs had to pull on a toggle to raise a 120 lb. door, walk the plank, splash down, swim across a pool and toggle pull to end the time.

In the first heat a Pitbull named Creasy breezed through the obstacles for the fastest time on the show. The underdog heat was taken by a Border Collie named Mack. Capone had some difficulty with the Splash down and finished 26 seconds slower than the challenger, Quelle. It was judged that during the heat, the handler Madison Sperry touched one of the buttons instead of the dog and they were disqualified. This allowed Capone to advance to the Doghouse.

Capone is a 5-year-old Belgian Malinois. He weighs 73 lbs. and is 24 inches high. Officer Casson and Capone have been a team for 2 years and 3 months.

During the final heat, the obstacles changed in the Doghouse. The event started with the team repelling 20 feet to the ground. The door break that leads to the scenting room. In the scenting room 2 keys must be found by the dogs. Next, divide and conquer had the dog climb a spiral staircase and the handler climb a ladder to the next level. The low crawl led to the spider web with 1000 ft of tangled cord. The next step was a double locked door which the two keys from the scent room open. Through the door the dogs must take down a man in a padded suit and release to the pad where time ends.

Mack was the first one through the course. His handler had some difficulty with the repel but the Border Collie picked up after they recovered. In the scent room Mack could not find the keys but had minimal trouble up the stairs. When they got to the locked door the handler had dropped one of the keys and Mack had to go back and get it. They finished with a time of 4:04

Creasy and his handler had no trouble with the repel but slowed in the scent room. They breezed through the other obstacles and finished with a time of 2:09

Capone and Officer Casson flew down the repel. Casson would stop Capone momentarily during the heat with French commands. Once the door was breached Capone flew in on command and found the keys swiftly. The remainder of the obstacles were no trouble and the team finished with a time of 2:02.

Capone and Officer Danny Casson won this episode of Top Dog honors. They received a $10,000 prize and $5000 will go to the Oxnard Community K9 Foundation which was their chosen charity.

Officer Casson claimed he would retire if they won America’s Top Dog competition, but he and Capone are not done yet. They will return to the grand finale to get a chance to be crowned America’s Top Dog.

I’ve watched this in the past but, unfortunately, missed this one. What a challenge to match man with dog in competition with other teams.

I’m very proud of all the people involved.