Where people choose to live, work, and grow their families is one of the most important decisions they will make in life. Climate, cost of living, economic opportunities, or proximity to family, friends, or desirable amenities may all be factors that people consider when deciding where to live. But one factor that is often overlooked is environmental health, and in that realm, air quality is one of the most important considerations.

Air quality matters because pollution is associated with a number of health issues. High concentrations of pollutants can affect children’s development, cause or worsen respiratory problems like asthma or emphysema, and put people at heightened risk of severe health events like heart attack or stroke. And while like many health issues, air pollution has been shown to disproportionately impact low-income communities, there isn’t a meaningful correlation between levels of air pollution and cost of living at the city level. In fact, some of the highest levels of air pollution can be found in the nation’s most expensive and sought-after metropolitan areas.

Air quality has long been a problem in the U.S. For much of the 19th and 20th centuries, the growth of the economy brought heightened levels of air pollution through increased fuel combustion and industrial or chemical processes. More recently, the acceleration of global warming has contributed to drought, wildfires, and other conditions that can raise levels of particulate matter and other pollutants in the air. 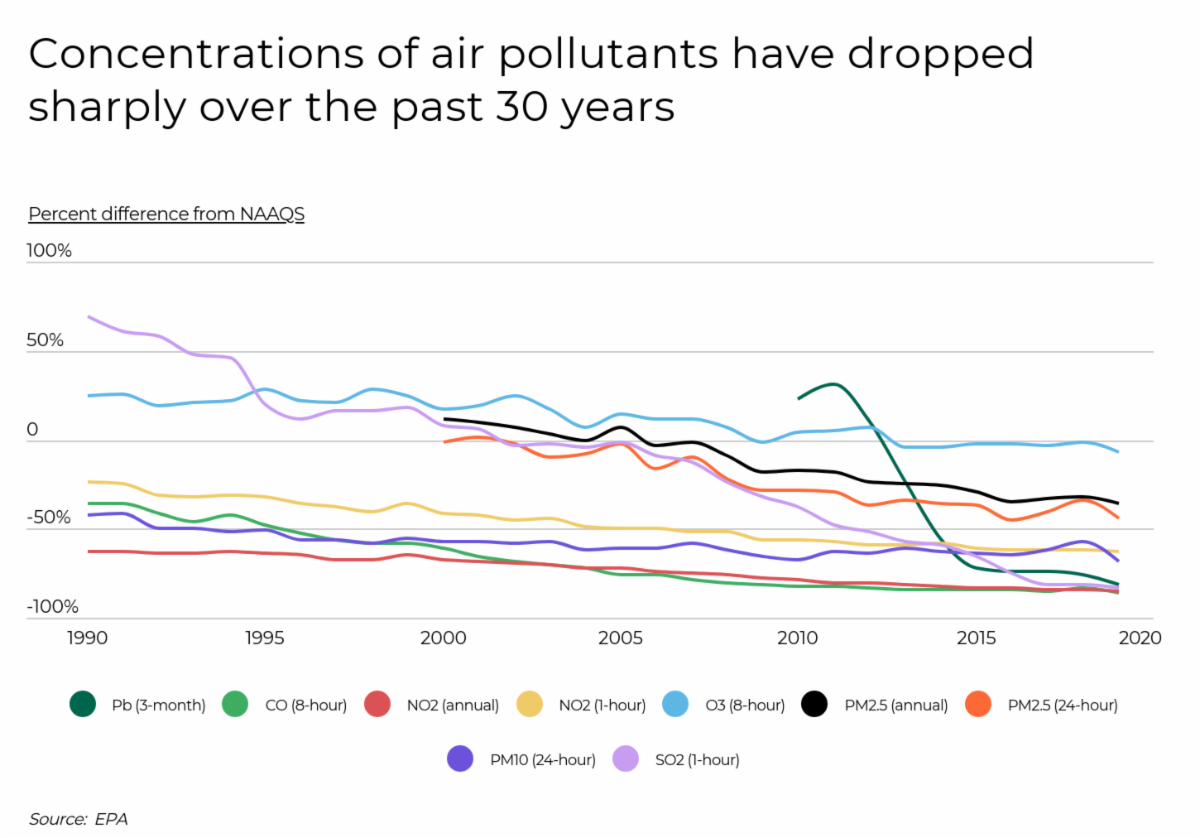 Fortunately, air quality has also been improving over time since the passage of the Clean Air Act and creation of the Environmental Protection Agency several decades ago. Under the Clean Air Act, the EPA is required to set air quality standards (NAAQS) for certain airborne pollutants that have been deemed harmful to human health and/or the environment. To help meet these standards, the EPA can set rules around acceptable levels of pollution from sources like industry or vehicles. Over the years, these policies have had a strong track record, leading to steady decreases across all of the monitored air pollutants. 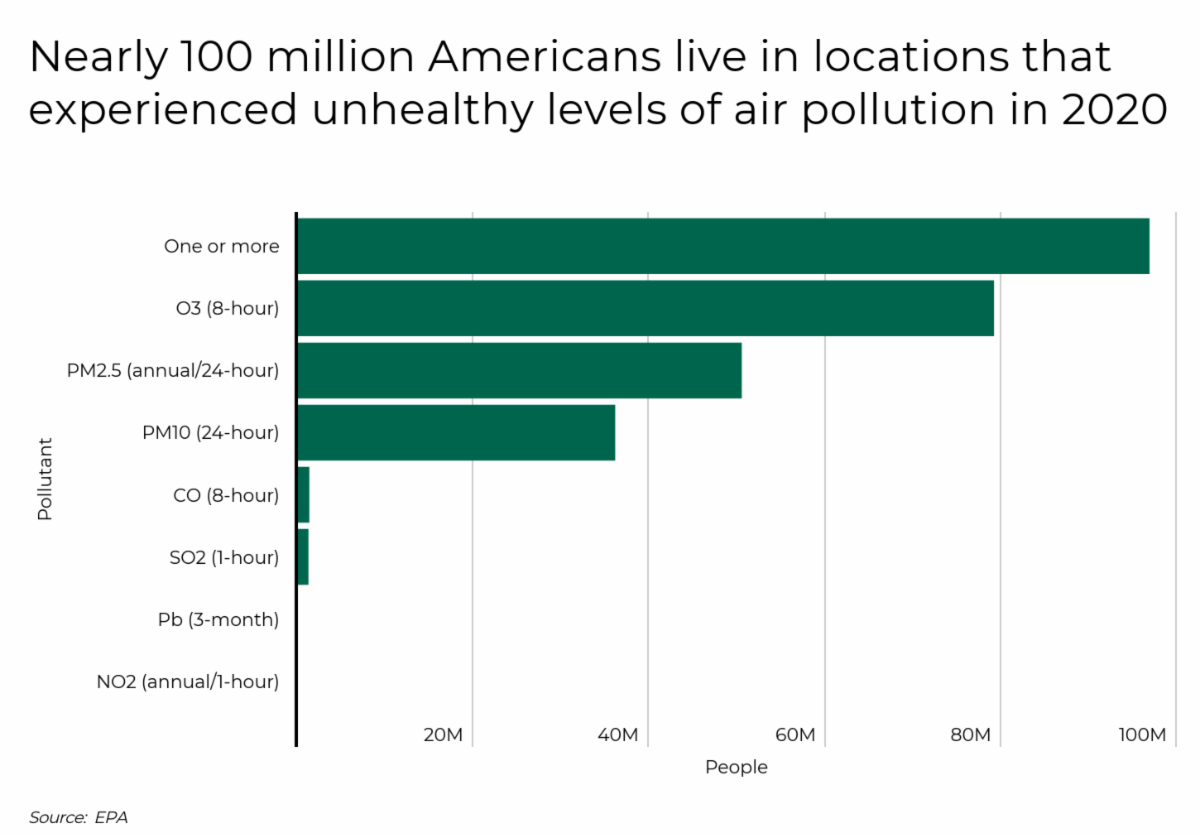 Despite this improvement, air pollution remains a major concern for many parts of the United States. Nearly 100 million Americans—almost one-third—live in a location that experienced unhealthy levels of air pollution in 2020, which the EPA calculates based on whether counties have pollutants at concentrations above the NAAQS. Americans most commonly experience pollution from ozone and particulate matter, but carbon monoxide and sulfur dioxide are also present at elevated levels in some communities. 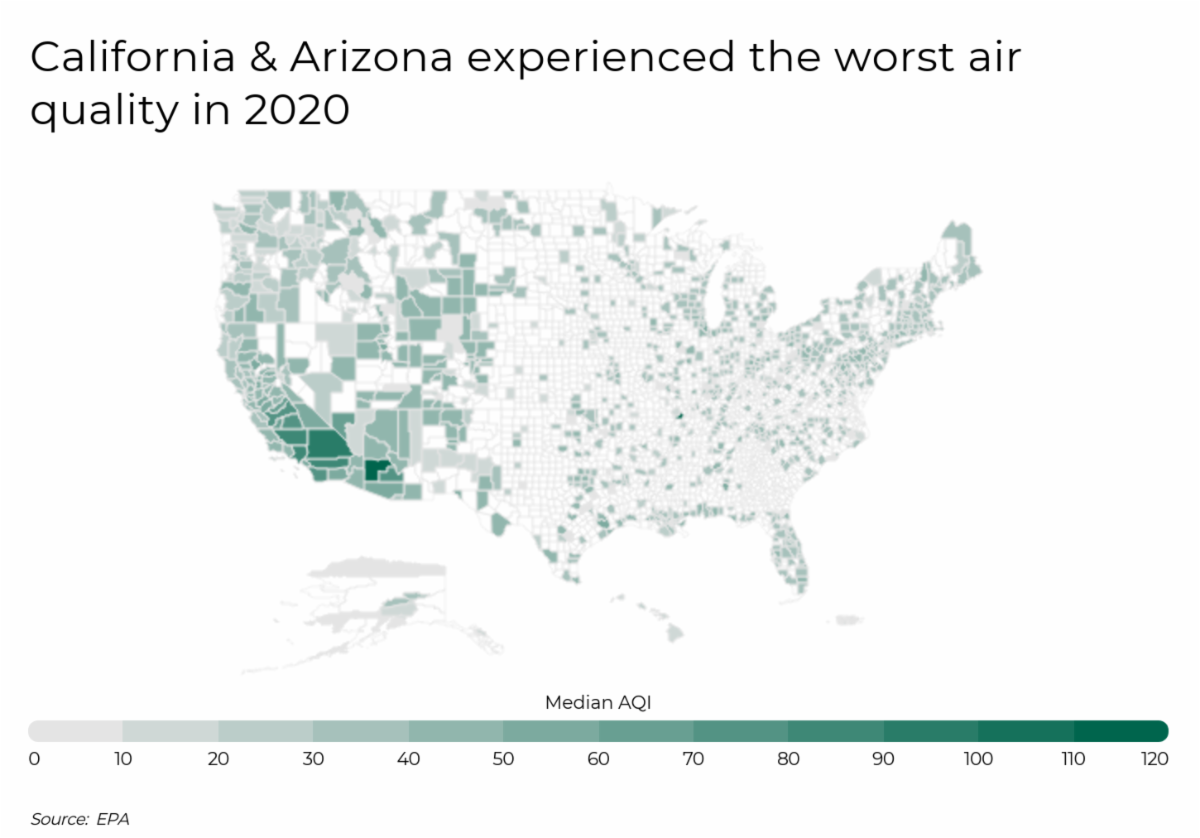 The air quality issue is worse in some parts of the country than in others. Most notably, residents in the Southwest—especially California and Arizona—typically experience the worst air quality in any given year. Much of the reason for this can be attributed to climate and geography. The Southwest is mostly desert or other very dry land with greater susceptibility to dust storms, wildfires, and other events that increase levels of particulate matter in the air. Further, residents of major metros like Los Angeles and Phoenix are more geographically spread out, which increases dependence on cars and with-it pollutants like ozone. Most of the metros where air pollution is highest are unsurprisingly found in California and elsewhere in the Southwest.

The data used in this analysis is from the U.S. Environmental Protection Agency and the U.S. Bureau of Economic Analysis dataset. To identify the most expensive locations with the worst air quality, researchers at Filterbuy looked at the median daily air quality index (AQI) for each metropolitan area in 2020. The AQI is a broad measure of air pollution that takes into account the concentrations of major air pollutants regulated by the Clean Air Act. Higher AQI values correspond to higher levels of air pollution. Only locations with a cost of living greater than the national average, as determined by the Bureau of Economic Analysis, were included in the study.

For more information, a detailed methodology, and complete results, you can find the original report on Filterbuy’s website: https://filterbuy.com/resources/us-cities-with-worst-air-quality/