The Interfaith Council and City of Oxnard put on a special event- Oxnard Together One Community–  to draw attention to the homeless situation and stimulate action- by the public. This was on 1-12-20 at Oxnard’s Plaza Park, a hangout for the homeless. 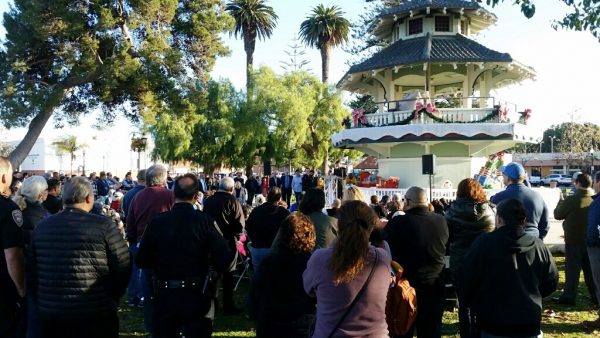 Nine speakers from the faith community and the City spoke, requesting and/or praying for mercy, compassion and ACTION by the public. They stressed that all were asked to help, not just the faith community. The City, including the Police Dept., Housing Dept. and City Manager’s office are all involved. The County Behavioral Health organization was there to explain what they can do and handed out literature.

Various Christian denomination pastors, a Rabbi and a Muslim cleric all agreed on some common points, all agreed to subsume their differences to focus on compassion, love and neighborly help for those so much less fortunate than most of us. Some even quoted remarkably similar scriptures to back it up, originally written in Hebrew and Arabic. This prompted an opening joke by would-be stand-up comedian Rabbi Dov: A priest, a rabbi and a Muslim cleric walked into a bar…. There was no need for him to finish, as the audience laughed, having gotten the point.

Without detailing all nine speeches, here was the gist of the message:

The city and some local houses of worship want the faith community and the public to assist, in addition to state, county and local efforts, which have so far proved inadequate. There is much suffering and you may be able to help alleviate some of it.

Multiple Pastors and the Rabbi referenced the Bible Book of Isiah 58 on treatment of the less fortunate. Mohammad Islam of the Oxnard Islamic Center referred to a Koranic verse which sounded rather similar.

Pastor Lance Ralston of Calvary Chapel Oxnard said someone asked what the greatest of God’s commands was. A response was love the Lord our God. He followed it with love your neighbors, who he defined as anyone in need,

City Manager Alex Nguyen said he is very angry with the state of California for not doing enough for the homeless, which he has made a high priority for Oxnard, with the blessing of the City Council. He stated that Housing Director Emilio Ramirez, who he hired, came along at a good time and has also embraced that priority. Based on our feedback of county news, it seems as though the number of homeless and attendant problems in Oxnard is the highest in the County, followed by Ventura. The number of local homeless has actually been increasing, but an annual homeless census will be taken at month-end.

Ramirez asked for our “love, hearts, ACTION. He said “do what you’re good at, what you love, for those in need.” He said things simple as greeting homeless on the street nicely, maybe buying them a coffee have a disproportionally large positive effect. He said jobs, housing, heart and love are needed,

Police Chief Scott Whitney is on board with the idea of helping the homeless and engaging the public via the faith community and directly.

Speaker Joan was formerly homeless, but the Housing Dept. found a home for her. while members of the local faith community helped furnish the place. She’s even published a book (will try to find info on this).

Something missing from the program were actual projects the public could sign up for right now and get started on. I talked to Adam Lopez, Police Chief Scott Whitney and Rev. Greg Runyon. They all agreed and said that will follow. They did, however, mention general categories, such as finding.making available housing, donating money and stuff, etc. They did the next best thing- passing out solicitation cards for potential helpers to sign up to volunteer. Since most of you reading this weren’t there, I reproduced the card below, in case you want to get involved …..

How YOU can help (this was passed out at the event): 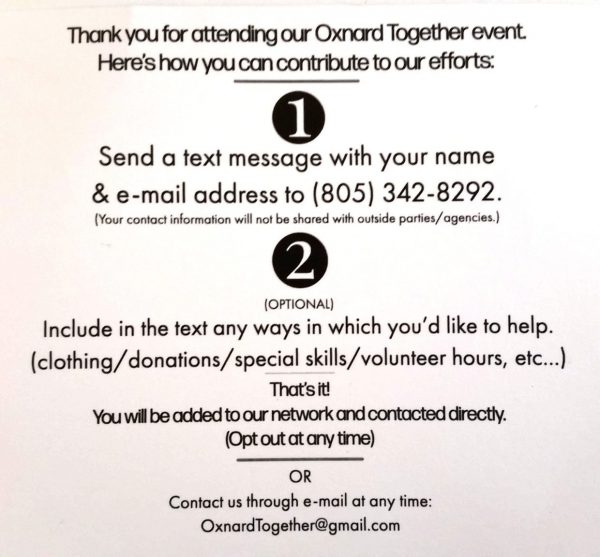 In October, the Interfaith Council and Police Dept staged a work day to do charitable projects. Nearly a thousand people showed up at New Life Church for a briefing then staged to work on nearly 50 pre-organized projects. My wife and I ended up at VC Rescue Mission, to paint fences and reorganize food stores respectively. The people  you see walking around town with the black “One City- One Church Oxnard shirts worked that day. We need more of that.

City and county officials have stressed to me that all behavioral health services are delivered and administered by the county, via county employees or third party subcontractor organizations. The City works to help steer those in need to the services. So called “navigation” services provided by the county ad cities, such as Oxnard (Housing Dept.) can help people get ID, support programs and actual medical treatment, including mental health care. A large percentage of homeless people have mental, emotional, physical and addiction problems needing treatment. Difficult to find a home or job with such problems.

Finally, there are places people can go for programs to rehabilitate themselves and get their lives in order, such as VC Rescue Mission and Casa De Vita, which have outstanding programs and almost immediate openings right now. They stress that guests must first get “clean”off drugs, even if that means a rigorous “detox” regimen at the County Medical Center or other qualified facility first. They cannot handle severely disturbed people. Such situations require County or doctors’ referral to other programs.

Thanks for the comprehensive article George!
Tim

Thanks, Mr. Mayor and thanks for supporting this effort. Saw you shaking hands and kissing babies while in short sleeves in the chilly air on Sunday!