The year 2020 was unlike all others in our lifetimes, presenting a series of challenges to not only our nation, but the entire world.  In spite of these challenges, Oxnard continued to show its community resiliency as it moved into early 2021.  Reported crime in Oxnard for the year 2020 held relatively flat in comparison to 2019, having an overall increase of 1.83%.

Contained within this news release are the Uniform Crime Reporting (UCR) statistics for 2020. The UCR program, managed by the US Department of Justice, collects crime statistics from 17,000 law enforcement agencies throughout the country. The Oxnard Police Department has been tracking its UCR statistics for the past five decades. The statistics are classified into eight (8) “Part One” crimes and are broken into two categories: violent crime, and property crime.

Below is the chart containing UCR from 2020: 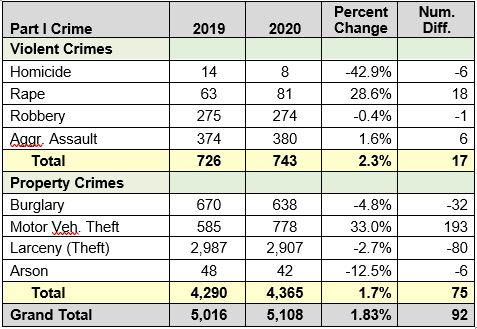 As noted in the chart, the City of Oxnard reported an overall 1.83% increase in crime for 2020.  Ninety-two (92) more crimes were reported in 2020 than in the previous year.  Overall violent crime increased by 2.3%, and overall property crime increased by 1.7%.

Violent crime also had a reduction in robberies (-0.4%), with increases in rapes (+28.6%) and aggravated assaults (+1.6%). As documented within this news release, reported domestic violence-related crimes decreased, yet reported sexual assault-related crimes increased. Regarding the increase in sexual-related crimes, it is generally believed that potential victims were likely at home longer with their abusers because of the COVID-19 pandemic. The closure of businesses and schools provided more opportunities for abusers to commit offenses and less opportunities for victims to report such crimes.  Though domestic violence offenses do not have their own UCR category, we have included Oxnard’s statistics:

Property crime in Oxnard had reductions in burglary (-4.8%), larceny (commonly referred to as theft) (-2.7%), and arson (-12.5%). The single property crime category increase was motor vehicle theft (+33%), with 193 more vehicles stolen in 2020 than the previous year.  Approximately one-third of the vehicles stolen in Oxnard last year were 1990’s Honda models.  About one-fifth of motor vehicle thefts were preventable, such as keys left in the vehicle or the vehicle left running and unattended.  A contributing factor to the rise in motor vehicle theft is believed to be related to the emergency zero bail decision during the middle months of 2020.  The non-incarceration of persons who committed motor vehicle theft contributed to a surge in this crime type, as there were a significant number of repeat offenders.

This year, the Oxnard Police Department will begin reporting crime statistics through a new mandated system, the National Incident-Based Reporting System (NIBRS).  NIBRS is viewed as a more comprehensive reporting system, as it collects and presents data from more than 50 offense classifications, versus UCR’s eight (8).  Future year-end news releases for crime statistics will contain data from NIBRS.

The impacts of the COVID-19 pandemic forced virtually every household, business, and organization to make changes and adapt.  Law enforcement found itself challenged from many angles.  Just some of the challenges of 2020 included: health concerns, workforce and operational adjustments, socially distanced policing, the California Judicial Council’s imposed emergency “zero bail” order; reduced jail capacity, social unrest, and a call for nationwide police reform.   However, Oxnard was fortunate, as it was quick to adapt and withstand the challenges.

Through what had been dealt to Oxnard, I would like to commend the Oxnard Police Department employees on their response and dedication to the City of Oxnard during a difficult year.  I would also like to thank our community for sticking together, working alongside us, and standing by us through last year’s challenges. I believe that because of the strong relationship between our department and the community, we did not experience the turmoil that many other cities in our nation faced. 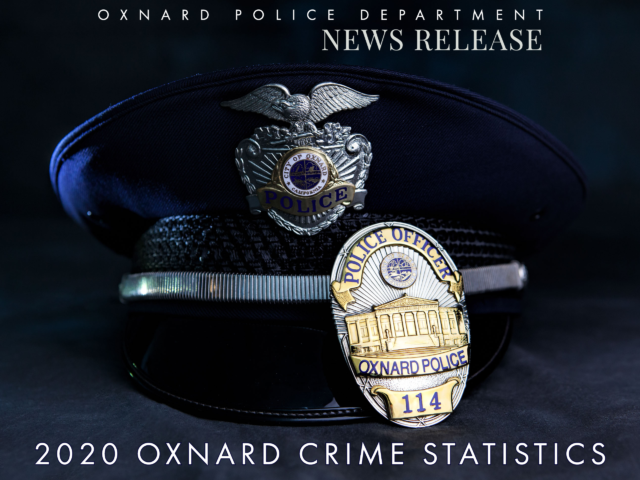