The Department of Justice’s Uniformed Crime Reporting (“UCR”) Program collects crime statistics from 17,000 law enforcement agencies throughout the country. The Oxnard Police Department has been tracking its UCR statistics for nearly 50 years. The statistics are classified into eight “Part One” crimes, which are broken into two categories – violent crime and property crime.  Here are the statistics from 2019, with a comparison to 2018: 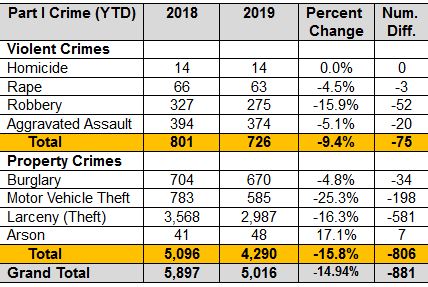 There were 14 homicides in Oxnard in 2019, equal to 2018.  Detectives cleared eight of 2019’s homicide cases with arrests, with an additional seven cases from previous years. When combined, more homicide cases were cleared than occurred, creating a clearance rate of 107% in 2019.  A more detailed explanation is listed in the attachment of this news release.

Oxnard’s 9.4% violent crime decrease was largely due to the reduction of robberies, having 52 less than the previous year. Through crime analysis staff and careful review of data, the department’s investigative and field units worked together to aggressively address robbery crime trends, as well as investigate those persons who were known to commit multiple robberies.

Property crimes were reduced by an overall 15.8%. The largest property crime category decrease was motor vehicle theft at 25.3%, followed by larceny, at 16.3%. The Oxnard Police Department continued to focus on property crime prevention efforts, and believes that this effort significantly contributed to the decrease.

Police Chief Scott Whitney said, “We work very hard to reduce crime and make our city safer.  We’re focused and smart in our efforts. We focus on violent offenders and frequent offenders. We respond quickly to crime trends and we rely on the trust and respect we have established within our neighborhoods to work closely with our residents.”