Pastor Jack Hibbs: “Why have the pulpits surrendered? Open up your churches: This is the hour of great testing”

CHINO HILLS—Calvary Chino Hills Pastor Jack Hibbs opened up the “Come Back California” day-long internet video conference seen by more than 30,000 with prayer and then ended the meeting with a question and an exhortation to pastors: “Why have the pulpits surrendered? Open up your churches: This is the hour of great testing.

“Can we (pastors) not see this is the hour of great testing. We are the church of God, yet we are told by Gov. Newsom we’re not essential. I speak to the pastors of the State of California: Shake off the intimidation of your community. You must lead your people. The state does not have the authority to close the doors of the church.

People are dying. People are sick at home. We’re the church of the living God. We’re hiding in a hole of the enemy. We’re terrified. The church in California has so fallen from its lofty place that few would recognize who she is? We need to preach fearlessly. Do you know that the survival rate of COVID is better than the common flu?

“Open up your churches: All of you: All the pulpits. What would happen if God’s men would rise to obey God and not man? To preach life?

“This is a time of prayer and of studying Ezra and Nehemiah (two books of the Bible) about re-opening.”

Pastor Jack Hibbs said he had a simple litmus test that helped him with voting for a candidate as he responded earlier in his message to the eight other speakers who spoke at “Come Back California”:

Pastor Hibbs referred to the question given at the conclusion of the Constitutional Convention of 1787 to Benjamin Franklin by Philadelphia socialite Elizabeth Willing Powel: “What have we got, a republic or a monarchy?” Franklin’s response: “A republic, if you can keep it.”

“The gift of the republic” is in danger in California, said Pastor Hibbs because of the state’s super-majority. It is a “California citizen’s responsibility to defend this republic by knowing the issues, taking a stand, knowing where we’re going?” 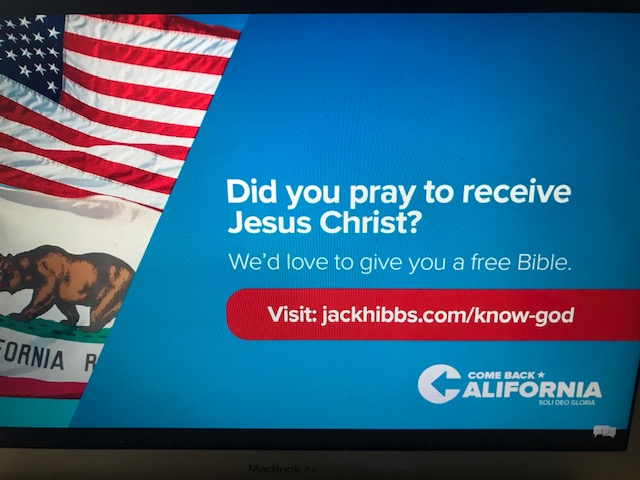 These are the most important issues for most Christians: Life, Marriage, Israel.

I’m cocerned his litmus test has only 3 questions. “Christians” seem to have tunnel vision.