BIDEN IS A SUICIDE BOMBER. Here Is Exactly How He Is Taking Down The USA

Pastor Rob McCoy: “We have the right to peaceably assemble; Facebook now doing the bidding of government”

Pastor McCoy said the actions of Facebook to remove protest messages “is another violation of First Amendment Rights in the State dominated social media world.”  He said the result is his willingness to promote Reopen California events on his “Fireside Chat.”

Three upcoming events focused on reopening the economy—planned by different organizers include the following:

Politico, a liberal media platform, reported April 20th that Facebook has already removed protest messages in California, Nebraska, and New Jersey on the social network from being used  by anti-quarantine protesters for organizing in-person gatherings that violate States’ stay-at-home orders.

“We reached out to State officials to understand the scope of their orders, not about removing specific protests on Facebook,” a company spokesperson said. “We remove the posts when gatherings do not follow the health parameters established by the government and are therefore unlawful.”

“Why is @Facebook colluding with state governments to quash peoples free speech?” tweeted DonaldTrump Jr., who has joined other supporters of the president in accusing Silicon Valley social media companies of suppressing conservative messaging.

“Regardless of what you think about the lockdowns or the protests against them, this is a chilling & disturbing government directed shutdown of peoples 1st Amendment rights. Very dangerous!”

“I see a rise of anti-globalism and see disgust with the elite ruling the many,” said Pastor McCoy.  “This is a clash of ideology.   You either embrace globalism or focus on the individual sovereignty of each person created in the image of God.  This is a battle.”

The State has “declared the church non-essential. Abortion is essential but the church is not.  When do we rise up and defend that liberty.  When do you speak the truth that will set the captives free? 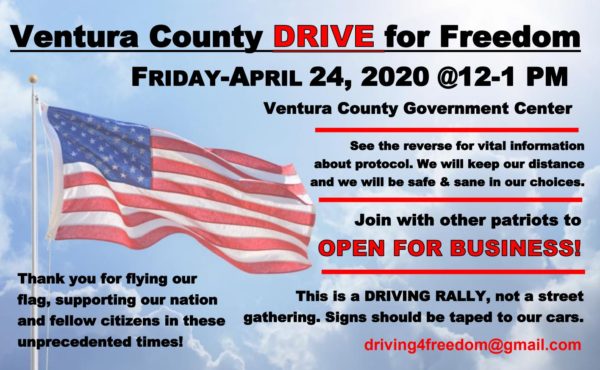 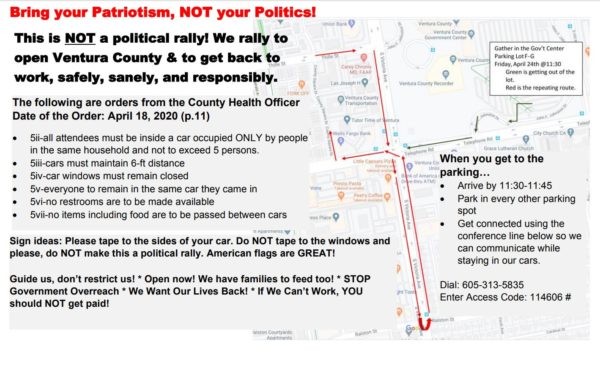 and then link to:  https://www.youtube.com/watch?v=vIAfsn75DMM.)

Let’s do April 24 and May 1 rallies. Repetition helps get across that we are serious.

Where was Facebook when ANTIFA did their illegal attacks on peaceful demonstrators?

It would be my opinion that the May 1st rally would have the highest impact in Ventura County. There may actually be people to see it that are elected officials here.

BIDEN IS A SUICIDE BOMBER. Here Is Exactly How He Is Taking Down The USA