Bakersfield – Nurses, teachers, labor leaders, elected officials and concerned residents held a news conference at the Kern County Administrative Building in Bakersfield today at noon to release a report revealing extensive use in Kern and Ventura Counties of 13 pesticides linked to childhood cancers. The group, organized by the Center on Race, Poverty & the Environment (CRPE) and the Ventura County-Coalition Advocating for Pesticide Safety (VC-CAPS), called on state and local governments to restrict the use of these pesticides, and web-post warnings before they and other hazardous pesticides are used.

The report reveals regular use in the Kern-Ventura area of 11 out of 13 pesticides identified in two recent studies by UCLA as being linked to early childhood cancers. The UCLA studies found that these pesticides increase risk of a child developing specific forms of cancers ranging from 1.60 times (or 60% increased chance) to 3.38 times (or 238% elevated risk), if their mothers lived within 2.5 miles of the pesticide application while pregnant. More than 28 countries have banned or not approved 10 of the 13 pesticides.

The scientific links to childhood cancer and pesticide exposure have been mounting for decades. What is new about these recent studies is that they are California-specific, provide correlations of individual pesticides to specific childhood cancer sub-types, and establish links to in utero exposure over a long distance – up to 2.5 miles from the pregnant mother’s residence.

Current state regulations do not address exposure from applications at such distances and therefore do not account for normal pesticide drift. For example, a policy implemented in 2018 that restricts pesticide use around California public schools and daycares applies only to pesticides used within a ¼ mile of schools.

At the event, the group released a report on use of the 13 pesticides linked to childhood cancers in these studies in the Kern-Ventura region, entitled “There’s something in the air, and it causes childhood cancer.” According to the report, while average annual acreage treated with any of the 13-childhood cancer-linked pesticides has slightly decreased in Kern and Ventura Counties in the years since the period covered by the UCLA studies, use remains very high, and use of two of the pesticides is actually increasing.

Use of pesticides linked to childhood cancers disproportionately impacts Latinx areas of the region that includes Kern and Ventura Counties. Kern County is one of 11 in California with a majority Latinx population (54%) and had more than 20 times the amount of pesticides linked to childhood cancer applied per person than the average of the 25 counties with the Latinx percentages under 24%. In Ventura County the rate of Toxic 13 pesticides was more than 2½ times higher in the 78% Latinx regions of Oxnard than in the rest of the county that is 25% Latinx.

“Fair treatment? It is not fair treatment when childhood cancer-causing pesticides—pesticides banned in dozens of other countries–are used primarily in Latinx communities,” said VC-CAPS organizer Teresa Gomez, referring to the statement on DPR’s website: “Fair treatment means that no one group of people, including racial, ethnic, or socioeconomic groups, should be disproportionately impacted by pesticides.”

In light of the report’s findings, the group called for greater protections and transparency for Kern and Ventura County residents, including public web-posting of upcoming pesticide applications, increased restrictions on pesticides linked to childhood cancers, and 2.5-mile buffer zones around schools, hospitals, and other sensitive sites, reflecting the distances pesticides are known to drift.

The advocates cited reform proposals at the federal level and in Europe as examples of health-protective frameworks that California could adopt. The proposed federal bill “Protect America’s Children from Toxic Pesticides Act” would end indefinite delays in pesticide review, require emergency review of pesticides banned in other nations, end abuse of emergency exemptions, cancel use of organophosphates, neonicotinoids and paraquat, and end state preemption of local pesticide ordinances.

The “Farm to Fork” strategy proposed by the European Union would reduce overall pesticide use and hazardous pesticide use by 50% by 2030 and require 25% of agricultural land be organic by 2030.

“The State and our Ag Commissioners haven’t made the necessary regulations to protect our children from cancer-causing pesticides,” said Byanka Santoyo, an organizer with CRPE. “It’s long past time; we can’t let another generation get harmed by these pesticides.” 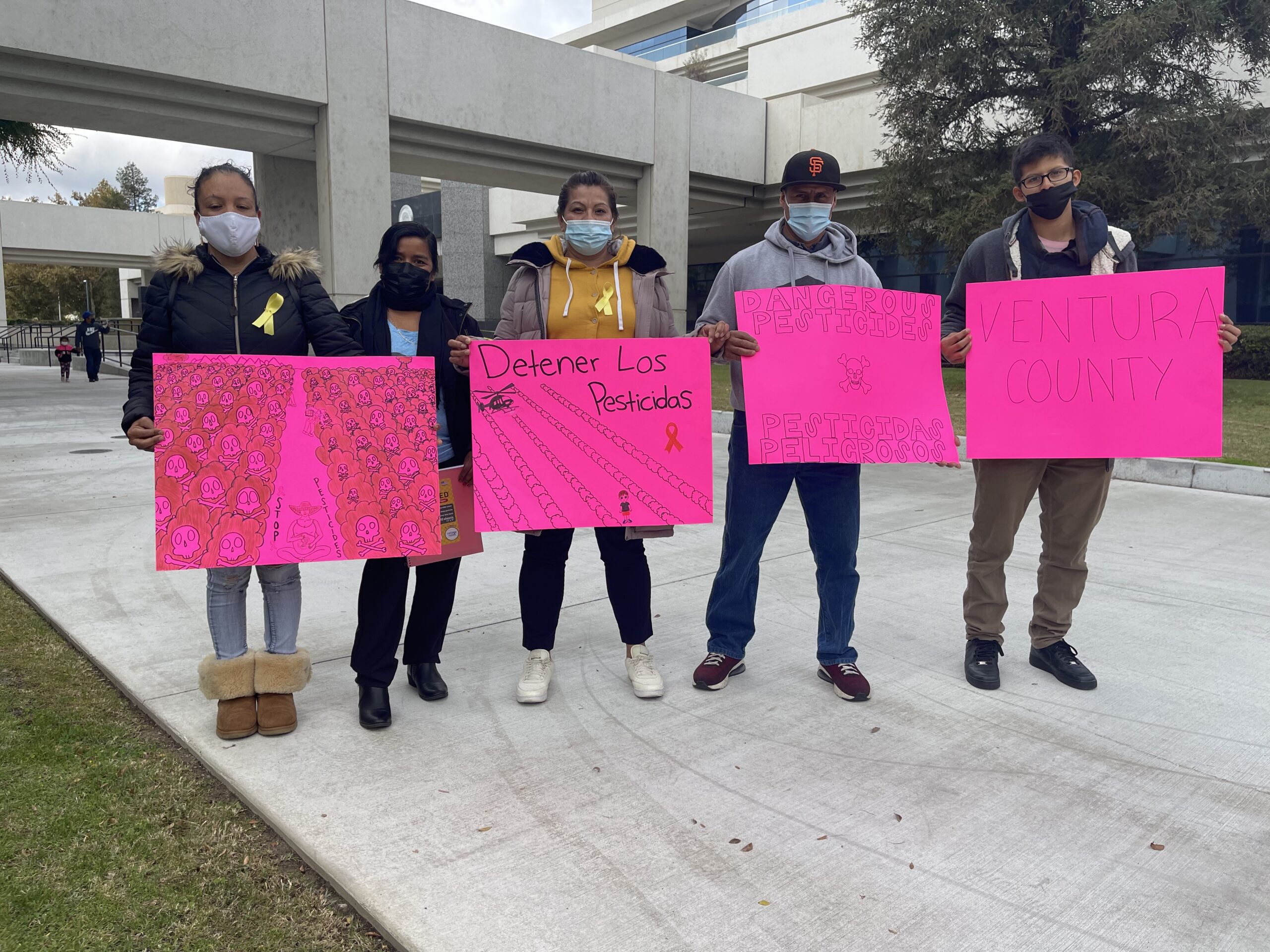 Ventura County-Coalition Advocating for Pesticide Safety (VC-CAPS) is a local coalition of residents, organic farmers, plant protection professionals, authors and artists dedicated to reducing the threat of pesticide health harms and transitioning toward a regenerative, just and resilient food system.