The meeting can be viewed on YouTube at https://www.youtube.com/user/TheCityofCamarillo/live

For those in Camarillo who didn’t already know, Amazon has decided to focus expansion efforts in and near Camarillo in two areas. The first two large warehouse structures are at 3001 and 3175 Mission Oaks Blvd. ”Situated east of the Camarillo Airport, the class A distribution buildings total 733,819 square feet and are loaded with amenities, including 5 percent office buildouts, 69 loading docks, three drive-ins, 35-foot clear heights, 4,000 amp heavy power and a storage yard” as first reported on March 30, 2021 by Michael Aushenker of the San Fernando Business Journal. 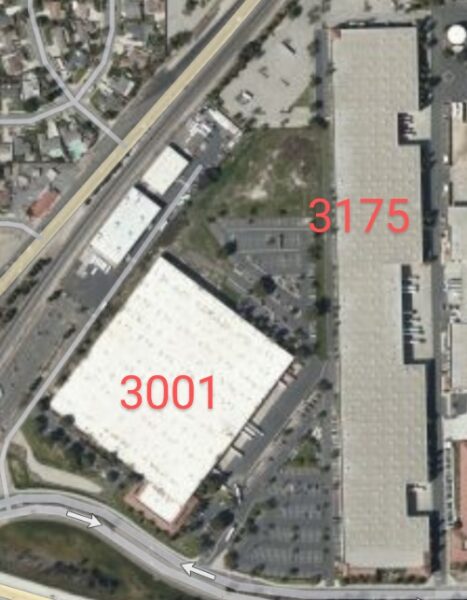 These buildings are adjacent to the rail corridor that runs from the port at Port Hueneme through Camarillo and on to destinations North and East of our city. In addition to this commitment, Amazon has also purchased and is building out a 1.5 Million Square Foot Fulfillment Center in Oxnard California. The photo below is a view of the site from Del Norte Blvd. 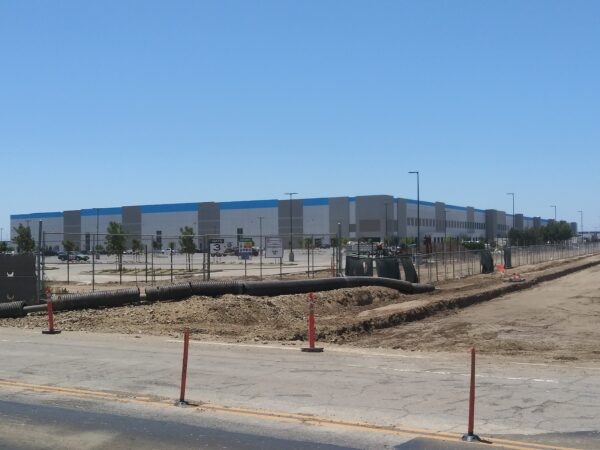 The location of the build out near Rice Road is actually substantially closer, as noted in this aerial view of the Amazon Fulfillment Center labeled “A”, in relation to the Camarillo Airport Complex in the picture here.

It would appear, as of the writing of this article, there are no structures between the current footprint of the Amazon Oxnard Fulfillment Center and the Camarillo Airport Complex.

Prior to this public meeting, the Camarillo City staff with guidance from the Camarillo Airport Ad Hoc Committee decided to find and vet a vendor to perform a city-wide survey of 500 people that will “bore down” into the opinions of the population and determine the overall scientific position our citizens have on the airport expansion.

As described by Camarillo’s Community Relations Officer Michelle Glueckart D’Anna “the survey will be a scientific, defensible position document that the city can use in the future to fortify its’ long held position regarding the General Use designation of Camarillo Airport”.

Fairbank, Maslin, Maullin, Metz & Associates, Inc will be doing the survey, but they were not at the city council meeting.

Per the city council, citizens have asked via emails and phone calls to their offices many questions. The proposed survey will ask between 50 and 75 questions, and will take about 20 minutes to complete.

The Camarillo Airport Ad Hoc Committee will be involved in determining the questions on the survey. This meeting was to authorize a contract to conduct a survey for a not-to-exceed amount.

Camarillo Area Transit 220% Fare Increase for the those over 55 and ADA was pushed back on during the public comments. The monthly fee of $25 was reinstated for residents ages 55+ and ADA on 3 May 2021 from a “no charge” across the board for all residents during the pandemic. THEN this weekly pass for Seniors and ADA riders was increased to $80 per month, to go into effect 1 July 2021. The eligibility age was also increased from 55+ to 65+. A number of the comments were regarding the lack of prior notification except a press release at the end of May, 2021. The press release and more information can be found at http://www.cityofcamarillo.org/news

There were also comments that opposed the sharp fare increase and there were suggestions to introduce the increase over a longer period to ease the shock on residents. None of the council members addressed these specific comments.

Anyone who wants to be notified of city press releases can do so by going here https://myemail.constantcontact.com/City-News.html?soid=1133288091662&aid=-P8OvwyFpqI

To view all happenings concerning the potential expansion of the Camarillo Airport and all other trending issues visit: https://www.ci.camarillo.ca.us/index.php/ and click the Hot Topics button. 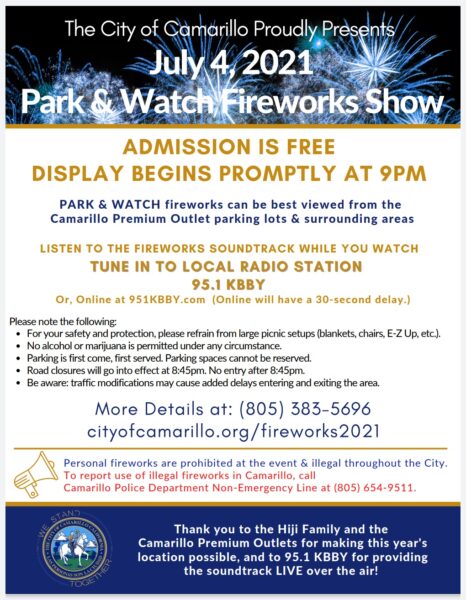 Fireworks are happening this year on the 4th of July. Please review this flyer. It has also been mailed to residents in Camarillo. As the COVID restrictions have been lifted, viewing areas will be in parking areas at the Outlets, and anywhere with decent elevation throughout the city.