Before introducing Wolf, Fox News host Tucker Carlson said the bill, if passed, would “completely remake America’s immigration system and the country itself for the sake of protecting foreign-born criminals.”

“Violent felons could not be deported back to their home countries unless they received at least a five-year sentence,” Carlson continued. “Even then, a judge could easily override that. The government meanwhile, meaning you, would have to pay to fly deported criminals back into the United States to resume living here.”

“If it became law, what would happen to the country?” he asked Wolf. 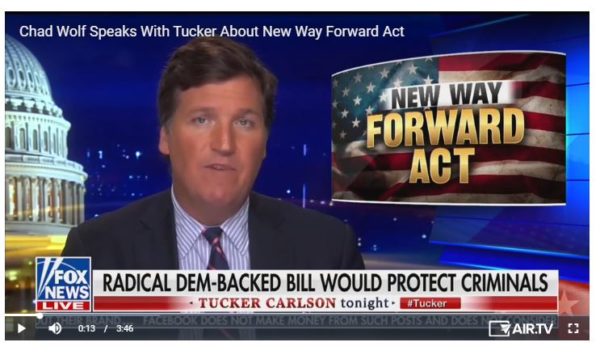 “Well, it’s very dangerous,” Wolf responded. “I would say it completely guts our immigration enforcement system that we have in place. It also is just from a pure legality perspective it just guts the rule of law. So, envision a world where individuals no longer have to wait in line for Visas. They can come across the border to no longer criminality to do that. They can then come into the system. We can’t deport them. Because we can’t hold people, it essentially abolishes ICE. Then, on top of all of that, going back 25 years we then have to find folks, bring them back into the country, re-litigate their immigration proceedings. So if you are looking for a way to abolish our immigration system, abolish ICE, and just rewrite our immigration code completely, this would be the legislation for you.”

“In effect, it would abolish the country,” Carlson responded before asking Wolf why anyone would want to “affirmatively seek out foreign criminals and import them into the country?”

Wolf contended that Democrats believe that “somehow the deck is stacked” against would-be migrants, when in reality they “have full due process.”

“We want to pay to bring the worst possible people into the country,” Carlson said, calling it “a kind of punishment meted out against America.” (RELATED: Tucker Reveals Democratic Plan To Protect Illegal Alien Criminals From Deportation, And ‘Fundamentally’ Change America)

Wolf acknowledged the bill’s dim chances with President Donald Trump in office, but said if its supporters are ever able to gain passage it would be “very dangerous for our country.”

“Again, you would have hardened criminals being able to come into the country illegally,” said Wolf. “We would have no ability to enforce that law and deport them, and so basically your sanctuary city policies that we have in effect around the country in several jurisdictions become nationwide. That may be the end result at the end of the day.”

“Boy, this is the kind of thing you do to a country you hate and clearly, clearly they do,” said Carlson.