“I’ll let Bernie Sanders speak for his comments,” DNC spokeswoman Xochitl Hinojosa told Fox News’ Bill Hemmer Tuesday. “We are very clear in the Democratic party that we speak out against brutal dictatorships like Castro.” 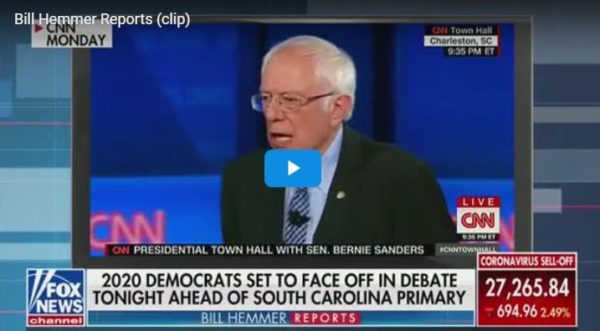 Sanders became the front-runner for the Democratic Party’s presidential nomination Saturday, following his landslide win in the Nevada Caucuses. However, the socialist senator drew a firestorm of criticism from both Republicans and Democrats after whitewashing Castro’s atrocities during a “60 Minutes” interview that aired Sunday evening. (RELATED: DNC Drops Putrid Fundraising Numbers In Middle Of Debate)

“We’re very opposed to the authoritarian nature of Cuba, but, you know, it’s unfair to simply say everything is bad,” Sanders said. “You know? When Fidel Castro came into office, you know what he did? He had a massive literacy program. Is that a bad thing? Even though Fidel Castro did it?”

Sanders was also criticized for his comments by former New York City Mayor Michael Bloomberg, who is also running for the Democratic presidential nomination.