POLITICS | Ventura Republican Central Committee, District 2. Anyone wonder why there are 7 new candidates running for this office?

For the last eight years members of this political committee have been running by pulling papers with only the number of candidates for the number of positions allotted for each district.  The Central Committee for the Ventura County Republican Party is divided up by board of supervisor districts. If only six people pulled papers for District 2 in any given election no one had to be voted on by the electorate.  That means in the 2nd District with six positions available and six candidates pulling papers to run, voters never had a choice on the ballot.

This organization has been a sorority/fraternity for, at least, the last ten years. What have they accomplished? Activity with no action leads to no results.  The new candidates for the 2nd District  on this 2020 primary ballot will support other party candidates and they will lead.  Currently endorsed party candidates have been left to campaign on their own with no support.

What does this organization supposed to do? The Central Committee is responsible for making endorsements of candidates and ballot measures and for conducting voter education and voter registration. The committee coordinates grassroots campaign efforts, to include phone banking, precinct walking and the operation of the campaign headquarters. This political position does not provide compensation and the overall committee meets monthly. At those meetings they should be conducting interviews of potential candidates and should apply party standards to their endorsement choices.

For the past eight years, the choices are whose friend is who. Ninety nine percent of the voting population have no idea there is a Central Committee nor what this organization stands for.

We promise to be fair, ethical, transparent, welcoming to anyone who would like to participate. We have a plan to educate the community as well as candidates to provide beginning candidate classes for possible candidates thinking of running then we will have classes for those who have decided to run. These “Fresh faces” will then have an advanced class to help each Republican candidate who has decided to run for office. 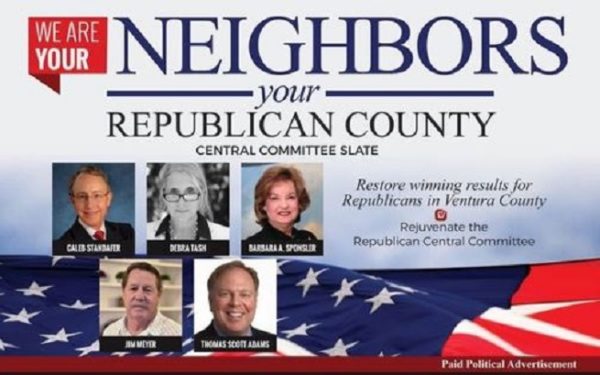 Barbara Sponsler is a retired banking executive, candidate for the Republican Central Committee and resident of Newbury Park.

Editor’s Note: This is an opinion article.

Very factual article written by a very substantial person. If you have any doubts about the past Central Committee, look at their results.