Please join us in congratulating Port Hueneme Police Officer Kimberly Mora who recently graduated from the Ventura County Sheriffs’ Police Academy on Thursday, April 2nd. Kim is the first Port Hueneme Police Officer to graduate from the police academy in over 20 years. We are very proud of her accomplishment as she completed an intense 24-week police academy which saw over 20 recruits dropout during this past session.

Kim was born in Oxnard and is one of five children. She attended Williams Elementary School, Blackstock Junior High and would ultimately graduate from Channel Islands High School in 2013. Kim put herself through college by working two jobs where she would graduate with an Associate’s Degree in Criminal Justice from Ventura College and a Bachelor’s degree in Sociology with Honors from Long Beach State. While in the Police Academy, she gained additional credits and obtained three additional Associate Degrees. After completing her police field training program, she would like to return to college to earn her Master’s Degree in Public Administration. Kim is also fluent in Spanish.

Kim found her love for law enforcement in 2015 when she became a Police Explorer for the Oxnard Police Department. She has vowed to pay it forward by becoming a Police Explorer Advisor after she has completed her 6-month field training program.

While our current situation is preventing a formalized swearing-in ceremony with family and friends, we will assuredly let everyone know when this happens. In the meantime, if you see Kim working with her field training officer, don’t hesitate to wave and say hi – from six feet of course. 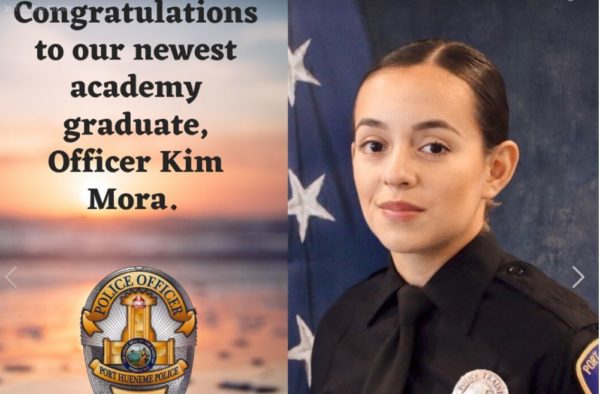 Editor’s Note: This was sent to us by Tom Dunn the publisher of Hueneme Voice