Julia Levin, the Executive Director of the Bioenergy Association of California, introduced the speakers and moderated a brief Q&A session at the end of the webinar.

Anaergia, a company specializing in renewable energy created with waste material, also inserts themselves into these major projects either in the form of DBOF (Design, Build, Operate, Finance) or some variation of this. Anaergia is not only a financial company with contacts in the municipal waste space, but has products to be deployed on the renewable energy project. One such product discussed in this webinar was the Orex, a proprietary extrusion system. Yaniv Scherson explained how the Orex fits into an existing wastewater infrastructure to expand its capabilities and create a distributed waste solution.

Mr. Scherson reminded the participants of California’s aggressive landfill diversion bill, SB1383, whose goal of 75% diversion by 2021 is near. Note that CalRecycle shows landfills as the “third largest source of methane in California”, while NASA/JPL says landfill is the number one producer of methane. 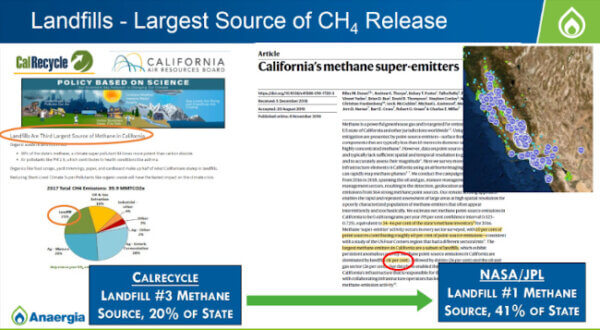 150 wastewater treatment facilities (WWTF) in California have anaerobic digestors (without air) so are capable of collecting methane from the treatment processing. Rialto is the largest organic waste digestor in North America. 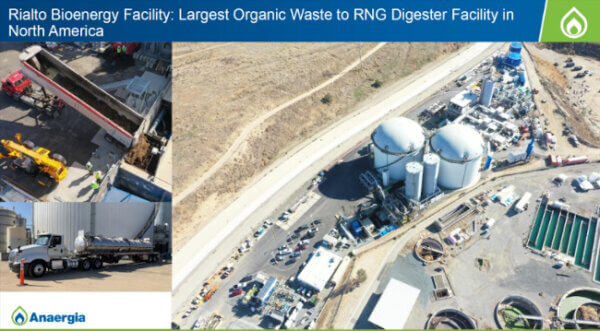 Mr. Hilary Gans, Southwest Bayside Waste Management Authority, said they have a diversion rate of 50% but not much food waste (FW) yet. He stressed that the WWTF cannot accept solids and contamination. They use the OREX, a $5 million investment from Anaergia, as a shredder, to extrude liquids, a polisher, to remove plastics, and to clean slurry, which is delivered to the WWTF for anaerobic digestion. The WWTF can become a power generator. He said that contamination into the wastewater feedstock will harm agricultural operations. During the Q&A session, Mr. Gans said there was a fire in his facility caused by a lithium ion battery. He did not elaborate on how the battery entered the processing stream.

Darren Poulson, Victor Valley Water Reclamation Authority, is injecting RNG (renewable natural gas) into the gas grid created at this plant. They convert biogas from sludge and external organic waste into the pipeline of South West GAS. The gas sent to the pipeline is clean and free of particules. Anaergia, as a partner, identifies feed stock customers. VVWRA can price its tipping fees below other such processing plants because of its distance from the source. Both the sale of RNG and tipping fees are new revenue sources. See the CHP in the chart below (cogeneration). 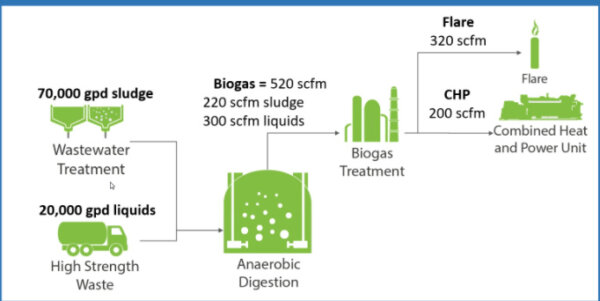 Sam Wade, director of regulatory affairs, explained that SB1383 was passed in 2016. CalRecycle has published regulations. Powerpoint presentations of the various components are available for download with scripts.

SB1383 plans an Edible Food Recovery process where restaurants and groceries send their unused or outdated product to agencies of CalRecycle for distribution to Food Banks.

SB1383 also requires a new bin for sorting food wastes. This bin will be black. CalRecycle has produced a document showing progress toward the SB1383 goals. Download this document here.

Mr. Wade stated that public policy support is not aligned with production and end users. There is little incentive to sell industrial and hard to compete with solar and wind based on current incentives. Transportation adaptation of RNG is strong. RNG should be a part of California Low Carbon Fuel Standards LCFS, he said, but is not.

The Question and Answer section started at the last 15 minutes of the webinar. Click here to view the webinar on Vimeo. The next webinar is renewable hydrogen on July 14, 2021.

China banned import of U.S. recyclables in 2017, which exacerbated the landfill growth problem. This was not discussed at the webinar.

Here is a summary of non-landfill waste solutions. One technology is pyrolysis which was discussed in the Q&A as a solution to PFA removal which is gaining huge traction in California. Ten California wastewater plants were directed by the Water Board to monitor PFAs.

The Las Vegas Mega Dump has taken a completely different approach. Watch this video. Rather than a separate product at the WWTF, they extract the methane from the dump in situ. This was not discussed at the webinar. EPA considers this approach renewable: read here.

Does RNG Qualify as Renewable?

Although not discussed at the webinar, there is a contingent claiming RNG is not renewable. Although the process removes methane from landfills and thus from the atmosphere, there are those who feel the burning of methane is still an issue. Here is an article with discussion from both sides: Why utilities aren’t doing more with Renewable Natural Gas

For more information about the author, click sherylhamlin dot com

Way too little, way too late.

Bcuz of all the deniers of reality the only solution left is conversion to nuclear. This burning methane crap might make you feel better but it won’t do jack to solve the problem y’all created.

Video of Rialto plant and process…

The solid residue of wastewater processing, known as sewage sludge aka biosolids, was formerly classified as a hazardous waste. It has about the same energy content (BTU) as coal. It is applied to farmland throughout the U.S. as a soil amendment. It carries a wide variety of pathogens that become spread into the environment. Additionally, when put on lands, it off-gasses about 3,000 cubic feet of methane to the atmosphere for each applied ton. Millions of tons are applied to the U.S. lands each year. Thus through its use, it releases toxic chemicals, antibiotic resistant pathogens and climate change gasses.