Researchers Studied When and Why NYT Changes Headlines 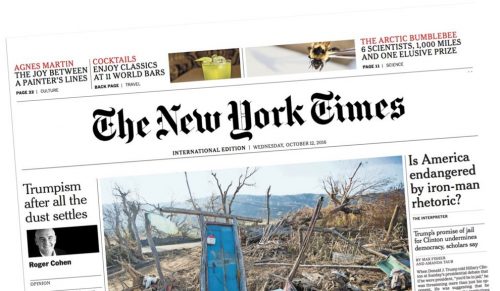 Their study, All the Headlines that Are Fit to Change: Analysis of Headline Changes in the Media Industry, used Ground News’ Blindspotter to measure partisan engagement of stories on The Times’ website.
The researchers concluded that New York Times editors are more likely to change a headline – or run an A/B test in which two headlines are shown to random groups of users to determine which is more popular – on articles that elicit more engagement among more partisan readers. The researchers used Ground News’ Blindspotter tool, which allows users to analyze the partisan balance of any Twitter user’s news consumption, to determine the ideological leanings of users who engaged with New York Times articles.

Strumpf and Leung also concluded that New York Times editors also are more likely to switch headlines or run A/B tests on stories that are more popular on the newspaper’s homepage. In reviewing every article on the site’s home page for the first half of 2021, the researchers found that 14% have an immediate headline change while 6% undergo an A/B test in which two titles are shown to visitors over a short time window.

The researchers said their research suggested that “economic, rather than partisan, motives are the driving force behind the New York Times headline change strategy,” since the revised headlines attracted a larger, but not necessarily more partisan, audience. The finding is important, they said, since it suggests that the strategy is not about exacerbating partisanship but rather about expanding audiences for stories. If headline changes were driven by partisan motives, there would be greater polarization in which accounts are tweeting the article. However, the Wake Forest professors found no strong evidence for such a divergence.

The Wake Forest professors obtained a measure of each Twitter account’s partisanship by using a dataset provided by Ground News Blindspotter. They then measured engagement with New York Times content across the ideological spectrum of Twitter users. The researchers used Blindspotter data to quantify the partisan leanings of readers who engaged with Times stories, as the newspaper did not share reader data with the Wake Forest duo.

“We created the Blindspotter tool to help people more easily visualize their own news bubbles, and also to empower them to overcome their own biases and enrich their news diets,” said Harleen Kaur, the Ground News co-founder and CEO. “The fact that academic researchers are using the Blindspotter in their own academic studies really shows the value of this tool. You don’t need a Ph.D. to unlock the potential of the Blindspotter. Anyone can use it and may be surprised by what they discover. We set out to challenge assumptions and really put the news consumer in control.”

The results from the working paper are still preliminary and have not gone through peer review. The professors will continue to refine their estimates as they use Blindspotter and other data.

ABOUT GROUND NEWS
Launched in 2020 by former NASA engineer Harleen Kaur and award-winning app developer Sukh Singh, Ground News is a platform to empower media consumers to balance their news diets. Ground News pulls content from more than 50,000 news sources across the ideological spectrum and geographies, using algorithms to identify reliable sources and to filter by ideological bias. In a world suffused with misinformation and bias, Ground News is a trusted information utility to empower readers to easily navigate the news, using cutting-edge tools to enrich the media experience – because an informed citizen is better equipped to make decisions.

Central Union Mission: A Place Of Hope And Security For The Homeless In Nation’s Capital