A sparse and socially distanced audience at the inauguration of President Joe Biden at the U.S. Capitol on Jan. 20, 2021. (Video screenshot)

One year after the Jan. 6 Capitol riot, President Joe Biden gravely informed the nation that the incident, during which exactly one person, an unarmed female pro-Trump protester, was killed – shot to death at close range, without warning, by a Capitol Hill policeman – was “the most significant test of our democracy since the Civil War.”

Biden delivered this extraordinary assessment immediately after Vice President Kamala Harris solemnly equated the out-of-control D.C. protest to both the Dec. 7, 1941 attack on Pearl Harbor that killed 2,403 Americans and injured 1,178, and the Sept. 11, 2001 terror attacks that killed 2,977 Americans and injured over 6,000. The Civil War killed an estimated 750,000 Americans.

How, normal Americans wonder, is it possible that the nation’s top political leaders could make such obviously insane statements? More important, what do such bizarre pronouncements say about where the progressive elites are secretly leading the nation?

Although today’s Democratic Party does indeed seem completely insane and therefore unpredictable – insisting men are actually women if they think they are, claiming Biden’s multi-TRILLION-dollar spending programs and wild currency creation will “reduce inflation,” engineering a full-scale invasion of the American homeland by millions of illegal aliens so Democrats can stay in power forever, and so on – there actually is one reliable way to determine with uncanny accuracy what these revolutionary-minded Democrats are up to right now, as well as to gauge what they are secretly planning for the future.

Those on the revolutionary Left are, and always have been, slaves of projection: the compulsion to accuse others of the very sins and crimes of which they themselves are guilty.

* The Democratic Party, which is totally obsessed with race – insisting on hiring, discriminating against, and even (in the age of COVID) denying medical treatment to people solely on the basis of their skin color – accuses those who embrace a color-blind America of being “racists.”

* The Biden administration daily refers to regular Americans – say, parents who attend school board meetings to protest the Marxist indoctrination of their own children – as “violent extremists.” But when during the summer of 2020, actual violent extremists – virtually all on the Left, including Black Lives Matter and Antifa – destroyed, looted and burned down dozens of major American cities, killing dozens, wounding over 2,000 police officers and causing 1,300 times the damage as the Jan. 6 riot, Democrats and big media praised the massive, murderous riots as “mostly peaceful,” noble and historic protests.

* The Democratic Party has long smiled on election fraud and abuse. Democrats’ indefensible opposition to Voter ID laws, their expansion of Election Day into “Election Month,” their unconstitutional alteration of state election laws in 2020, their promotion of universal vote-by-mail with the simultaneous abandonment of traditional safeguards, their advocacy of the fraud-plagued practice of “ballot harvesting,” their perverse opposition to cleaning voter rolls, and a multitude of other strategies all testify to their love affair with election fraud. Meanwhile, conservatives who support the most basic, commonsense, universally accepted standards like Voter ID are gaslighted as “white supremacists,” accused of “voter suppression” and, as Biden repeatedly insists, promoting “Jim Crow 2.0.” This despite the fact that a large majority of black and Hispanic voters in the U.S. favor Voter ID laws!

* Democrats endeavored relentlessly, throughout Donald Trump’s presidency, to illegally and immorally wrest control of the government from America’s elected leaders – including two fraudulent impeachment trials, the fraudulent three-year Mueller investigation and a fraud-plagued 2020 election. Yet today’s super-radicalized Democratic Party is continually accusing law-abiding conservatives both in and out of government of conducting an ongoing, multi-faceted “insurrection.”

The bottom line? Americans can be absolutely sure that insurrection – and in fact, a total Marxist “reset” of the greatest nation on earth – is exactly what today’s ruling elites have in mind.

The reality of this is stunningly documented and explored in the January 2022 issue of WND’s acclaimed Whistleblower magazine, titled “THE REAL INSURRECTION: Branding normal Americans as ‘terrorists,’ Democrats pursue total revolution.” 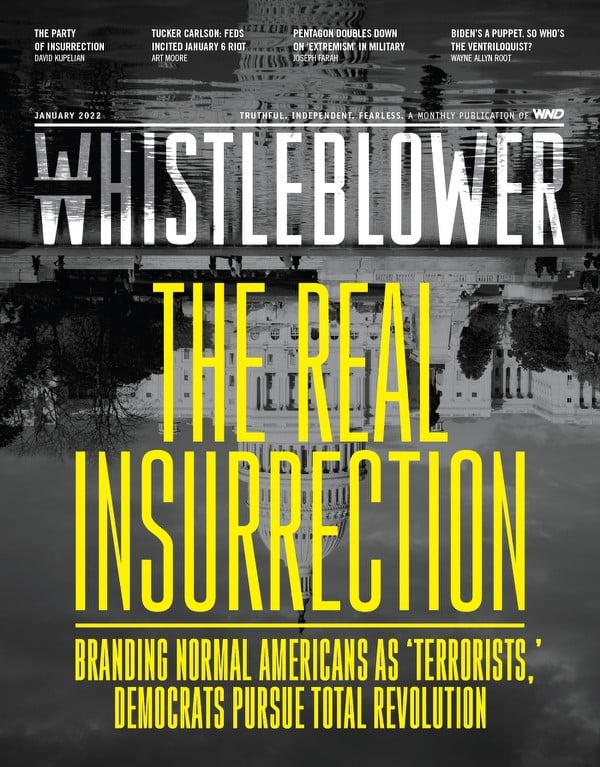 Of course, the Left is always trying to “reset,” “reform” or “transform” the world, as it holds a fundamentally revolutionary worldview. Barack Obama, just prior to being elected president in 2008, famously boasted, “We are five days away from fundamentally transforming the United States of America.” Echoed Joe Biden, before he was elected president in 2020, “[We] won’t just rebuild this nation – we’ll transform it.” And Senate Minority Leader Chuck Schumer, breathlessly anticipating the Georgia runoff races that would give control of the U.S. Senate to the Democrats, announced with a flourish: “Now we take Georgia, and then we change America!”

What are they all really talking about?

Democrat leaders pretend to seek a compassionate society where discrimination against minorities is no more, and where justice and equality prevail. But that is not at all what they truly want.

Under the banner of the “Great Reset,” progressive-Left elites in America, as well as globally, are totally obsessed with leveraging every crisis – whether real (COVID-19) or fake (the earth will be totally unhabitable in 10 years due to man-caused “climate change”) – into the establishment of a completely new authoritarian system. With them in charge.

Now, there’s an insurrection for you.