New York, NY, April 6, 2022 — Russian investors have experienced less financial loss than their American counterparts since the start of the war in Ukraine, revealed a survey released today by Investing.com.

In a survey of 1,385 American respondents, 72% reported that their investments have lost value since the start of the Russia-Ukraine war. A separate survey of 1,478 Russian investors, however, found that only 52% have lost money following the crash of the Russian stock market in late February — and 56% have earned on the fall of the ruble.

“In addition to geopolitical-related selling pressure resulting from the Russia-Ukraine conflict, sentiment on U.S. stocks has also taken a hit from the Federal Reserve’s plans to aggressively raise interest rates in the months ahead,” said Jesse Cohen, senior analyst at Investing.com. “While the Russian stock market plunged in value since the invasion began in late February, ironically, it is foreign investors who own the majority of shares that are available to trade on the Moscow Exchange, rather than Russian retail investors.”

More than half of American investors have made changes to the portfolio during the war, including 17% who added investments in gold and another 17% who added investments in oil, according to the survey. Around 1 in 10 investors are seeking opportunities with Russian-based stocks that are listed on American indexes, and nearly 20% would consider buying Russian ETFs at this time. In the survey of Russian respondents, nearly 50% of investors said they are looking out for opportunities to buy shares of Russian companies at low and attractive prices.

“Despite the negative impact of harsh Western sanctions on Russia’s economy, long-term buying opportunities are starting to emerge as a result of the historic collapse in stocks of leading Russian companies, most notably energy and commodity producers, such as Gazprom, Lukoil, and Rusal,” Cohen continued.

In both the U.S. and Russia, the Ukraine war has mostly added to the perception of cryptocurrency as a risky investment. Among American investors, 52% believe cryptocurrency remains “very risky,” while sixty-one percent of Russian investors also feel that there are too many risks associated with cryptocurrency. That said, nearly 30% of U.S. investors said they could understand how cryptocurrencies might be an attractive alternative for investors in distressed markets.

“Essentially, there have always been worries that rogue states could use cryptocurrencies to evade sanctions and move billions of dollars around the world in secret,” said Cohen. “The Russia-Ukraine war has done little to change that perception.”

Understandably, Russian investors are maintaining a relatively pessimistic attitude about the stock market in their country, with 60% anticipating a complete decline followed by a long and slow recovery. Even of those who hold a positive outlook on the Russian economy, 62% believe a recovery of the Russian market will take three to five years or longer after the lifting of sanctions.

American investors are more optimistic about their stock indexes, with 52% expecting either a rapid recovery followed by rapid growth or flat, range-bound trading for the years ahead.

The full survey can be found here: https://www.investing.com/blog/russian-investors-report-less-losses-than-their-american-counterparts-since-start-of-ukraine-war-but-how-308 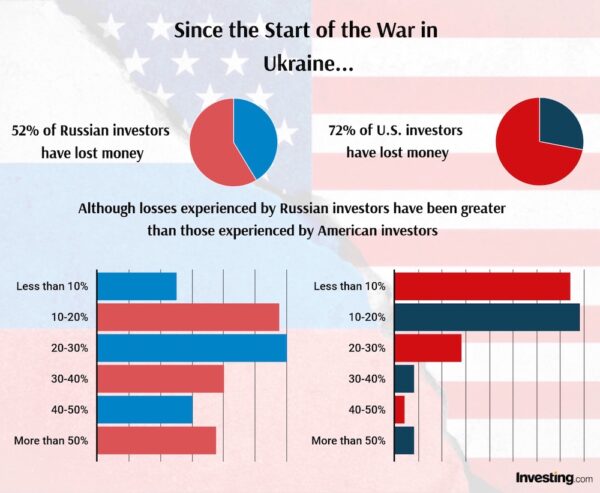