The web of entities with interests in the Salton Sea includes big and powerful commercial and governmental interests as well as citizen groups.

The first Geothermal plant, Salton Sea 1, was operational in 1982 (source: Wikipedia. This plant is owned by CE Generation, LLC, an Omaha Nebraska company with ties to Berkshire Hathaway Energy. There are now 11 geothermal plants at the Salton Sea with another in progress sending energy to the grid.

In 2003, the Quantification Settlement Agreement (Wikipedia) gave hundreds of thousands of gallons of Imperial County water to San Diego, thus stressing the drought stricken area’s ability to renew itself.

An Australian firm, Controlled Thermal Responses, is planning the 12th geothermal installation to provide power for lithium mining. General Electric has indicated interested in this lithium for its EV division. (source: Wikipedia) Here is a rendering of the massive project: Rendering

The County of Riverside obtained a grant to restore the Albert Frey designed Yacht Club in 2010 which is now on the National Register of Historic Places. Source: Atomic Ranch Albert Frey.

KESQ produced a four-part video series “Troubled Waters” which gives a sense of the unsolvable health and environmental issues. Can this area ever be made safe for human or animal life? Source: KESQ video

Citizens and residents of Imperial county near the Salton Sea are experiencing respiratory diseases and see no abatement. Source: Toxic fumes. And as far away as Brawley and Calpatria health issues from air quality are measurable: County wide health issues

The Torres Martinez Desert Cahuilla Native Americans have lived on the land near the sea for generations. Cultural heritage is a challenge as well as environmental restoration. They call it an oasis and hope for restoration through wetlands. Torres Martinez video

From the Salton Sea Management Program Website (SSMP), the goals of the March 2, 2022 meeting were as follows. Sarah Friedman facilitated the three-hour meeting.
* Provide the status of the planning process
* Solicit feedback from the committee members on preliminary restoration concepts
* Solicit feedback on evaluation criteria to evaluate restoration concepts
* Discuss community engagement and the schedule of future meetings

An independent review panel on water important has been established: Water Import Panel

Dr. Brill Brownlie, Chief Engineer of Tetratech, a firm who has consulted for 15 years to California Natural Resources Agency (CNRA) BIO, explained that all costs are being updated to 2022 dollars and a hydrology modeling is in process which will be merged with the water importation studies.

Dr. Brownlie announced that the only concepts under study now are without water import, presumably they are awaiting the abovementioned water import study. The concepts presented are historical but he noted that there is a form for new concepts to be submitted. The concepts presented were: I. Baseline 10 year Plan, II. Marine Sea (2006), III. Divided Sea (2007), IV Updated Perimeter Lake, V. Pump Out. None of these concepts included the existing geothermal plants in the schematics or the proposed lithium geothermal plant nor was there any discussion about how the existing baseline plan would be affected by future geo and mining projects. 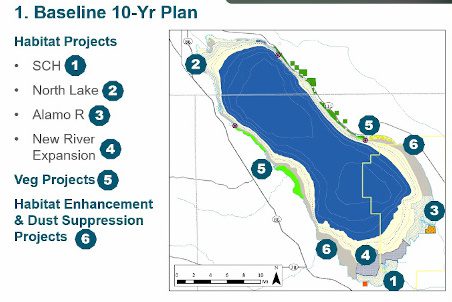 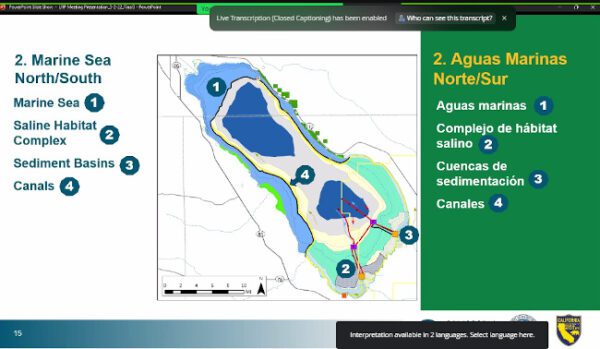 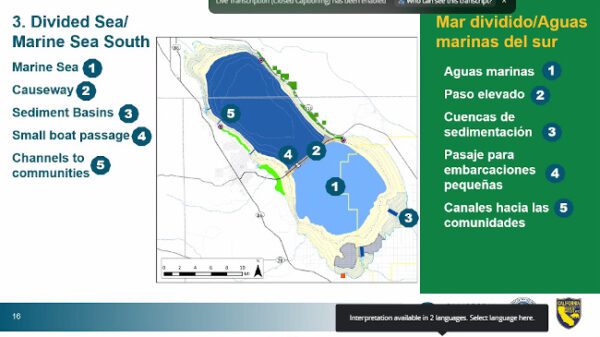 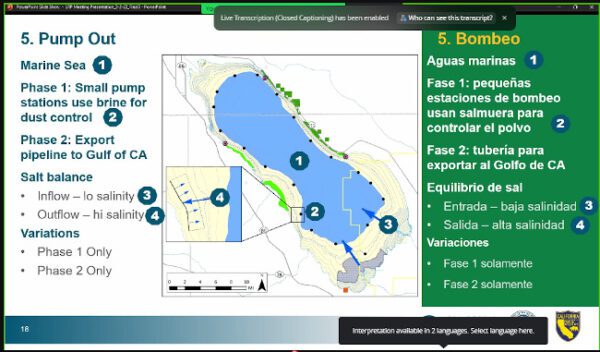 The Salton Sea Authority has published proposed solutions from the last 15 years. Proposed Solutions The Perimeter Lake solution was popular at one time: Perimeter Lake

During the discussion of the concepts, it was noted that the Pump Out Concept is similar to the Owens Lake project with 20-25 pumping plants, where Los Angeles County has spent millions on dust control and continuing. Luis Olmedo was concerned that the pump out process would simply transfer toxins from one area to another without capture.

Chuck Parker said that conditions regarding greenhouse gas emission (GHG) have changed drastically over 20 years and reported on a report by Jenny E. Ross who claims that the lake was not founded accidently in 1905 and presents research: Ross Report

Michael Cohen was concerned how the solutions would be synchronized with the hydrology model if the latter were not finished so that the solutions could avail themselves of it. G. Patrick O’Dowd expressed similar concerns and also posed a hypothetical question about the future of agriculture in the Imperial valley.

Tom Sephton asked who is allowed to submit concepts? Where will harmful brine be sent in the Sea of Cortez and will Mexico accept the brine? Dr. Brownlie said that there are no constraints on submittals except that they are not considering water importation at this time.

Howard Elmore questioned why there is nothing involving the soil along the sea and what actually makes up the shoreline, as well as agriculture and dust suppression. Dr. Brownlie said there is a twenty-year-old soils report. Geotech investigations now into the depth of the waters and agreed there could be some reclamation.

Nelda Ruiz stated that water quality is more than just salinity and questioned if additional filtration were planned. Dr. Brownlie said that phosphates and nitrate filtration is in preliminary discussion and would be a major consideration for any pipeline.

The moderator presented the Evaluation Criteria which the Long Range Planning process would use and asked the members to augment or prioritize this list. This process was lengthy and will be summarized in the meeting notes. 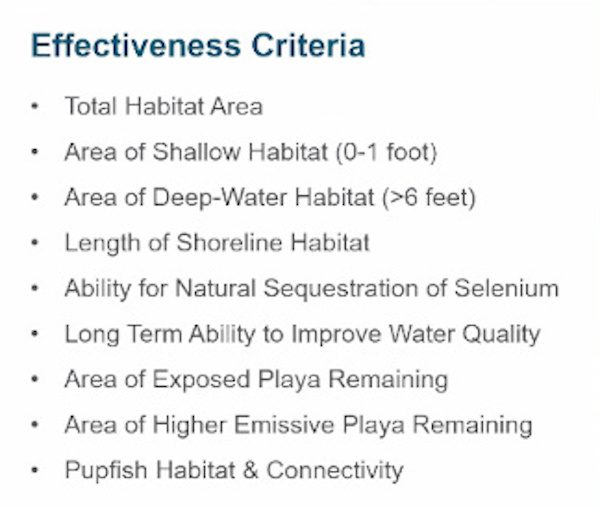 The Sea was popular in the mid-20th century as a resort and a community. These pictures show then and now: Then and Now

Lithium mining no friend to the earth…

Practical ideas about water, Lake Mead and the Salton sea. All related…

Nothing clean or green about lithium mining….

Salvation Mountain near the Salton Sea…homage to Christianity…

Homage to SIN!!!!!!! Read your bible. Its a sin to worship idols and a sin to create graven images.

THE END IS NEAR. Repent your sins NOW or suffer your fate when you stand before Christ as your Judge.

As the Salton Sea dries up, picture the entire area looking like what is shown in the picture in this link. Remember drillers do not want restoration. They want a dry bed….. 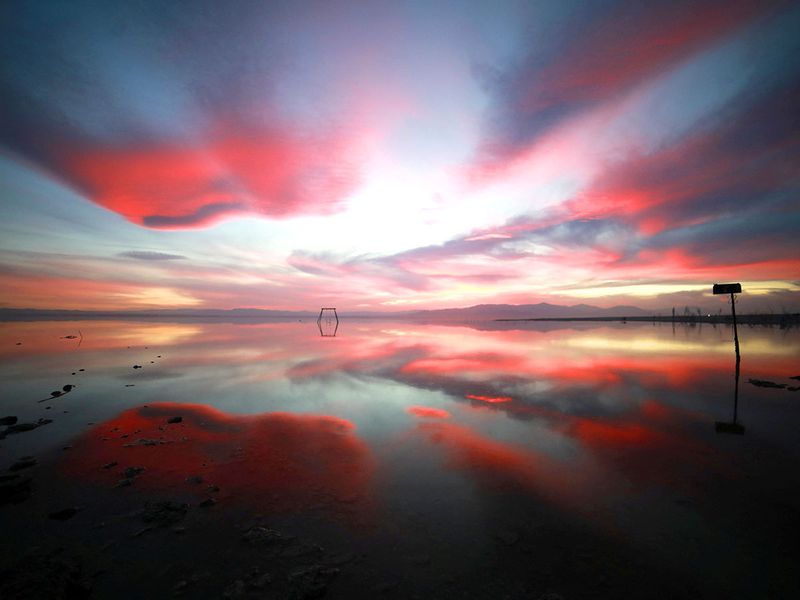 …The San Andreas Fault has three sections. The southern section runs from the Salton Sea to Parkfield, California, and has the capacity for large quakes…

What if drilling for lithium reaches an ancient aquifer that is feeding the area or disturbs a fault?