Greg Calkins, who attended last year on the same topic, said the issue was not only pets, but people with PTSD for whom the fireworks bring back troubling memories. He had three ideas: 1) social host laws for illegal fireworks which numerous cities have enacted, 2) city wide campaign about the dangers of fireworks and 3) signs everywhere indicating fines for the use of fireworks. He told the council about a tragedy in Visalia where an illegal firework hit a tree, the flaming branch fell on a house which burned and killed the owner and his 13 Chihuahuas.

Pat Kennedy also spoke on fireworks saying these were good ideas, but we need to start now to prepare for 2020. We should involve Ventura County Fire Protection District, Santa Paula Police Department and surrounding cities. Laws can be changed to enforce the illegality of the fireworks. She also suggested citizen meetings to improve the plan. Council is a one-way conversation, but a citizens’ council would be useful. She was disappointed that more of the vociferous members of Nextdoor did not attend to speak. Now is the time to start, she reiterated. 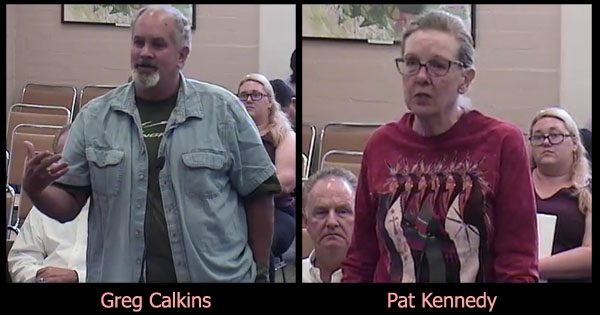 Note that previously in the Santa Paula Police Department Report given by Cmdr Varner, the statistics on the July 4th arrests were reported. There were 180 calls on the 4th of July with 60 relating to fireworks. From that, the SPPD issued 3 citations, confiscated illegal fireworks and issued numerous warnings. He reminded the audience that the SPPD must actually catch people in the act of using the fireworks to cite.

City Manager Rock announced his acceptance of the top job in Yuba City saying that it was a difficult decision. He was impressed how the citizens appreciated city government in Santa Paula and had enjoyed his two year tenure. He would be in Santa Paula for the next 30 days to help with transition.

I was in the Army during the Nam war. As a child in the 50’s and 60’s, I played with M-80s, cherry bombs, assorted firecrackers, rockets, etc. I say make the fireworks for individual use legal again. Those people complaining about some fireworks noise and fire annoy me. Wimps they be. I would not want to have them as teammates in military service.

What has our nation become?

In 1945 there were far more veterans home from the horrors of WWII than there are presently, even with the endless warfare we seem to be engaged in today.

In 1945 fireworks were far more ubiquitous than they are today. For those of us whose parent forbad the pleasures of setting off a few M-80s, we took large bolts, several washers and a nut and loaded the contraption with as many caps as we could and spent the Fourth of July day slamming them down on the pavement where they provided a quite satisfactory boom. The day was filled with the sounds of explosions and the night with rockets and other fireworks as our founding fathers fervently hoped the day would be celebrated.

I don’t remember hearing complaints from WWII vets about their PTSD being reactivated. Many of them took part in the fireworks and firecracker activities. In the late 40s, 50s and 60s almost everybody I knew had served in one capacity or another in WWII.

While I wholeheartedly agree with the concept that even if it is only a squad engagement, it is 100% combat and you are totally involved, ISIS and the Afghanis don’t compare to the Wehrmacht nor the Imperial Japanese Army. ISIS doesn’t have anything to compare to the 88s of the German Army or a Tiger tank and no matter how ferocious the Afghanis may be they don’t compare to a banzai charge mounted by a Japanese regiment. Nor does recent action compare to the kamikaze attacks off the Philippines or Okinawa or the campaign to take the Shuri escarpment or wading ashore at Peleliu or hanging on by their fingernails in the jungles of Guadalcanal not to mention that most ferocious battle of all, Iwo Jima.

Why is it none of the WWII vets were calling up the P.D. complaining about the noise of celebrating our independence, such as it is today, activating their PTSD? Why were they out partaking in setting off their own fireworks in celebration of the day? Is it because we have become ashamed of the uniqueness of our declared form of government? Or have we become a nation of fearful, whiney cowards where the slightest loud noise causes us to quiver in fearfulness and causes some of us to want to hide under the bed or in a dark closet?

I don’t know the answers to my questions, but I do wonder about the future of this country.

Quite a few were upset about the illegal Oxnard Fireworks too. There were over a thousand complaints, one death and one serious injury. The Assistant Police Chief spoke at the council meeting on it and was very frustrated about their inability to control it. Over one hundred officers were on duty the night of the fourth.