With less than two weeks before the end of fiscal year 19/20, the City Council of Santa Paula held another budget session on June 17, 2020.

City Manager Singer opened the session with the reminder that we still must re-examine/resolve the deficit in the current fiscal year as well as the projected 12% decline in revenue for fiscal year 20/21. He said, we must tighten the belt and re-examine regularly going forward. The “strong” Measure T Commission, he said, recommended using unspent unallocated monies applying a new allocation formula with more going to the police.

Finance Director Ramirez gave the highlights of the work on the budget to date.

The city also sold a property recently; some of the sale will go to the budget and some to the reserves.

Finance Director Ramirez produced a new forecast through the fiscal year 25/26. The graph show the precipitous drop in revenue starting in FY 20/21 with a slow upward climb back to the current level. The gold line is Salaries and Benefits and Operating Expenses, the blue line is revenues, the red line is just Salaries and Benefits and the grey line is just Operating Expenses. Note that the budget is closely balanced for FY 20/21 (pending labor negotiations) and negative thereafter. 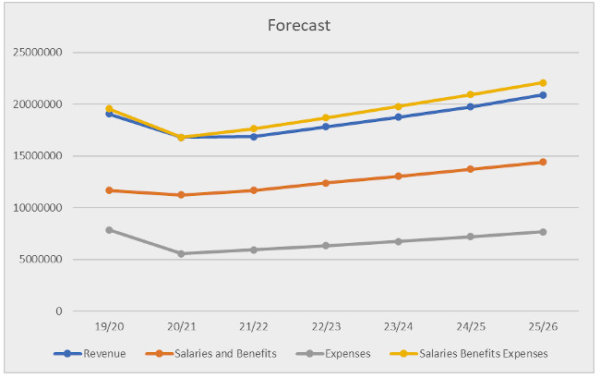 The Finance Director also provided a forecast of the General Fund contributions to CalPERS (pension) for the unfunded liabilities which will increase over $462,000 between fiscal years 20/21 and 25/26. She also presented a chart showing the payments for pensions through 2034 using the current 30 year amortization schedule, a 15 year schedule and a ten year schedule. These are respectively: $24,075,174, $21,722,023 and $18.428,019. A combination of a shorter amortization schedule and the benefits of early funding offered by CalPERS will save the city money, she said.

The austerity budget is driven by the fact that General Fund revenues for the upcoming fiscal year will decline by 12% from $19,080,015 to $16,809,079. The contributors to this decline in revenue are shown in the chart below:

Departments cut their budgets to maintain services and staff as shown in the chart below. There were no layoffs proposed.

City Manager Singer announced that on June 24th, there would be another session to finalize the budget. To download the staff reports, click here.

Mayor Araiza announced that United Water Conservation District will not raise the rates for the upcoming year as recently proposed. Read about that here. That decision will positively affect the Water Fund.

Referring to current and future projected deficits, Council Member Crosswhite asked “How do we spend money we don’t have?”