The CFD (Community Facilities District) aka “Mello-Roos” for the East Area One project was first approved by council in 2016 for $63 million in financing. Read about that council action here. Subsequently, Limoneira requested an increase to $77 million in CFD financing at this 2018 meeting.

The Development Agreement updated in 2011 (only one posted on the city website) indicates various forms of financing including but not limited to Mello-Roos. See Section 6.3 Establishment of Financing Mechanisms in this document.

What is a Mello-Roos District?

According to this document from Nuveen, a Mello-Roos is a “land secured municipal bond” defined as follows:

Land-secured municipal bonds primarily finance basic public infrastructure projects such as roads, water and sewage lines, lighting, traffic lights and other essential components of real estate development. This financing tool generally supplements the overall capital funding plan of a development project. These bonds are referred to as “land-secured” because the obligation to pay special taxes and assessments that ultimately pay debt service on the bonds typically attaches to the land itself.

During the real estate market stress between 2008 and 2011, CFD delinquency rates soared, in some cases reaching 25%, but California ultimately experienced low levels of defaults partly due to the strength of the state’s of CFD financing structures. .

According to Bloomberg, the state currently has $11.8 billion in land-secured bonds outstanding, with only 2.2% classified as distressed.

Per the Staff Report Item 11, the rates for the East Area One project are set as follows: 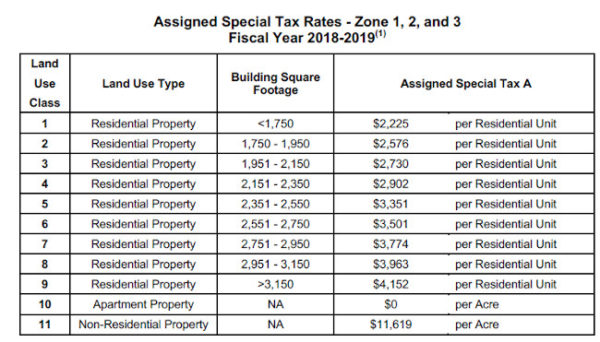 According to Zachs Finance, the Mello-Roos is subject to an annual increase of from 1% to 2%.

Sheryl Hamlin submitted a question electronically which was addressed numerous times during the discussion:

https://www.treasurer.ca.gov/cdiac/default-draw/issuename.asp
The Mello Roos market collapsed in 2008. This century has seen CFD defaults, as has the last century. LA times produced a detailed study of cities who had to keep the CFD bonding afloat. With only 45 homes in EA1 sold, who will pay the principal and interest? What is the backup plan for the proposed $20 million sale?

James Wawrzyniak from Jones Hall, attorney and city of Santa Paula bond counsel, repeatedly said that 2020 is not 2008 in that the policies have changed, primarily the 6:1 value to lien ratio which was much less than this in 2008. Furthermore, by breaking the CFD into small sections, risks are mitigated. Note that this sale is $20 million. David Fama from Jones Hall reminded that there is a two year reserve of interest payments, presumably held back from the bond sale from use as distribution.

Sara Oberlies Brown from Stifel, when responding to Council Member Crosswhite’s question about not enough sold homes to pay the interest, said that a developer who has put over $100 million in the project and three national home builders are not going to walk away from a $40,000 to $50,000 payment.

When asked, also by Council Member Crosswhite, what is the plan if the bonds do not sell, Ms. Brown chuckling said “it won’t happened and has never happened”. Presumably because investors (mutual funds, pension funds and family trusts) desperate for yield in the ZIRP (zero interest rate policy) and NIRP (negative interest rate policy) world are desperate for consistent yields, such tax-free municipal bonds remain popular.

Administration of the Bonds

After the bonds are sold by Stifel, Nicolaus & Company, the underwriter who buys and then resells the bonds, the funds are deposited into a trustee account who maintains all the ownership records.

When a developer wants to be repaid for work, he submits the bill to an advisor hired by the City, who will verify completion. Note, the item must be related to the list shown in this article: CFD approved list

Packet page 245 shows Priority Administrative Expense starting at $35,000 and increasing. This was not clarified.

The item was approved unanimously with Vice Mayor Juarez recusing from his garage office.

To learn more about the author, click sherylhamlin dot com

The CFD bonding was increased in 2019 as follows: