On Wednesday May 27, 2020 at approximately 8:40 AM, an SPPD Detective was traveling in the area of westbound 126 Freeway and Hallock Drive. The Detective observed a suspicious vehicle and conducted a records check of the vehicle’s license plate. The vehicle returned as a stolen vehicle out of the City of Bakersfield.

SPPD patrol units and an additional detective responded to assist. The vehicle exited the freeway at 10th Street and turned northbound. An SPPD patrol unit attempted to conduct a traffic enforcement stop and the vehicle failed to yield.

A brief pursuit occurred with the vehicle traveling in excess of 55 MPH, failing to yield for several red lights and stop signs. The driver yielded in the area of Ventura St and 12th Street. The driver, later identified as Nathaniel Crites, fled the scene on foot and the passenger, identified as David Honeycutt, was detained inside the vehicle. Officers lost sight of Crites and a perimeter was established. Ventura County Sheriff’s Deputies were requested along with an SPPD K9, VCSO K9 unit and the VCSO Helicopter.

As officers were conducting a K9 search for the suspect, an observant citizen saw a suspicious person in the area of Ventura St and 13th St. SPPD officers responded to the location and Crites was taken into custody without incident. The passenger, Honeycutt, was placed under arrest for being under the influence of a controlled substance. Crites was charged with vehicle theft and evading.

Anyone with information regarding this incident is asked to contact Acting Detective Sergeant Dan McCarthy at (805) 525-4474 ext. 282 or [email protected] 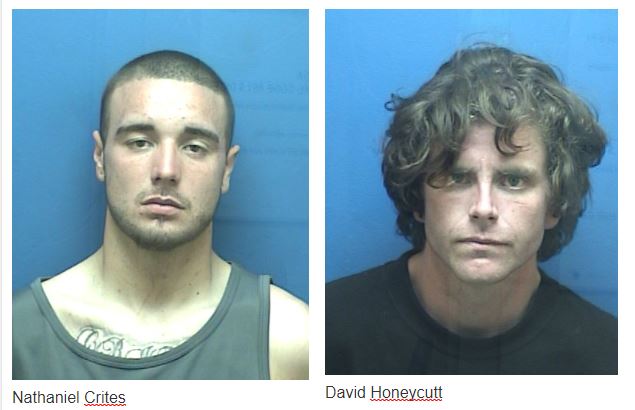