Sewer and Water rates have not increased in years, according to commentary at various meetings. The number 8 has been used as well as the number 7. What we know for sure is that NBS was hired both in 2014 and 2016 for a rate study and no action was taken to raise the rates. The council spent one hour on this topic on July 17, 2019.

The degradation of the fund balances has been exacerbated by increased expenses. In particular were two sewer spills, not covered by insurance. Read about the 2015 and 2018 spills here: Spills and More   It is obvious there was no insurance audit when Santa Paula bought the plant in 2015. Purchase press release here: Purchase Press Release

Borrowing a fixed amount through the bond market versus rate based payments are two of the four options under consideration. (Note, Option 1 is do nothing.) The city’s outstanding debt is shown below. An additional option is a parcel tax on all property owners to cover the sewer plant chloride mitigation project. 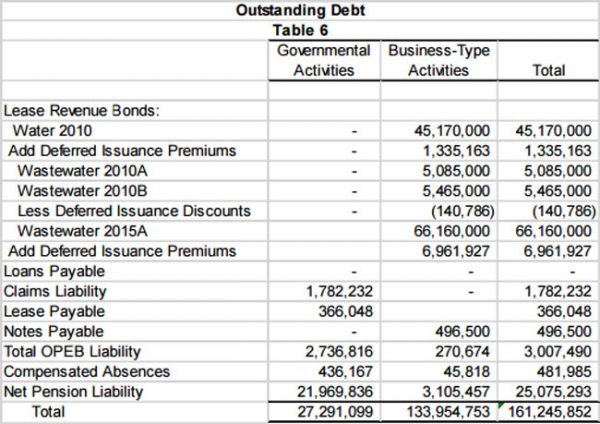 The Water 210 bond was $55,000,000, but the city still owns $45,170,000. Unfortunately most of this was spent already, half of which went to pay off the 2003 debt, so it would clear up the balance sheet, while the remainder was spent on water projects. The Wastewater 2015A was the purchase of the sewer plant in 2015. The chart does not show unfunded pension liabilities.

The consultants are concerned about more debt, as is the Finance Director and the City Manager, who previously was anxious to borrow millions to renovate and relocate City Hall functions . Read about that plan here.

These two charts compare the various options on rates. Note that option 4, a parcel tax, has not been analyzed yet for the sewer chloride mitigation project, which is why it is not shown on the chart. It would be up to the property owner whether or not to pass this tax on to renters, if the property is occupied by tenants. 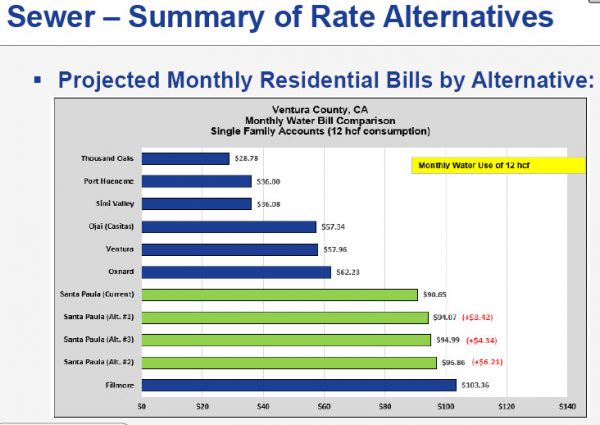 The consultant said that the comparisons to other cities will change as these cities adjust their rates. The consultant added that the data in their model extends 20 years, but for Proposition 218 compliance only five years will be presented to voters. However, none of the council members asked to see the values in 20 years.

City Manager Rock made the statement that on a $60 bill a 10% rate increase would “only be $6.00”. Evidently CM Rock missed the course on compound interest.

Other options are to slow down the water projects and/or find grants. The city has applied for a $25 million grant to upgrade Harvard which would reduce some of the bonding needed for various projects.

The history of the sewer plant and the necessity for the chloride mitigation project is described here. One can only wonder why Limoneira would want Santa Paula’s heavily chloride laden water for their prized lemons. There would a major investment in a Reverse Osmosis (RO) plant and a pipeline to Oxnard for the brine, all of which is possible, but expensive, unless of course, Limoneira has plans for non-agricultural activity on this land. Read CFO interview here.

The rate analysis is further complicated by the requirement to adhere to California’s Proposition 218, which says that the cost of city services must reflect the actual value delivered.

Santa Paula has had a policy of transferring monies from the enterprise funds to the General Fund for decades. The last five years of transfers look like this:

These transfers have never been subject to a Proposition 218 audit for compliance to the law.

There was a discussion about subsidies. The consultant confirmed that the city was free to offer subsidies to low income or seniors, but these subsidies must be paid from other funds. In other words, the ratepayers cannot subdize the subsidies.

There will be a public meeting on August 5th 2019 at the Community Center. The goal is to pick an alternative and mail out the protest ballots to all ratepayers by the beginning of September from which time the protest period is 45 days.

We need to amend the contract with the county fire annexation, negotiate a lower rate or go to Cal fire it would have been cheaper. 79% is crazy.