At the September 4, 2019 Santa Paula City Council meeting, the council voted to present two rate increase alternatives to the citizens for a vote, one for water and one for sewer. The alternatives chosen were: 1) Raise water in a declining pattern for five years: 15%, 13%, 11%, 9%, 9% and 2) raise sewer 3% annually for five years.

But what does this mean to the average ratepayer? This was a question from Citizen Marshall, who asked in Public Comments: How can this be simplified? Let’s try to break down both water and sewer.

Starting from the Top: Water

It is essential to understand that the rates just mentioned do not apply to individual bills. These increases apply to the overall revenue needed to support the Enterprise Fund each year. Thus, a 15% increase in the Water Revenue must be recouped from the individual water users who are classified by pipe size, irrigation and/or fire charges. Generally single family residential in Santa Paula has been upgraded to ¾” pipe. Then on top of the fixed charges by pipe size, there are volumetric charges which are constant across the different pipe sizes. 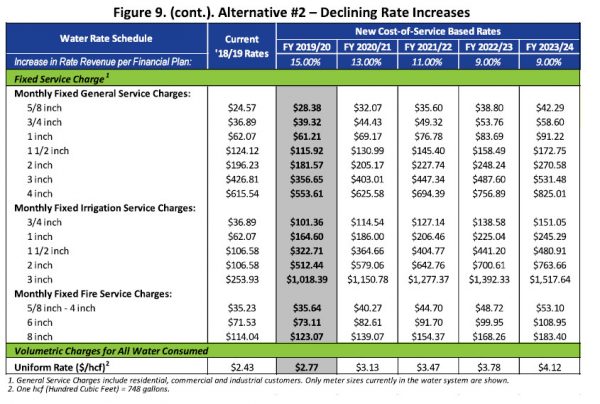 The chart above shows the different categories of piping infrastructure; however, most residential single family is 3/4” pipe. Note that the volumetric rates are the same for all water classes. The volumetric is expressed as dollars per hundred cubic feet ($/hcf) which is shown on the bill as a whole number under “Meter Reading”. For example, a usage of 400 means 4 hcf (hundreds of cubic feet).

Go to your bill and find the following rectangular area entitled “Meter Reading” to determine the HCF. In the example below, 400 cubic feet means 4 HCF (hundred cubic feet).

Starting from the Top: Sewer

The sewer categories are broken down by the type and amount of materials sent to the sewer plant: single family, mobile homes, multi-family, commercial and restaurants. 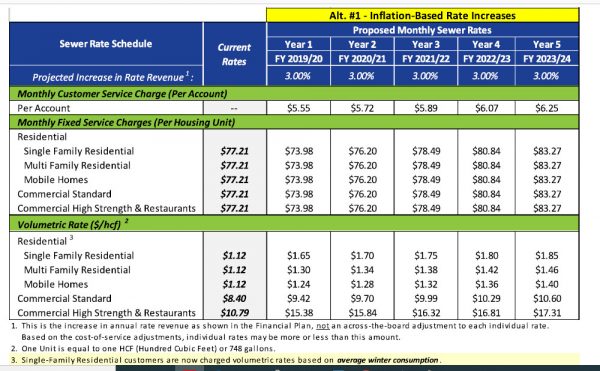 The base rate on a Single Family Residential is $73.98 plus the service charge of $5.55 year 1. The volumetric charges are based on the three lowest billed month of the water usage. This is a new feature made possible by the Finance Department which is designed to normalize the property owners with large lots and larger landscaping needs. Using the previous HCF of 4, multiply this by $1.65 equals $6.6. Remember that the HCF on the new sewer bill will be the average of the lowest three months and not just one month, as this example shows. So the new sewer bill could be $5.55 +$73.98+$6.6 or $86.13 year one, if the volumetric average for the lowest three months was 4.

Sheryl Hamlin asked three questions: 1) What is the backup plan if the refinancing plan for the bonds does not match the interest rate in the consultant’s model? In other words, if the bond salesman is only able to sell 2.5% bonds but the consultant has used 1.5% in the model, how will the model be adjusted? 2) Does the state law require the rates to be changed each year if more revenues are collected than expected? 3) Because the water plan does not include enough monies to fund the chloride reduction project, now estimated at $15 million, will another 218 process be required to fund this?

The Interim City Manager suggested that the answer to number 1 would lie in the budget process. The City Attorney said that the rate in the model was the max, per Proposition 218, but the city does not have to raise rates to the maximum each year. Question 3 was not addressed.

Council Member Sobel asked about subsidies for low-income or seniors. This type of subsidy is illegal if Enterprise funds are used, but the City could set aside some General Funds for such a subsidy or could have a check box on the bill asking citizens to donate to a subsidy fund.

Council Member Sobel asked about mapping cash flows to the CIP (Capital Improvement Program). This was the weakest part of the consultant’s presentation, but per the consultant’s report, there will be a complete P&L (Profit and Loss) for each option in the final report. Public Works Director Saunier said the CIP is reviewed regularly with adjustments made to estimates.

Council Member Crosswhite pointed out that the lowest months may not always the the same, so the Finance Director Ramirez said they could recalculate this each year rather than use fixed months as shown in the consultant report.

Council Member Araiza said he wished the council had spent this much time analyzing the “ridiculous raises”. He also said that this council had inherited this deferred action from previous councils.

Council Member Juarez said the city “kicked the can ten years”. The lower the raise, means another study sooner and vice versa.

The council voted unanimously to present these two options and a protest ballot to the rate payers. Note that all materials will be distributed in Spanish.

For more information about the author: sherylhamlin.com

For the record, here are my objections to the water and sewer rate increases:

Allison, no the water will not improve until there is a city wide water softening plant as a start. The water is hard and the salinity is increasing. This article explains how the growth in civilization and drought affect fresh water. https://blogs.darden.virginia.edu/globalwater/2018/02/15/the-hard-and-soft-of-freshwater/

Secondly because the water is hard, people use water softeners in the home which use salt to pull the minerals from the water. This salt ends up in the wastewater plant which ends up in the percolation ponds where the salt laden water spreads. The Santa Paula wastewater plant was built without chloride containment. Measurements show chloride increasing near the plant.

The new rates include money to fix broken water pipes but nothing for the sewer system, where they are contemplating more bond sales down the road.

Will the water improve using new pipes?
Because it still isn’t great water, I call it mediocre, no kidding.

Sheryl, I now understand, although they were in the original posting, your explanation that the percentage increases refer to the overall revenue requirements and not individual rates. But what surprised me was the disparate effects on ratepayers with different size connections, especially the increases for Irrigation Service which in 2023/24 will be 4 to 7 times the current charge.

Tom, the percentages relate to the total increases in revenue to the fund, not the individual rates. There is another matrix of classes and volumetric that will add up to the total assuming those consumption patterns continue and the 2% growth rate in the ratepayer base is achieved which is built into the model.

The pipe size and the HCF will be added to the new bill in the future, so it will be easy to verify your bill using the rate table and these two items.

Well presented, with a good analysis.