“The day that my communications director ran into my office and showed me the nudes and private text messages that had been published on a right-wing website called Red State, everything came crashing down.”

Los Angeles Magazine calls her the “Republican operative” who brought down Katie Hill. Reporter and Deputy Managing Editor for Red State, Jennifer Van Laar, and I met in Simi Valley to discuss her latest undertaking with Save California and the plan to make California golden again.

Van Laar grew up in Simi Valley and began her writing career in 2012 with United Liberty, a libertarian blog, although she identifies more with small government and individual liberty rather than any political party. Her social circle included political commentators Kurt Schlichter, Caleb Howe, and Larry O’Connor, friends of Andrew Breitbart.

She went on to write for the political website, Independent Journal Review, and also helped with the 2014 campaign that witnessed Steve Knight elected to two terms in Congress before newcomer Katie Hill unseated him in the 2018 mid-term election.

Her experience led her to a job writing for Salem Media’s conservative news site RedState, where she would gain notoriety and hatred for exposing an illicit affair between freshman Congresswoman Hill and a female campaign staffer. Hill’s estranged husband also accused Hill of an affair with her finance director, Graham Kelly, a violation of House Ethics rules. Hill denies the allegation.

Exposing corruption, however, is just one of the legs in her latest endeavor, “Save California.” Save California aims to “build a grassroots network of activists/campaign volunteers.” Goals include fighting for justice reform, changing ballot harvesting laws, increasing funding to get mentally ill people off the street, equipping people to run for office, and penalties for unions engaging in retaliatory behavior toward workers who wish to opt out.

Saving California is a long term vision that will require time, money, and volunteers. Van Laar believes it will take at least ten years to turn things around in CA. As Executive Director of the Saving California PAC, Van Laar envisions opening grass roots centers throughout the State teaching free market and constitutional principles as well as offering classes such as “How to Start A Business,” resources on how to run for office, economics, and home economics classes. She’s hoping people can take these tools back to their families. Save California will “be part of the community.” She also envisions a multi-media component with “videos and social media.”

“Why do Californians elect so many Democrats? It’s important to understand that with the state’s top-two primary system there are a number of races in which the ONLY choices are Democrats,” wrote Van Laar.

During her work to get out the vote in 2018, Van Laar analyzed voting data and identified a group she calls, “the forgotten voter,” people who switched their affiliation to “no party preference” and have only voted once in the last five elections. She realized that reaching a fraction of this group could have a major impact on swing elections.

The Save California headquarters share space with the recently launched Republican Values Center. Mayor Mashburn and congressional candidate Ronda Kennedy touted the center in a video during the grand opening.

Locally, Van Laar has joined forces with Simi resident Joe Piechowski to recall Simi Councilmember Ruth Luevanos for ethics violations. Luevanos gained national attention when she made a video warning of local ICE raids and claiming the United States was running concentration camps. Van Laar says, “We know the signatures are out there, but we need volunteers.” Some residents are concerned about the cost of a recall election, but Van Laar believes it’s “cheaper to get her out” considering Luevanos litigious reputation and Human Resource complaints she’s filed against co-councilmembers. 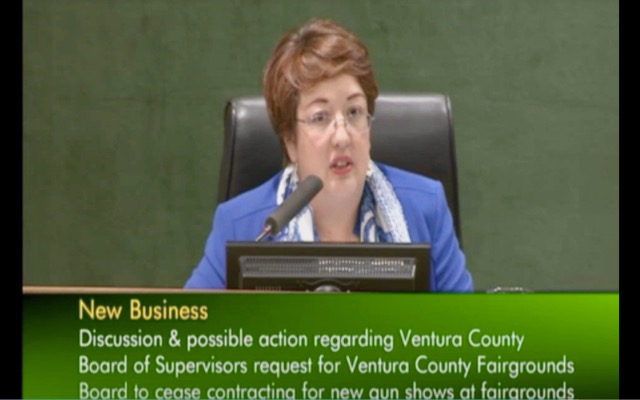 WHAT CAN YOU DO?

Many California conservatives are frustrated by the current state of education, homelessness, the economy, crime, etc. Usually, the problems are easier to see than the solutions leaving many to ask, “What can we do?” Van Laar proposes the following:

Van Laar says it’s time for more Citizen Journalists and stressed the importance of keeping an eye on elected officials’ Federal Election Commission (FEC) filings. She said that politicians are “getting brazen” because no one is looking. “Big stories are happening all around us. The main stream media won’t cover it unless it’s something that promotes their interest,” said Van Laar.

When citizens notice corruption, it’s important to “record and collect evidence” and report it to journalists or groups like the Firearms Policy Coalition, a national organization based in Sacramento, which has “expert constitutional attorneys on retainer to defend first, second, and fourth amendment issues,” according to Van Laar.

While many have fled California, Van Laar says she’s “optimistic about life and people.”

We need to hear more about Ms. Laars.