Sacramento, CA (November 17, 2020) — On Wednesday, December 2nd, from Noon to 2 pm in Sacramento, 2020 Women on Boards will present a panel of private and public sector leaders who played key roles in the passage of SB 826, the historic California law requiring at least three women directors on the board of every public company headquartered in the state by year-end 2021. Companies that don’t comply face significant financial penalties. With 13 months before the deadline, 2020 Women on Boards will explore and lift up the business advantages of having women on boards, and educate women attendees about how to navigate their careers toward corporate boards at its Sacramento event. 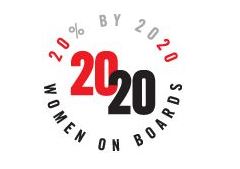 A global nonprofit campaign, 2020 Women on Boards was founded ten years ago to track progress of women on boards among the Russell 3000 corporations, and publishes its Gender Diversity Index with annual statistics. For the year 2020, the national average is its highest ever—at 22.6% of all Russell 3000 boards seats held by women, up two points since 2019. And California beats the national average—with 25.7% of the board seats in the state held by women.

The 2020WOB Global Conversation on Board Diversity is staged over three weeks in 28 cities across the country and four international capitals in late November, early December. Sacramento is the only city where SB826 will take center stage along with the leaders responsible for its ultimate passage in September of 2018. Since enactment in January 2019, more than 200 women directors have been added to California’s public company boards; and by the end of 2021, when three women directors will be required, another 600 women will join California public company boards.

Co-chairs of the event are Jenine Jenkins, owner of J. Smith & Co. in Sacramento and Betsy Berkhemer-Credaire of Los Angeles, CEO of 2020WOB. The National Association of Women Business Owners of California (NAWBO-CA) is co-hosting the December 2nd event.

NAWBO-CA (and its 11 chapters in the state) was instrumental in the campaign to pass SB826. California statewide president Vikita Poindexter is on the Leadership Committee, along with Margaret Strong, president of NAWBO Sacramento Valley Chapter; Lori Kammerer, NAWBO-CA lobbyist; Annie Lam, from Sacramento and Long Beach, Executive Director of the League of California Cities, and Erica Dias, VP Marketing of Safe Credit Union, Sacramento.

Corporate Directors from California companies will facilitate Breakout Sessions to informally coach and enhance knowledge of attendees seeking to someday serve on corporate boards. Director/Coaches include Sharon Garrett of Los Angeles, on the board of Ross Stores; Angela Brock-Kyle from New York, on boards of Hunt Companies, and Guggenheim Funds; and Yvette Chappell-Ingram, from Los Angeles, CEO of the African-American Board Leadership Institute, and retired from California Dental Commission.

2020 Women on Boards is a 501c3 nonprofit dedicated to advancing more women to corporate boards through education, collaboration and advocacy. Its first goal of 20% board seats held by women was achieved a year early in 2019. Now as 2020WOB turns the page to 2021, its new vision will focus on Gender Balance on boards—that means roughly half of all board members will be women, no matter how long it takes to reach that goal.

Tickets ($150) and sponsorships to the 2020 Women on Boards event in Sacramento are available at 2020WOB.com/Sacramento.

About 2020 Women on Boards (2020WOB)
2020 Women on Boards (2020WOB), a 501(c)3 nonprofit, is the leading education and advocacy campaign accelerating gender balance on corporate boards of directors. Each year, 2020WOB publishes its Gender Diversity Index online, open to the public, to reveal how many women are on public company boards of the Russell 3000 in the U.S. The annual Global Conversation on Board Diversity is the primary showcase of current directors on boards. The 2020WOB mission is to Educate. Collaborate. Advocate.

Whatever happened to having the ability to hire the most qualified person, regardless of their race, gender or other status? I hope that more businesses move out of the DPSRC to get away from the business destroying regulations. I know that I would never start or maintain a business here.