Parents with children enrolled in the Scottsdale Unified School District were appalled when they uncovered that one of the district’s school board members had editing access to a Google Drive that included personal pictures and information on a slew of outspoken parents, including their social security numbers, a divorce proceeding, and financial records.

Mother Kim Stafford uncovered a Google Drive link when school board President Jann-Michael Greenberg sent her an email accusing her of “anti-Semitic” comments against billionaire George Soros. Greenburg sent Stafford a screenshot of his desktop, which included a since-deleted Google Drive URL reviewed by the Daily Caller. The drive was available to anyone who had the link. 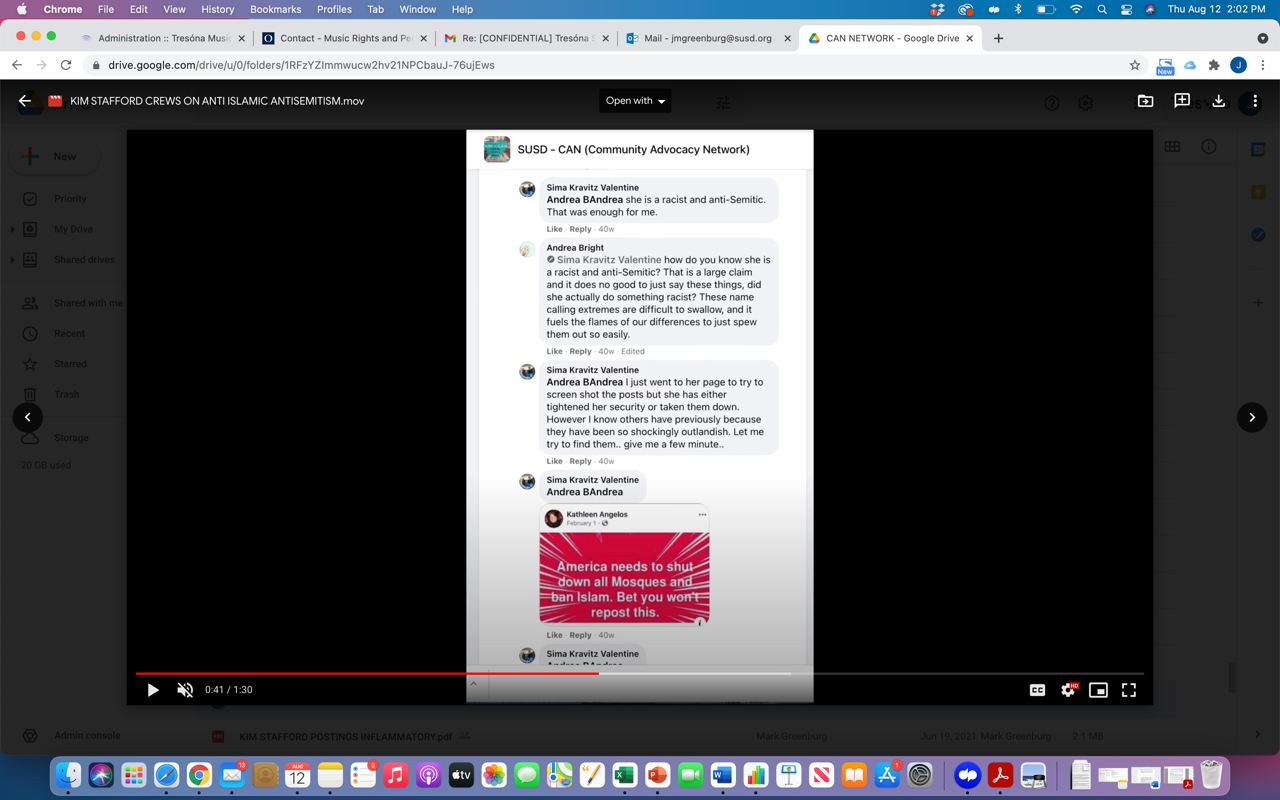 Stafford shared the link with her friends, including Mother Amanda Wray who told the Daily Caller she was “disgusted” when she saw that the drive included pictures of her 8 and 10-year-old daughters.

Parents have since dubbed the Google Drive an “online dossier.” The folders housed within the dossier are labeled “SUSD Wackos,” “Press Conference Psychos,” and “Anti Mask Lunatics,” among others. Included under “Press Conference Psychos” was a video that shows parents calmly holding signs that read “CRT is Racist” and “SUSD We Demand Transparency.”

The dossier takes specific aim at the concerned parent group “Community Advocacy Network” (CAN). Administrators and founders of CAN’s active Facebook page have folders dedicated to screenshots of their Facebook comments, pictures of them with their husbands, and in some cases financial records.

Wray, one of the concerned parents and leaders of CAN, was a top target of the online dossier. The folder has a credit deed of trust from Desert Financial Federal Credit Union, her mortgage, information on Wray’s AirBNB property, and pictures of her children.

Wray told the Daily Caller that her first dust-up with the school board was in January when she criticized Greenburg for “making a political rant during a school board meeting that’s supposed to be non-partisan.” She feels she’s been unfairly doxed by the publication of her information.

Parents have largely been concerned with the school board’s handling of mask mandates and their alleged lack of transparency.

Other posts detailed in the Google Drive include a PDF with members and moderators in CAN’s Facebook group, the personal documents that show portions of parents’ social security numbers, parents sharing pro-Trump signs or Thomas Sowell quotes, and one parent’s divorce proceeding. (RELATED: Arizona School Board, Police Coordinated To Spy On, Arrest Concerned Parents)

The dossier also appeared to harbor opposition work against Amy Carney, a concerned parent who announced recently that she plans on running for Scottsdale Unified school board in Nov. 2022.

The elder Greenburg can be heard in bodycam footage reviewed by the Daily Caller calling Wray a “lunatic.” He also admitted that he pulled up to Wray’s car on his motorcycle with his license plate covered and said he had a private investigator “who’s writing down all of [the parents’ license] plates.”

Both Wray and Carney described the Greenburgs as “bullies” and “trolls,” who do little to quell the real concerns of parents. Carney said that if parents criticize the younger Greenburg, “the dad goes after them.”

The elder Greenburg has a history of harassing his political opponents. In 2019, he was unmasked as the anonymous author of a parody website that mocked school board leadership, according to a local Scottsdale news outlet.

School board member Greenburg denied involvement with the dossier to the outlet Independent NewsMedia. When asked whether his father had access to the Google Drive, Greenburg said that he’s not his “father’s keeper.”

“I have been sent screenshots of what is done on CAN. I have been sent videos, and yes, from parents, including my own father,” Greenburg said. “Yes, people send me emails and text messages, but I don’t store them, and I don’t know who stores them if that is what you are asking.”

Scottsdale Unified School District has remained silent on the issue. Nancy Nooman, the district’s spokesperson, picked up the Daily Caller’s phone calls twice and mumbled, though she did not respond to any official inquiries.

Jann-Michael Greenburg did not respond to a request for comment.