In observance of the 48th anniversary of Roe v Wade …..

NEWBURY PARK—Godspeak and Chino Hills Calvary featured Seth Gruber and Frank Turek this past Sunday speaking up for the unborn prior to today’s 48th observation of Roe v. Wade Supreme Court decision of 1973 that has legalized the killing of 62 million innocent babies that have been aborted by Planned Parenthood and other abortionists in the United States.

“We need to be witnesses of human life; or are we going to water down the Gospel? Will “we worship a prenatal God?” asked Seth Gruber speaking Sunday evening Jan. 17 at Godspeak Calvary Chapel. “The abortion industry has shown us who they are over the past decade. I’ve never seen such shameless abandon.” 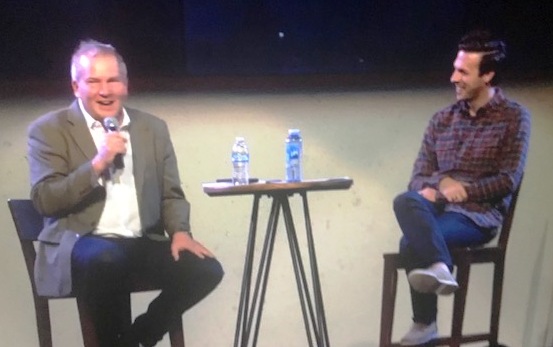 The four flashpoints of 2020 according to Gruber:

The abortion industry depends on arguments about a baby’s size, level of development, location in the mother’s womb and dependency on the mom as reasons to abort the unborn stated Seth Gruber.

“Radical abortion legislation is like what Hitler was to the Jews. This is what Joe Biden and Kamala Harris are to (unborn) babies.”

Editor’s note: several photos were submitted with this article that may be disturbing to you. After talking it over with the author, we agreed that they may be needed to help make the point. We display one below and the others you can click to view. It is evident that these are not just “clumps of cells” as “pro-choice” (abortion) advocates claim.

Frank Turek: “Are you being deceived” about abortion?

CHINO HILLS—Frank Turek’s pro-life message delivered in the Sunday morning services held Jan. 17 at Calvary Chapel Chino Hills was titled: “Are you being deceived to death?” The questions he asked his audience:

“Is the unborn child a human being? Do you have a private right to murder?…Not all sin is the same. There is a moral hierarchy.”

“Are we sacrificing our children to Molech (the pagan god)? Are we hearing the screams of our own children? God is grieved.”

A moral response to abortion nationwide and locally

On the American front—a group of 31 pro-life Senators, led by Sen. Tom Cotton (AR), took action in December to block Planned Parenthood from getting its hands on federal relief funds in the second round of loans intended for small businesses and not for the billion dollar abortion organization with more than 16,000 employees.

Some 37 out of 49 Planned Parenthood affiliates received a total of $80 million from the Paycheck Protection Program (PPP) as part of the CARES Act during the first distribution of federal funds early this year–which were intended for businesses with less than 500 employees.

According to data compiled by the Worldometer (with data from the World Health Organization) over 42 million abortions occurred worldwide in 2020—far surpassing the total of people who perished as a result of the world’s leading causes of death.  By comparison, communicable diseases killed a little more than 13 million people. About 8.2 million lost their lives to cancer; nearly 5.1 million and 2.5 million succumbed to death as a result of smoking and alcohol.

Likewise, the Susan B. Anthony List and Charlotte Lozier Institute stated that 95 percent of Planned Parenthood’s services revolve around abortions.  “We are a proud abortion provider,” said Planned Parenthood President McGill Johnson to The Washington Post. “We believe that abortion is health care.”

Live Action reports that Planned Parenthood accounts for 40 percent of all abortions performed in the U.S. Government funding received by the abortion provider has more than tripled in the past two decades to over $600 million. Planned Parenthood has boasted that they have broken their own record by killing 345,000 babies during the last reported year in the United States.

Meanwhile, the local Planned Parenthood clinic in Thousand Oaks has been the scene of peaceful protests this past month as pro-lifers have gathered to pray and light a candle for the unborn.

Privileged males with religious axes to grind are simply in no position to understand or make moral judgement about women’s bodies. Start solving the injustices that lead to abortion and stop blaming the victims.

If you are serious about banning abortion you could get rid of 98% of them by the following measures.
Father a child, you are on the hook for at $1000/mo to mom and baby from conception to age 18, adjusted for inflation. If father can’t the government pays. We all value children. Active antiabortion folks sign up to be guardian aunties, available to care for a sick child so parent can go to work. Act as a support for parents in a million ways. Assist with transportation, school work. Etc for parents without a social support network. Make sure there is easily available contraception and sex education, paternity leave. The energy used on pro life issues could then be focused on out dismal foster child programs
Or tax and regulate sperm.