The memorial freeway includes three miles of the 101 from Hampshire to Lynn Rd. More than 300 people and several news agencies were in attendance at the private event.

Sgt. Helus, a 29 year veteran of the Sheriff’s department, was gunned down one year ago in his effort to rescue hundreds and stop an active shooter at the Borderline Bar & Grill in Thousand Oaks, CA. Tragically, his life ended at the same building where he proposed to his wife, Karen.

The Ventura County Sheriff’s honor guard opened the ceremony with the presentation of colors, followed by the pledge of allegiance.

Helus was remembered as a Sergeant who enjoyed instructing and encouraging younger officers. In brief remarks, Mayor McCoy said that Helus shared his faith and quoted Romans 13:4 describing Helus as “the minister of justice, a revenger to execute wrath upon him that doeth evil.” He added John 15:13, Greater love hath no man than this, that a man lay down his life for his friends.”

Irwin fought tears, remarking that “Ron made the ultimate sacrifice.”

The memorial sign, flanked by U.S. and CA flags, was draped in royal blue cloth and wrapped with a ribbon and bow. Karen and Jordan Helus came forward as a replica of the sign was unveiled. Monitors to the side played video of the actual sign currently displayed on the freeway. Following the unveiling, the Helus family departed to drive by the Sgt. Ronald Lee Helus Memorial freeway sign.

Thousand Oaks Mayor Pro Tem Al Adam said, “Ron was a hero,” and “families don’t want loved ones forgotten.” He believes the tragedy “draws you closer to your family.”

Councilman Ed Jones said he was “in awe of what Sgt. Helus did that night.” Jones mentioned that he had attended a Vegas shooting fundraiser at Borderline and wants more gun control. 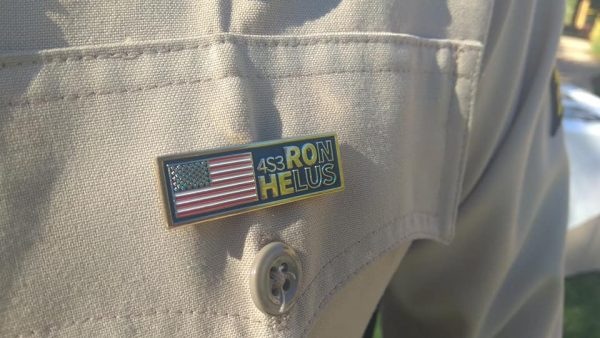 Thursday morning, on the one year anniversary, families of all 12 Borderline victims will gather for a private dedication of the Healing Garden at the Lakeside Pavilion of Conejo Creek North. The park will open to the public at 2:30pm.