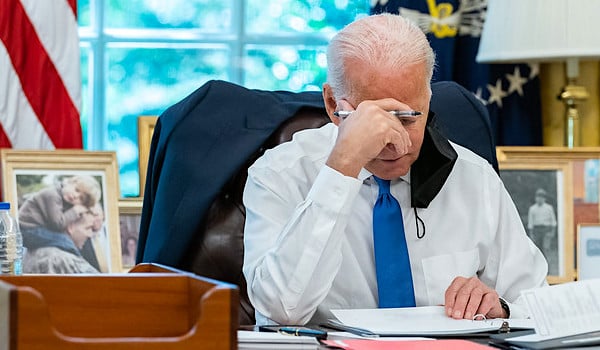 President Joe Biden reviews remarks he will deliver about the situation in Afghanistan, Thursday, Aug. 19, 2021, in the Oval Office of the White House. (Official White House photo by Erin Scott)

A new Marist Poll shows that a plurality of Democrats want Joe Biden removed from their party ticket in 2024.

The Washington Examiner characterized those Democrats as “questioning whether President Joe Biden can lead the party to victory in a 2024 presidential election as his polling collapse continues.”

Celinda Lake, a Democratic pollster, said in the report, “People are upset, people are frustrated … Voters see things getting worse.

And the Mediaite pointedly noted “the percentage of Democrats and Democrat-leaning Americans who do not want President Joe Biden to be the nominee in 2024 is higher than those who do.”

It commented, “The numbers are troubling for Biden, who has seen his overall approval rating sink to the low forties. In the Marist poll, his approval rating among all respondents was just 44%, with 49% disapproving of the way he’s handling the presidency. That tracks with a recent NBC News survey that had Biden at a 42% approval rating.”

Other polling has put Biden’s approval rating well down into the 30s.

The New York Post noted that 44% of Democrats want Biden off the ticket, to only 36% who want to keep Biden atop their ticket, while on the other side of the fence, 50% of Republicans and GOP-leaning independents think former President Donald Trump is their party’s best chance for success in 2024.

The poll also addressed the issue of Americans’ trust in elections, following the 2020 results that may very well have been skewed by several factors.

One was that Mark Zuckerberg of the company formerly called Facebook lavished $420 million on two groups that then handed out the money to mostly leftist elections officials with instructions often to go out and recruit voters from Democrat-leaning regions.

States have responded by developing bans on allowing private money to be used for such functions.

The other issue is that some elections officials simply changed state law to accommodate mail-in ballots which favored Democrats, even though constitutionally the only ones who could do that are state lawmakers.

Further, there was legacy and Big Tech media suppression of damaging information about Hunter Biden, and the links there to Joe Biden. One Media Research Center poll showed enough people would have refused to support Biden had they known what now has been documented as fact that Biden would not have been elected.

The poll revealed a majority, 62%, of Americans say they will trust the results of the 2024 election even if the candidate they support loses.

Significantly, that includes 82% of Democrats, whose candidate likely benefited from whatever misbehavior may have taken place in 2020, but only 33% of Republicans.

“More than eight in ten (81%) Americans believe there is a ‘serious threat’ to our democracy including 89% of Republicans, 80% of independents, and 79% of Democrats. But when asked which party presents the bigger threat, there’s a split: 42% say Democrats, 41% say Republicans, and 8% say both,” the poll explained.

Thirty-nine percent of the respondents said they do not believe elections are fair.

And 75% of Republicans believe President Trump “has a legitimate claim that there were ‘real cases of fraud that changed the results'” in 2020.

“Americans agree that our democracy is threatened but strongly split along party lines as to the causes,” explained Lee M. Miringoff, director of the Marist College Institute for Public Opinion. “When looking ahead to the 2024 presidential election, it is remarkable that a bedrock principle of democracy – that losing candidates and their supporters accept the results – is not held by nearly two in three Republicans who say they will question the results if their candidate does not win.”

The results supported the charge that leftists and progressives in America have moved as far from the traditional and conservative ideals that have supported the country for generations as they ever have.

“Asked about states that have conducted additional recounts of the 2020 presidential results, a majority of Americans (53%) say they have been done ‘mostly because state officials just don’t like the outcome.’ But while 84% of Democrats and 56% of independents hold this view, 76% of Republicans instead believe the recounts occurred ‘mostly because there are real cases of fraud in these states,'” the survey said.

“Significant numbers of Republicans question election integrity at every level. Even with elections in their own communities, one in five Republicans (20%) say they have ‘no confidence at all’ that local elections boards will conduct fair and accurate elections in 2022,” it continued.

It shows 29% of Americans say the biggest threat to fair elections is voter suppression but 21% say voter fraud and 18% say vote tampering by the opposing political party.