Silence is Not Consent in Politics, Either

When you undergo a medical procedure or volunteer for a research study, you’re presented with forms to sign, outlining what’s going to happen (and what bad things could happen), and expressly consenting to have those things happen.

If you’re accused of rape, “he or she didn’t physically resist” isn’t an acceptable defense. In fact, express consent is the emerging standard, sometimes to seemingly ridiculous degrees (i.e. re-requesting consent at each stage of an encounter).

Consent, I think we can agree, is a big deal in America today.

It was a big deal in 1776, too, when Thomas Jefferson asserted in the Declaration of Independence that  governments “deriv[e] their just powers from the consent of the governed.” Consent is a central issue in the 27 colonial grievances listed in the Declaration, one of which (“imposing Taxes on us without our Consent”) became a primary battle cry of the American Revolution: “No taxation without representation!” 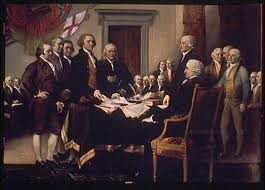 To this day, American politicians proudly claim “consent of the governed” via democratic elections. But that claim conflicts with the known facts.

According to the US Census Bureau, the population of the United States, as of November 8, 2016, stood at 323,781,667. That evening, the winning candidate for President received 62,984,828 votes nationwide. To put it a different way, about 19.5% of people living in the United States consented to Donald Trump’s presidency.

In 2018, Nancy Pelosi was elected to her 17th term as a US Representative from California. That state’s 12th US House District boasts a population of about 765,000. A whopping 35.5% — 274, 035 — of those she claims as her constituents consented to her claim to represent them.

One interesting dodge to the obvious implication — that our politicians don’t truly enjoy the consent of those whom they govern — is that voting implies consent to be ruled by the winner. The minority gets its say, but implicitly agrees to be bound by the results.

But even accepting that argument, it’s a rare election in which a majority of those supposedly consenting to be ruled vote at all, for the winner or otherwise.

Some aren’t allowed to vote: Minors, non-citizen immigrants, prisoners, and, in some states, felons who have completed their sentences. Others choose, of their own accord, to abstain from voting.

They are the silent majority.

They’re not represented, but they’re taxed.

They’ve chosen no rulers, but they’re ruled. And if they resist the rule of the minority and its representatives, they’re caged or killed.

Can government truly enjoy the consent of the governed? Under certain conditions, yes. Small political units operating on unanimous express consent, perhaps interfacing with other such units in a system known as “panarchy,” could work.

But in today’s America, consent of the governed is a fairy tale. America’s politicians enjoy no such consent and should stop pretending they do.

If they are eligible and don’t vote, it’s their own damned fault and they have no right to claim no representation.