SIMI VALLEY – Mayor Mashburn pushed back against Councilmember Luevanos’s argument in favor of raising the sales tax currently pegged to the State minimum 7.25%. He conceded, however, to requests from Luevanos and Mayor Pro Tem Cavanaugh, to forward the staff report to Neighborhood Councils for further input.

Staff, at Luevanos’s request, presented a report to the City Council on potential revenue by implementing a half cent sales tax increase. The city could gain nearly $10 million for the General Fund if the ordinance passed. Luevanos strongly advocated putting the proposal on the November 2020 ballot for voters to decide and argued that a tax increase “would help our economy grow,” and used LA County’s Westlake Village, with a 9.5% sales tax, as an example. Mashburn responded that as a former owner of four retail establishments, “There’s nothing that would hurt my business more than raising taxes.” 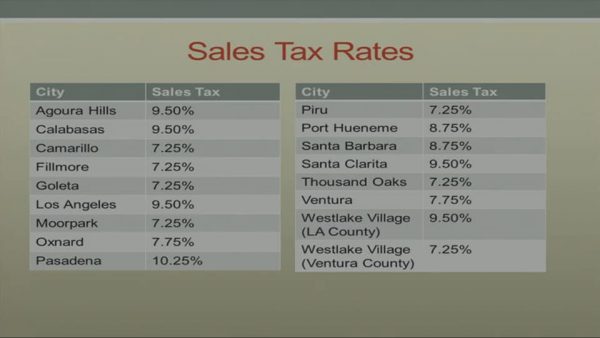 She also had him confirm that the Council had followed the recommendations of the Budget Advisory Committee (BAC) such as “the installation of over 6500 solar panels…retrofitting of over 5400 light fixtures…with LED…new HVAC units, and reductions in overtime.” She then drew the conclusion that the only other thing the Council could do would be to raise taxes.

Gabler responded to Luevanos’s barrage of questions in an exchange that could be compared to a courtroom proceeding between a litigator and witness on the stand, as she made a case for a tax increase. In rapid secession Luevanos continued, “And what could this money go towards? As we face inflation, as we face rising pension costs?

“It certainly could be…”

“So it would benefit the entire community?”

“You could say that.” 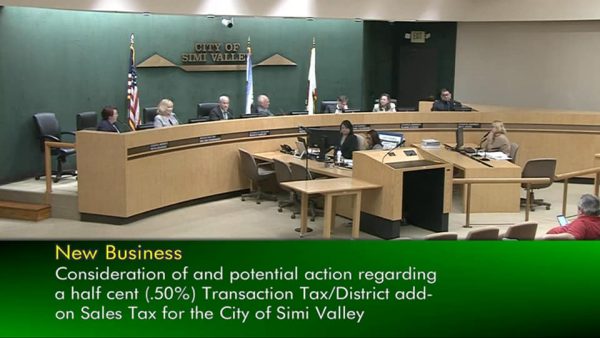 Once she concluded, Judge made a “motion to file the report,” but due to a lapse of formal consideration of parliamentary procedure, the Chair allowed debate to begin before the motion was seconded. It’s possible he thought there were still outstanding questions.

Councilmember Litster argued against the question of raising taxes rather than the motion to file saying, “I feel like I need to represent the tax payers and small businesses.”

Luevanos countered Litster, arguing that people shop where amenities are available regardless of the sales tax incurred. She advocated investing sales tax dollars in infrastructure such as wi-fi corridors to attract businesses and millennials. She also quibbled that Thousand Oaks’ annexed portion of Westlake Village should be labeled Westlake.

Judge called the question, but his effort to limit debate was thwarted without a vote by objections from Cavanaugh and Mashburn. Cavanaugh continued to argue the question of increasing taxes. “They’re going to be taxed on anything that they bring in…but when they sell it to somebody outside of Simi Valley, we’re not going to get the extra tax so…we could be hurting our businesses.”

Despite Cavanaugh’s concern for businesses, she helped Luevanos keep the question of increased taxes alive by requesting input from Neighborhood Councils. When the Chair finally sought a second to Judge’s motion on the floor, Luevanos, instead, was again given the floor, concurring with Cavanaugh and asked to refer the matter to the Neighborhood Councils. Cavanaugh seconded the motion and there was some confusion if she was seconding Judge’s motion or if Luevanos had moved a substitute motion. In the end, the council had a rare unanimous vote to receive and file the staff report, with a side agreement (not requiring a vote) that the report would also be forwarded to the Neighborhood Councils.

California currently has a 7.25% base sales tax to which cities, counties, and other local jurisdictions (districts) may add-on, typically not more than an additional 2%.

Simi Valley has historically managed its budget without additional sales tax revenue. Luevanos questioned the city’s fiscal health and the impact a potential recession could have upon the budget, calling an additional tax the “responsible thing to do.”

There were only two public comments which were divided on the question. Some interesting facts came to light during the presentation. Despite perceptions to the contrary, automobile purchases are taxed, not in the locality where they are purchased, but rather where they are registered. Additionally, the add-on sales tax is not only imposed upon consumers at retail points of sale, but retail businesses also pay it on the wholesale goods they purchase. Not only would consumers be paying an additional half cent tax, but it’s likely that the cost of goods will also increase before the tax is assessed at the point of sale. According to the report “purchases shipped outside of the City will not be subject to an add-on tax.”

The sales tax presentation and debate came during the fourth hour of the council meeting after a lengthy discussion on the need for a 35% increase in sanitation fees assessed in property taxes. Staff denied that the additional fees would be used for unfunded pension liabilities. Public comments questioned the equity of charging different rates for single family homes and multi-family homes. The Council considered these concerns and unanimously voted to postpone the rate increase until they could see data on charging a single rate.

The city’s consultant hypothesized that combining these groups would increase rates for multi-family residences while offering a negligible discount to single family homes since they are the bulk of the residential properties. Luevanos expressed concern about increasing rates for multi-family properties. Councilmember Litster continued to push for a bond measure to spread the increased fees over a longer time period which would reduce the steep immediate impact.

During public comment, Mashburn was reprimanded for his comments and social media posts about a potential volunteer. Simi resident, Joe Piechowski, also assailed Luevanos for accusing him of harassment and calling the police while he manned a table seeking signatures for her recall during the city’s 50th Anniversary celebration. He accused her of not affording him the same first amendment rights that she claims for herself. She responded with the court’s opinion that first amendment rights are limited.

The meeting agenda and video are available online.

The Santa Paula sales tax is 8.25% which is not shown on the chart.