According to the Financial Times, over 40 group executives had personally invested in its investment products – with six of them securing early redemptions. All six will return the money.

“All funds redeemed by the managers must be returned and severe penalties will be imposed,” said the company, which has offered to repay investors with discounted apartments and parking lots.

Shares in the Hong Kong-listed Evergrande fell as much as 18.9% on Monday, sending shockwaves throughout international markets over ‘broader concerns about the health of China’s real estate sector.’ At present, over 500 of Evergrande’s 800+ projects across China are halted – with at least several hundred thousand units which have been presold yet not delivered. To complete construction, the company needs at least 100 billion yuan (US$15bn). 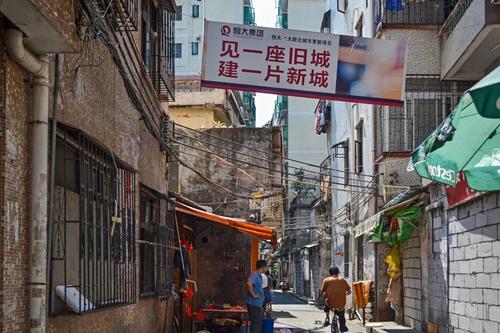 What’s more, Evergrande relies heavily on commercial paper to pay suppliers and construction partners – paying one company, Jiangsu Nantong Sanjian Construction Group, just 8% cash and the rest in commercial paper. At the beginning, commercial paper borrowings consisted of six-month notes yielding an annualized 15-16%. Now, most carry interest north of 20% – with holders unloading at discounts as high as 55% to raise cash.

On Monday, Caixin wrote in an article titled: “How Evergrande Could Turn Into ‘China’s Lehman Brothers’“:

A bankruptcy would amount to a financial tsunami, or as some analysts put it, “China’s Lehman Brothers.” The venerable American investment bank’s 2008 collapse helped trigger a global financial crisis.

Certainly Evergrande, one of China’s three biggest developers, has a giant footprint in China.

Its liabilities are equivalent to about 2% of China’s GDP. It has more than 200,000 employees, who themselves and many of their families have invested billions of yuan in the company’s WMPs. The company has more than 800 projects under construction, more than half of them halted due to its cash crunch. There are thousands of upstream and downstream companies that rely on Evergrande for business, creating more than 3.8 million jobs every year.

A potential default by Evergrande could spread to markets outside China as it has huge, high-interest offshore bonds. Some of its offshore bonds carry interest rates as high as 15%, a person close to the Hong Kong capital market said. UBS estimates that $19 billion of Evergrande’s liabilities are made up of outstanding offshore bonds. -Caixin

As the company’s situation continues to deteriorate, the big question is whether or not a reluctant Beijing will step in for a rescue. According to the report, several state-owned enterprises including Shenzhen Talents Housing Group Co. Ltd. and Shenzhen Investment Ltd. – both of which are controlled by the Shenzhen state-owned Assets Supervision and Administration Commission (SASAC), have been in discussions with Evergrande over its Shenzhen projects, however no deal has been reached according to people close to the talks.

In May, the company offered certain homebuyers 30% to 40% discounts on properties if they paid entirely in cash, company staffers told Caixin.

Evergrande, which denied bankruptcy rumors last week, has hired financial advisers to explore “all feasible solutions” to solve their liquidity issues – and has warned that there’s no guarantee they’ll be able to meet their obligations despite repeatedly signaling that it will unload equity and assets.

Last week pissed off Evergrande investors were joined by unpaid suppliers – who stormed the company’s Shenzhen headquarters and took management ‘hostage‘ by not allowing them to leave. 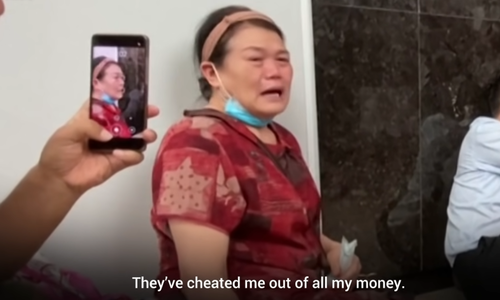 “I have with me Nanchang’s top Evergrande representative surnamed Chen,” said WeChat user Yang Qiwen, referring to the city in Jiangxi province in south-eastern China, in a post accompanied by a photo of a man lying on the floor.

“He can’t leave the office. There are more than 300 of us (investors) stopping him,” Yang added on one of at least three WeChat groups discussing the company’s dire straits. 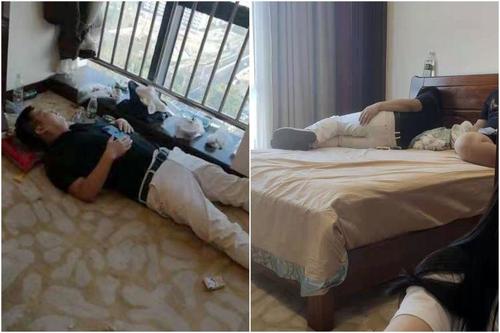 According to senior company executive Du Liang, Evergrande had used at least Rmb40bn (US$6.2bn) from the sales of wealth management products to fund construction projects across the country. Meanwhile, the company owes retail investors, creditors and suppliers an estimated $300 billion.

As the Times notes, “Evergrande’s attempts to calm investor anger highlight the many challenges its debt crisis poses for the Chinese government, which is reluctant to bail out the company even though its collapse could have wide-ranging consequences.“ 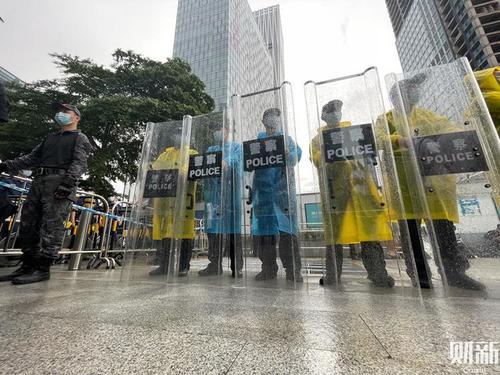 The bait before the switch

One senior Evergrande executive said he personally invested 1.5 million yuan (US$232,000) and encouraged his subordinates to invest 1.5 million yuan into a crowdfunding product issued to executives called “Chaoshoubao,” which translates to “super return treasure.” In 2017, the company sought financing from state-owned China Citic Bank in Shenzhen – which required that company executives personally invest.

The company promised 25% annual interest payments and redemption of principal and interest within two years.

Citic Bank eventually agreed to provide 40 billion yuan (US$6.1bn) of acquisition funds. When Chaoshoubao was due for redemption in 2019, the company asked employees to agree to a one-year extension, with one investor claiming they received an annualized return of 4% to 5% in the last four years, far below the promised 25% return.

Making the Evergrande house of cards even more unstable – the company sold wealth management products to its construction partners – requiring them to simply buy WMPs whenever Evergrande needed to pay them, according to a former employee.

“If the construction companies are owed 1 million or 2 million yuan, we would ask them to buy 100,000–200,000 yuan of WMPs, or about 10% of their receivables,” said the former employee, who added that while it wasn’t mandatory for construction companies to buy WMPs, they would frequently do so in the spirit of cooperation and good relations. Evergrande property owners were also buying the investment products.

“It is difficult for Evergrande to make all of the repayments at once at this moment,” according to Evergrande wealth division general manager, Du Liang.

Evergrande initially proposed to impose lengthy repayment delays, with investments of 100,000 yuan and above to be repaid in five years. After heated protests by investors, the company tweaked its plan last week, offering three options. Investors can accept cash installments, purchase Evergrande’s properties in any city at a discount, or waive investors’ payables on residential units they have purchased.
Some investors opposed the “property for debt” option, as many projects of Evergrande have been halted and there is a risk of unfinished projects in the future.
“The proposals are insincere,” a petition signed by some Guangdong investors said. “It’s like buying nonperforming assets with a premium.” The petition urged the government to freeze Evergrande’s accounts and assets and demanded cash repayment of all principal and interest. -Caixin

While larger suppliers may be able to survive an Evergrande default, small and medium-sized suppliers holding large amounts of overdue Evergrande notes are in a precarious position.

As Caixin further notes, Evergrande has been shedding assets to raise cash – however its largest holdings are its land reserves. As of June 30, the company had 778 land reserve projects with a planned 214 million square meters of total planned floor space, and an original value of 456.8 billion yuan (US$70bn). The company also has 146 urban redevelopment projects – which they’ve spoken to ‘every possible buyer in the market’ to unload, according to the report.

Yet, no deals have been reached – with several real estate developers raising concerns over complex creditors’ rights that make the projects difficult to dispose of.

Meanwhile, the company has been reluctant to sell at a loss.

“In China, land reserves are the most valuable assets,” said Du, the wealth management GM in a recent speech, adding “This is Evergrande’s biggest asset and last resort.”

“For example, for a land parcel, Evergrande’s acquisition cost is 1 billion yuan, and the land itself is worth 2 billion yuan, but the buyer may only offer 300 million yuan,” he continued. “If we sold at a loss, we would have no capital to revive.”

That said, even if Evergrande can quickly unload housing units, it wouldn’t be enough to cover their debts. One banker with billions of yuan in exposure to the company told Caixin that there’s a 99.99% chance they won’t be able to cover interest due in the third quarter.

As Caixin explains, “In the early stage of projects, developers need to invest a lot of money, which could significantly increase the debt on the balance sheet. Companies often place these debts off their balance sheet through a variety of means. After the pre-sale of the project, or even after the cash flow of the project turns positive, these debts would be consolidated into the balance sheet in the form of equity transfer, according to a property industry insider.”

For example, 40 billion yuan of acquisition funds Evergrande obtained from China Citic Bank were invested in multiple projects. Among them, 10.7 billion yuan was used by Shenzhen Liangyang Industrial Co. Ltd. to acquire Shenzhen Duoji Investment Co. Ltd. As Evergrande doesn’t have an equity relationship with the two companies, this item was not required to be consolidated into Evergrande’s financial statement. Evergrande used leveraged funds to acquire equities in 10 projects, and none of them were included in its financial statement, the prospectus of its Chaoshoubao shows.

Evergrande has sold equity in subsidiaries to strategic investors and promised to buy back the stakes if certain milestones can’t be reached in the future. Such equity sales are actually a form of borrowing, too. In March, Evergrande sold a stake in its online home and car sales platform Fangchebao for HK$16.4 billion ($2.1 billion) in advance of a planned U.S. share sale by the unit. If the online sales unit doesn’t complete an initial public offering on Nasdaq or any other stock exchange within 12 months after the completion of the stake sale, the unit is required to repurchase the shares at a 15% premium.

Other hidden debts include unpaid payments to acquire equities – sparking dozens of lawsuits from small property companies who are demanding cancellation of their equity sales agreements due to failure to perform. The plaintiffs are Evergrande’s partners in local development projects – who were usually paid 30% up front, but then shafted on the rest even after projects were completed, according to the complaints. One lawyer for the plaintiffs told Caixin that Evergrande’s project subsidiaries don’t want to cause friction with local partners, but they have no money to pay because proceeds from the projects have been funneled directly to the parent company.

Since April, 49 Evergrande wholly owned subsidiaries have been sued, according to Tianyancha, a database of publicly available corporate information.

As Caixin notes, “Evergrande’s extremely high debt ratio, high financing cost and repeated delays in payments to suppliers, partners and local government show that its liquidity has always been tight, but on the other hand, the fact that it has survived years under this model indicates that it has always been able to generate money, a veteran investor said,” adding “Now everyone is watching whether it can dodge the bullet once again.”